This page details the second generation characters of Fire Emblem: Genealogy of the Holy War. For other characters, head back to the index here.

These units are obtainable regardless of the player's pairing choices in Generation 1.
Seliph (Celice, Serlis) 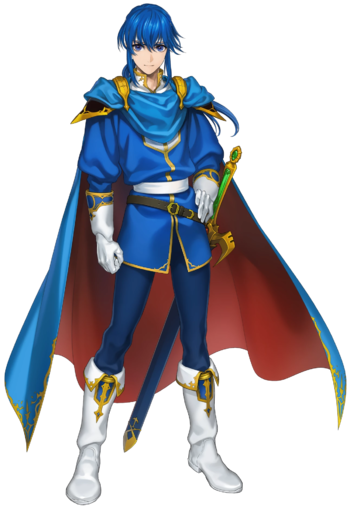 Scion of Light
Class: Junior Lord (FE4), Swordmaster (Awakening)
Holy blood: Baldur [Major], Naga [minor]
Voiced by: Yuuma Uchida (Japanese, Fire Emblem Heroes), Christian La Monte (English, Fire Emblem Heroes)
Sigurd and Deirdre's son, and The Hero of the second part. A shy but strong-willed boy with great swordfighting abilities and a gentle heart, he's now the hope of hundreds of people who see him as the one who can end the tyranny of Grannvale.

Sigurd's cousin and Shannan's best friend, we meet him in Part 1 as a sweet boy who worked as The Strategist for the good guys. After the Time Skip, we meet an Older and Wiser Oifey who helped raise Seliph and the other children, trained Diarmuid in swordplay, and is now a strong fighter. 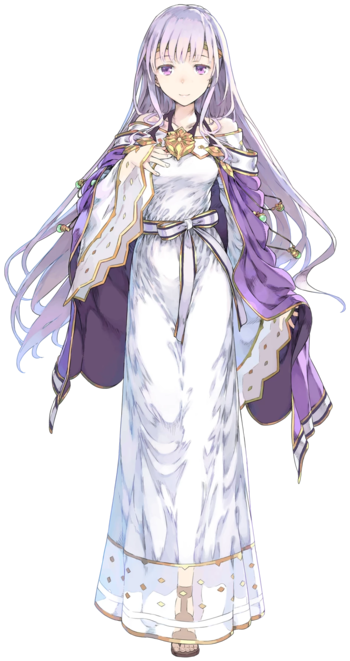 A sweet and shy girl who is somewhat younger than Seliph and his group, and is brought by Lewyn in the group. She has amnesia and has forgotten a good part of her past, but can handle staves and magic tomes well. She is actually Seliph's half-sister, Julius's twin sister, Deirdre's daughter with Arvis, and the second Princess of Grannvale, as well as the one holding major Naga blood in this generation.

The second of the three sons of Danann, the ruler of Castle Isaach and heir of Nál. A mounted axe warrior with a crush on Larcei and a somewhat kinder disposition than his dad. Sadly, he does NOT get along with Iucharba, his youngest brother; therefore, he can't be recruited if you reach for Iucharba first.

The third and youngest of the sons of Danann, the ruler of Sophara and heir of Nál. He is a Hot-Blooded axe fighter who tries to act like a tough loner but has a good heart. Too bad he doesn't get along with Iuchar; therefore, he can't be recruited if you reach for Iuchar first.

Seliph's paternal cousin and the youngest son of Quan and Ethlyn, raised by Finn in hiding.

He is the main protagonist of the interquel game Fire Emblem: Thracia 776, and tropes regarding him over there could be found here. 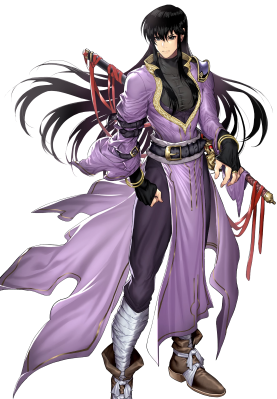 The half-nephew of Ayra and the son of King Mariccle of Isaach. He is the rightful heir to the Isaachian throne occupied by Danann after the Time Skip. Raised by Edain alongside the other kids, he is one of the oldest of the group and has a huge responsibility on his shoulders in liberating his own country. 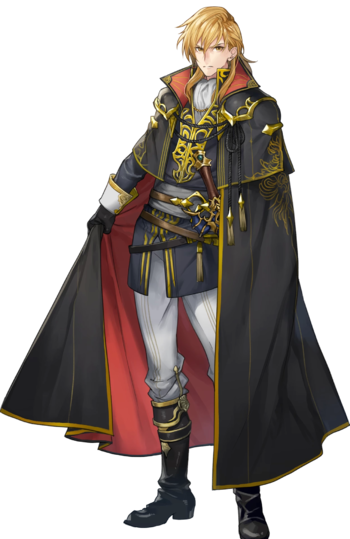 Son of Eldigan and Lachesis' nephew, and the holder of the major Hezul blood. 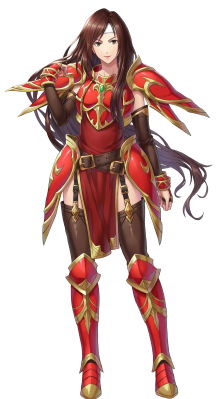 The princess of Leonster, as well as Quan and Ethlyn's daughter and Leif's older sister. Raised by the killer of her parents, Travant, she appears as an enemy but soon starts having doubts about her mission and heritage, thus she can be swayed to your side.

The most powerful general of the Thracian kingdom, and a noble and just person who is very well-loved. Unfortunately, his boss, King Travant, has caught on to his intentions...

Children of Edain
Both
Lana (Rana)

The daughter of Edain, and a quite powerful healer. As strong-willed as she is kind, she's among the first who joins Seliph's quest.

Edain's son, Lana's brother, and Seliph's good friend. He is a skilled archer like many descendants of Ulir. 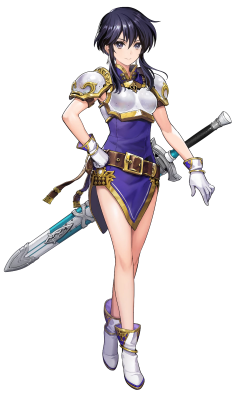 One of Ayra's Half-Identical Twins children, and a Hot-Blooded swordwoman just like her mom. She was raised with Seliph and has a crush on her cousin Shannan, though her romantic feelings can be swayed towards others.

The other half of Ayra's Half-Identical Twins children, also raised with Seliph and Shannan alongside other fugitive royal kids. Levelheaded and soft-spoken, but as strong as his twin sister.

The oldest of Lachesis's children, and a mounted swordsman. Was taught swordplay by Oifey while being raised by Edain.

Diarmuid's younger sister and the other child of Lachesis. Unlike Diarmuid, she grew up in Leonster alongside Leif, and was taken care of by Finn.

A Pegasus knight in training who hails from Silesse, and the daughter of Erinys. 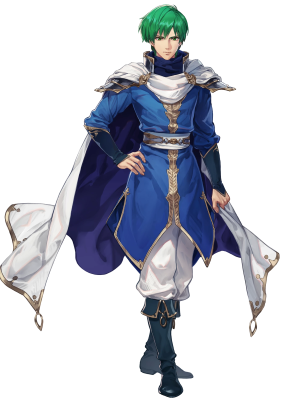 Erinys's son, Fee's brother, and an extremely powerful magic user. He is considered "Ced the Brave" for fighting against the empire.

is he very nice to her, they have pretty high love growth rates, and one of the unlockable opening scenes feature Ced healing Tine after a battle with Hilda and telling her not to push herself too far.

The son of Tailtiu, who grew up in Silesse. Managed to escape from the Frieges and learned Wind Magic in spite of his thunder-magic-oriented heritage, and now he's back - with some bones to pick with his own family and the firm intention to get his baby sister back.

Arthur's little sister and Tailtiu's daughter. She was raised in a very ill-tempered household, thus despite her high magical skills, she's very insecure and shy.

Brigid's daughter, who became a thief to help feed the kids of the Orphanage of Love she and her brother Febail were raised in.

Brigid's son with major Ulir blood and huge archery skills. Was tricked into joining Friege's army, so he has to be brought into the group by Patty. 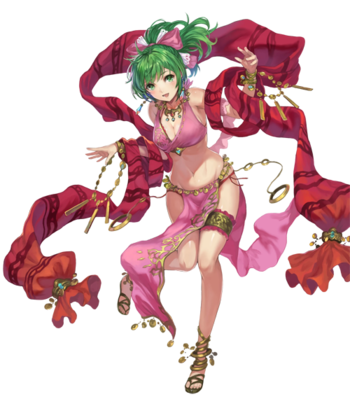 A beautiful dancer and Ares's companion and friend. She is the lost daughter of Silvia, raised in a convent and away from her brother Coirpre.

Silvia's youngest kid, who was raised by General Hannibal... and used as a hostage by his adoptive father's boss, King Travant.

A civilian girl from Issac who was raised alongside Seliph and trained (presumably by Edain) in staff use. Replaces Lana if Edain didn't have children.

A young archer from Isaach as well as Muirne's brother. Replaces Lester if Edain didn't have children.

A beautiful but skittish swordwoman from Isaach, and Seliph's other female friend. Replaces Larcei if Ayra didn't have children.

Youngest daughter of the late Cross Knight Eve, raised by Finn after a turbulent early life. Replaces Nanna if Lachesis didn't have children.

Eldest son of the dead Cross Knight Eve and the brother of Jeanne, raised by Edain. Replaces Diarmuid if Lachesis didn't have children.

A Sigurd and Erinys fangirl who has just achieved her dream to be a Pegasus Knight. Replaces Fee if Erinys didn't have children.

Class: Sage
A talented and famous magician, as well as Hermina's brother. Replaces Ced if Erinys didn't have children.

A wandering mage from Silesse, who has a grudge against the Frieges due to the death of his mother, Bloom and Tailtiu's younger sister Ethnia. Replaces Arthur if Tailtiu didn't have children.

A sweet mage from the House of Friege, and Amid's little sister. Replaces Tine if Tailtiu didn't have children.

A civilian girl who has taken up stealing from the rich to help the Orphanage of Love she was raised in. Replaces Patty if Brigid didn't have children.

A talented and well-known archer known as the Hitman of Conote, and Daisy's brother. Replaces Febail if Brigid didn't have children.

A beautiful and sorta cynical dancer who works with Ares. Replaces Lene if Silvia didn't have children.

The adopted son of General Hannibal, and Laylea's brother — though they don't know it. Replaces Coirpre if Silvia didn't have children.