The 15-year-old protagonist of the series, Allen is a young man who was born with a deformed red left arm with a cross embedded in the hand. His biological parents abandoned him because of this, and Allen was taken in and raised by a man named Mana Walker. When Mana died, Allen was overcome with grief and the Millennium Earl appeared before him with the offer to bring Mana back from the dead. Allen accepted the offer and Mana's soul was trapped in the metal body of an akuma. Mana cursed Allen and tried to kill him to wear his skin, but it turns out that Allen's deformed arm is an Innocence, which then activated and destroyed Mana's akuma body. Allen was later taken under the wing of General Cross, who trained him how to be an "Exorcist" (a person who can use an Innocence to fight and destroy akuma). When the story begins, Allen is on his way to find the Black Order and join the organization.

Allen's Innocence is a "parasite-type", one of the rarest Innocences. Due to Mana's curse, Allen's left eye is branded with a pentacle. However, with this eye Allen is the only one who can see who is an akuma in a human skin, as well as being able to see the tortured soul trapped within. He is a cheerful, kind young man who loves everyone, and has made it his mission to release akuma-captured souls from their pain and suffering.

Allen's Innocence is called the Crowned Clown. In early chapters, it starts as a massive claw; during the Ark Arc, it upgrades to body armor and several new abilities. After achieving General-level synchronization, its final form is revealed: a massive sword that only harms the evil within someone. 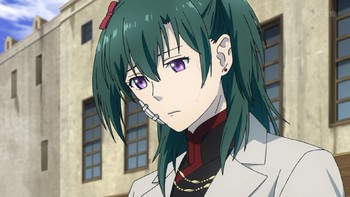 Appearence at the beginning of the series 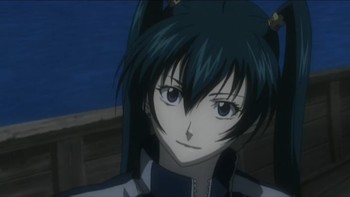 Appearence at the end of the first anime 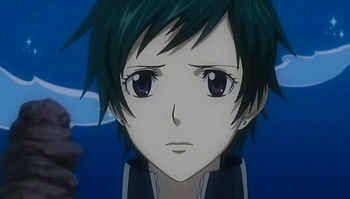 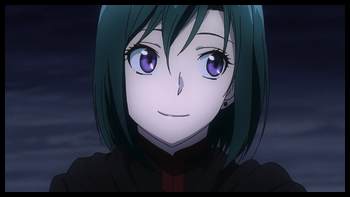 The 16-year-old sister of the Black Order's Supervisor Komui Lee, Lenalee is a powerful Exorcist. After her parents were killed by an akuma, she was found to be compatible with an Innocence at a young age, pretty much abducted by the Order and forced to synchronize with it. After nearly killing herself during several attempts to escape the Order, Lenalee is persuaded to stay when Komui joins to be near her. She is very kind, and fights not for the cause of the 'holy war' that the Black Order is fighting against the Millennium Earl, but for the safety of her family and friends.

Lenalee's Innocence are the Dark Boots. An equipment-type, they allow her to run faster than normal, jump great heights, and make her heels deadly weapons. They have recently upgraded to a previously unseen type of Innocence that forms the user's blood into equipment; this has been termed crystal-type by the Science Department. 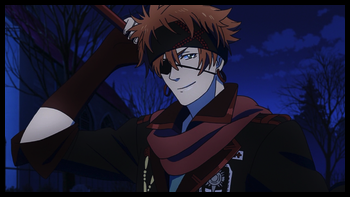 A mysterious young man set to become the next Bookman, a historian who records the secret wars that shape the world. Originally sent to the Black Order solely to document the war between Exorcists and akuma, Lavi finds himself becoming more and more attached to his fellow Exorcists.

Lavi's Innocence is Tettsui, or Iron Hammer. It is capable of extending and expanding to massive sizes; Lavi uses the head as a platform to travel on. Lavi can also harness elemental powers through Tettsui with various 'seals'. Unlike other Exorcists in the main cast, Lavi has yet to defeat Akuma that's above level 2. He isn't very strong fighter likely because of his need to keep distance from his Innocence, but it's been shown that he's quite competent fighter barehanded. Apparently he also knows how to use a knife. 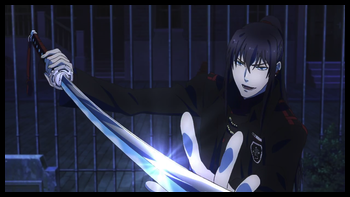 A cold and aloof swordsman from Japan. Kanda is an extremely efficient Exorcist who prefers to work alone, though he is nominally under General Tiedoll's command. He has a tattoo of a strange rune on his left pectoral that sucks his life force to heal him if he is injured.

Kanda's Innocence is Mugen, a black-bladed katana that allows him to use several 'Illusions' in combat. These range from an eight-sided slash similar to the Kuzu Ryu Sen to a second blade made of Innocence energy. Now it upgraded to the crystal-type as well.

As of chapter 217, he has accepted the position of Exorcist General. 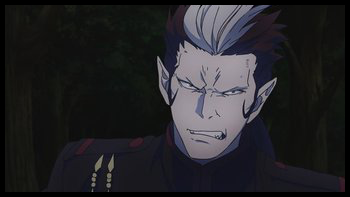 A vampire-like exorcist from Romania. After he gained his Innocence, he instinctively attacked and drained the blood of Akuma, causing the villagers to believe he was a vampire. The only person who accepted him was a girl named Eliade, who later turned out to be an Akuma. When he found out what she really was, she tried to kill him. He ended up killing her as she said she only wanted to love him, despite her Akuma nature. The reason he joined the Black Order is so that Eliade's death would have a purpose.

Krory's Innocence is his teeth. When activated, he can drink the blood of Akuma, which has no negative effects on him since a parasitic-type Innocence can break down the blood virus. Akuma blood allows him to heal quickly, and boosts his speed and strength. During the Ark arc, he gains the ability to remove the blood from his body and turn it into a living, virtually invulnerable replica of himself. 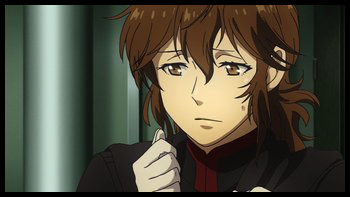 A shy, clumsy and insecure German woman who was the subject of ridicule in her hometown due to her inability to hold down a job. She has been fired from over 100 jobs, and often feels useless because of this. When her clock caused the same day to repeat over and over in her town after she connected with Innocence inside it, Allen and Lenalee helped her to revert the time flow to normal. She joined the Black Order soon afterwards, determined to be a useful exorcist.

Miranda's Innocence is the Time Record, which she can use to heal people and repair broken objects by reversing time. However, when she deactivates her power, the damage returns. Her Innocence also allows her to create a barrier of frozen time, negating attacks. 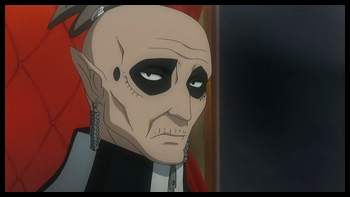 Lavi's mentor. He is a short old man whose Facial Markings made him look like a panda according to Lavi. His anti-akuma weapon is a set of needles called Heaven's Compass. 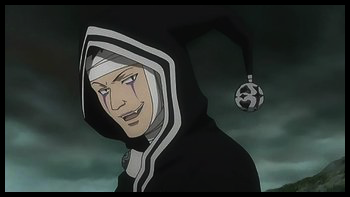 A cheerful 18-year-old exorcist from Bodrum, Turkey. His anti-akuma weapon is the Charity bell. He was one of the first exorcists to be killed by Tyki. 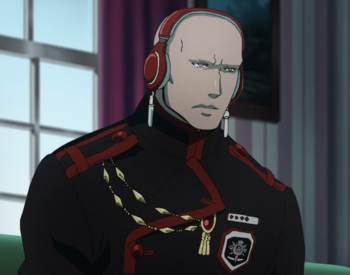 Noise Marie is a blind exorcist who has excellent hearing. His anti-akuma weapon is the Noel Organon, a bunch of strings which he can use to ensnare akuma. He also lost 2 of his fingers to a level 4 akuma's bullet. 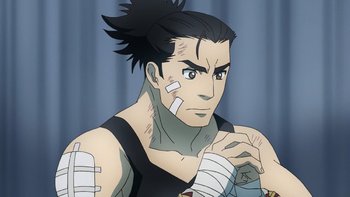 One of the surviving members of Anita's crew. While inside Noah's Ark, he manages to synchronize to one of the Innocence and ends up joining the Exorcist. His anti-akuma weapon is the Arms of Baptism. 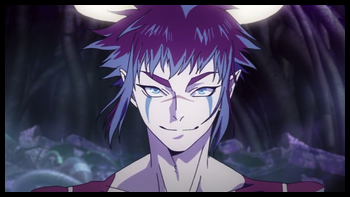 Yu Kanda's childhood friend and thus another product of the Black Order's experimental Second Exorcist program. In Kanda's flashbacks, he's shown as cheerful, a bit silly, optimistic boy who talks a lot (too much in Kanda's opinion) and who's big fan of mayonnaise. They didn't really get along at first, but after some Bloody Hilarious moments they became friends. Apparently enduring everything became little easier for them after that...up to certain point.

He doesn't appear in the anime until D.Gray-man: Hallow was confirmed in 2016. Now we get to watch him suffer in high definition. 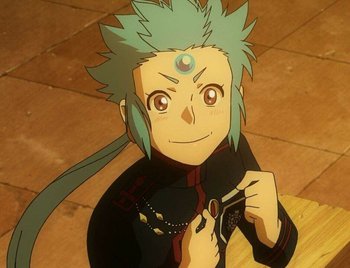 A young boy from France who was taken to a local orphanage when his thief father was arrested after making him swallow a jewel he had stolen. Shortly afterwards, the gem fused with Timothy's forehead and gave him the power to possess people. Wanting to save his orphanage from closing down he uses this newfound power to become "Phantom Thief G" and steal enough valuables to earn money and keep them afloat. His innocence is Tsukikami, which allows him to possess Akuma. This process purifies the dark matter they are created from and allows him to use whatever abilities they had for as long as he is controlling them. Upon exiting the body the Akuma crumbles to dust and is destroyed. 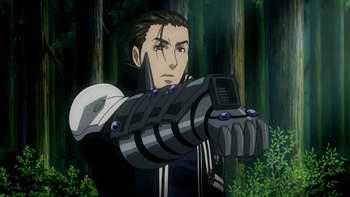 A member of Winters Socalo's team who was ambushed by Tyki Mikk in India. Seeing his comrades fall before him terrified Suman and caused him to enter into an agreement with the Noah. In exchange for the information that would later lead to the deaths of six exorcists and over a hundred finders, Suman would be spared. The innocence detected his grave betrayal and turned Suman into a Fallen One, a monstrous creature that rampages until it expires. Despite being saved by Allen and having his innocence severed from his arm, Suman died anyway after his soul was removed and his body destroyed by Tyki. His innocence was a strange gauntlet that let him control wind. 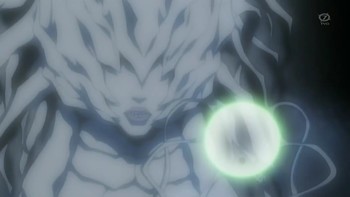 A strange parasite type exorcist who remains at the Black Order HQ and watches over the Innocence pieces that haven't found someone to synchronize with yet. Very little is known about her aside from the fact that she is very old and has been with the Order for a very long time. Her innocence is Cube, that is, the piece of innocence that held the prophecy of the end of the world. With it she has the abilities to store other innocences inside her own body and probe exorcists anti-akuma weapons to learn more about them. 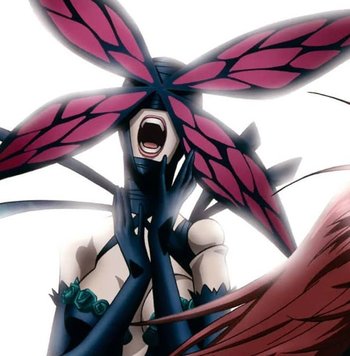 A woman with a parasite type innocence that was killed at some point in the past and is now used by General Cross thanks to some sort of necromancy spell. Not much is known about her past or what led to her death. The name of her innocence is also unknown, but is referred to as "Grave of Maria" while under the control of Cross.