"I'll be fine. It's always been like this. I'm used to being feared and hated. I'll survive."
—Legoshi to Els

The main character, a quiet and sensitive gray wolf. Because of his fearsome appearance and odd habits he is widely mistaken to be a scary, bloodthirsty carnivore. Legoshi is wholly aware of this and does everything in his power to minimize himself and downplay his intimidating aspects. The series is largely about him coming to terms with his place in the world as a wolf.

The proud face of Cherryton's drama club. He has an enormous ego, but with acting skills like his, this isn't surprising. He carries a number of personality complexes owing to his status as a deer, a species traditionally seen as carnivore fodder. While he has shown moments of genuine kindness he is also very emotionally manipulative.

Louis' greatest ambition is to achieve the rank of Beastar, a rank that he has been reaching for since his youth.

"It's easy to live in the shadows like you. But I want to live out in the light!"
— Bill to Legoshi

A member of the drama club's acting team. He is very proud of his status as a carnivore and thus acts as a foil for timid Legoshi.

A bald eagle member of the drama club. He acts as a mediator among the carnivores especially towards Bill.

A goat member of the drama club. She is Tem's secret crush and the first to see Legoshi's "real" self.

A gray wolf who joins the drama club's acting team as a first-year. She is bright and cheerful, but like many carnivores, she has internalized the hatred directed toward her kind. With her looks and glowing personality, she quickly gains the attention of Cherryton's males, but she has eyes only for Legoshi.

"Day after day, carnivores' eyes are losing their shine from being consumed by their desires and instincts... They're just not beautiful. It's a scientific fact..."

A dall sheep with a devil-may-care attitude, Pina is a new transfer into Cherryton's Drama Club. He seems to take pleasure out of teasing others, especially Legoshi, and is openly disdainful of carnivores. 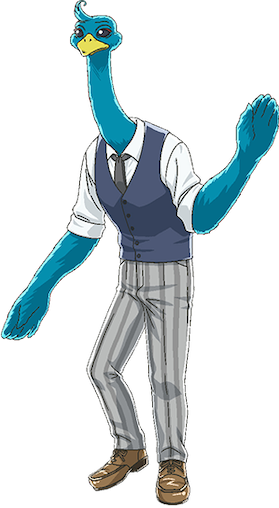 A large peafowl, and the leader of the stage crew. He heads the lighting team, the costumes team, and the props team. Acts as a mentor to some students, and is very kind.

A mongoose student of Cherryton Academy and a member of the Drama Club. Originally an actor and a runner-up for Tem the alpaca's role in Adler, he is demoted to stage crew by Louis, much to Kai's chagrin. 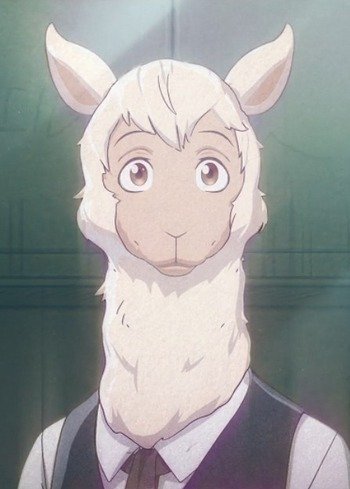 "You carnivores are all monsters!"
—Tem's last words

The alpaca student whose murder by a carnivore animal sets up most of the story.

A grey anteater on the costume team.

A black panther of the actors team. 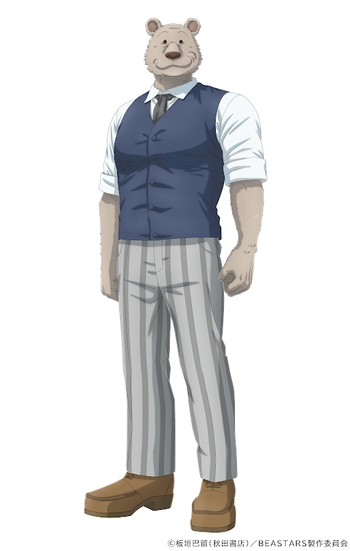 "You and I are going to have the fiercest friendship the world has ever seen."
—Riz having an inner monologue about Legoshi

A quiet and unassuming brown bear. Preferring to stay in the background, he helps the drama club in the stage crew department. Like many within the drama club, he has his own secrets to hide.

Haru is the lone member of Cherryton School's gardening club. She is earnest and forthright which, in addition to her sexual promiscuity, has earned her a sleazy reputation. Haru is broadly confident, but a defeatist side sometimes peaks through her facade.

In spite of her caring nature, she tends to keep people at an emotional distance.

Both one of Legoshi's roommates and his best friend for many years, Jack is a rather average guy. He is often weirded out by Legoshi's behavior, especially involving Haru, but he is always there for his best friend. 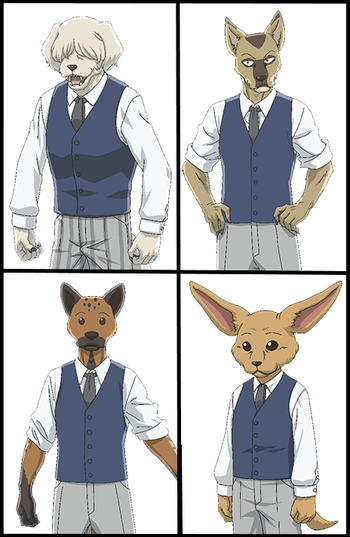 The 701 Canines. Top: Collot and Durham Bottom: Miguno and Voss

The rest of Legoshi's roommates, who became friends with him, Jack, and each other almost immediately. The group is seemingly inseparable, extremely sociable, and always willing to have each other's back in case of trouble.

The Principle of Cherryton Academy, a rather timid yet passionate Tiger. 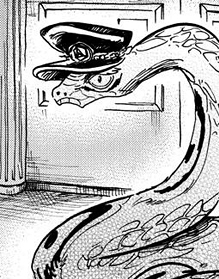 Rokume, the rattlesnake, is Cherryton's lone security guard. Her name, meaning six-eyes, refers to the eye patterns along her back. However, she is also the 'eyes' of the school. She uses her natural stealthiness to observe the school environment from the shadows.

She suffers a unique shame in being a limbless animal and holds a bit of envy for those with arms and legs. She has been watching Legoshi for some time and wants him to live up to his potential.