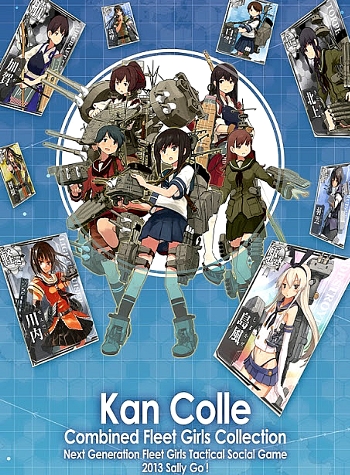 Your orders, my Admiral?note Middle (clockwise from bottom): Fubuki, Mogami, Ise, Akagi, Ooi. Cards (clockwise from bottom left): Sendai, Tone, Kaga, Chikuma, Shirayuki, Kitakami, Haguro, Shimakaze. Note: the rarities of most of the cards in the image do not correspond to their rarities in the game, and Kitakami's base form is a light cruiser.
Advertisement:

What if the most famous warships of the Imperial Japanese Navy woke up one day to find out that: A, they'd been granted sentience, and B, they'd been placed in the bodies of Japanese girls? Well, they're about to find out.

While the Kancolle does not have an official canon to tie all its plots together, the loose story revolves around monstrous alien ships called "Abyssals," which invade and take over Earth's oceans, destroying any ship or aircraft that attempts to traverse them. To defend against the Abyssals, "Ship girls" are created—essentially, fighting ships from World War II reincarnated as girls, who posses magical powers and more than enough firepower to take the fight back to the Abyssals themselves.

An arcade spinoff by SEGA's AM2 division underwent location tests in early 2015 and was released in 2016.

An anime adaptation, by Studio Diomedea, premiered in January 2015. A handheld port to the Play Station Vita, titled KanColle Kai was released on February 18, 2016, after multiple delays.

Compare to Azur Lane and Arpeggio of Blue Steel, which also features female personifications of WW2-style battleships, the latter of which is the subject of a special collaboration event between the two franchises for Winter 2013. Not to be confused with Sengoku Collection, which has genderflipped Sengoku warlords instead. For a Spear Counterpart of sorts, compare to Touken Ranbu.

Waifubot shows her customer how, yes, they ''can'' turn random items into waifus. Case in point: ships and entire planets.

Waifubot shows her customer how, yes, they ''can'' turn random items into waifus. Case in point: ships and entire planets.