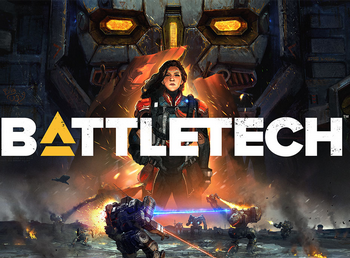 BattleTech (stylized as BATTLETECH) is a Turn-Based Tactics/Team Management Sim Mecha Game based on the classic tabletop game of the same name developed by Harebrained Schemes, a company founded by franchise co-creator Jordan Weisman, and published by Paradox Interactive. The game was funded through

in November 2018,note Introduced the Hatchetman, Cyclops, and Crab BattleMechs, and the "Flashpoint" mission type: Small mini-campaigns set on a single world with multiple missions and Consecutive Deployment, where players run several fights in sequence without a chance to repair between them Urban Warfare

in November 2019.note Included eight new BattleMechs: The Annihilator, the Archer, the Assassin, the Flea, the Rifleman, the Phoenix Hawk and the Vulcan from BattleTech canon, three of them Unseen (BattleMechs that were formerly Exiled from Continuity due to the now resolved legal dispute with Harmony Gold, the US distributor of Macross), the entirely new Bullshark, numerous new weapon types that are Lost Technology and the entirely new COIL weapon, and the Heavy Metal campaign which is playable during Campaign or Career Mode. Update 1.8, which came out at the same time, also brought two more Unseen (the Marauder and the Warhammer) to the fold The final update for Battletech, 1.9, was released in February 2020. No sequels have currently been announced.