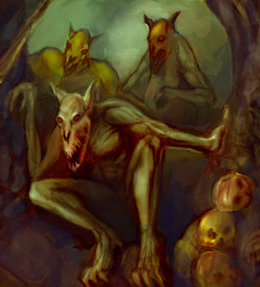 Much like trolls, ghouls are one of the least consistently portrayed creatures in fiction, partly because the phrases "ghoul" and "ghoulish" are poorly defined terms that can refer to anything or anybody interested in the macabre and morbid, giving writers the ability to name almost any cannibalistic, flesh-eating or just creepy monster after them.

In general, ghouls tend to be strongly associated with cannibalism and man-eating; they will usually be either ravenous predators of living people, corpse-eaters or both. They are often also treated as degenerate beings, created when something else — typically a living person, sometimes a stronger or more refined undead creature — somehow "decays" into a more primitive or corrupt state. The two things can sometimes be tied together, with an initial act of cannibalism being what causes a person to degenerate into a ghoul. Other times, this corruption can come in the form of an undead infection, a plague or any of a myriad other causes.

Besides being creatures associated with death, cannibalism, and degeneracy, ghouls can come in a plethora of types and subtypes. Some of the more common varieties include;

Similar to how many plots would end with, or feature prominently, a vampire/werewolf confrontation, a number of stories from various horror comics published in the '50s, '60s, and '70s depict a natural rivalry between humanoid, flesh-eating ghouls and their blood-drinking vampire competitors. As the modern pop culture perception of the "Romero zombie" became commonplace, however, such depictions quickly fell out of vogue.