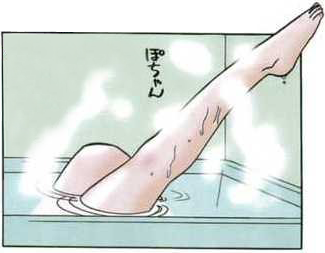 THAT'S HOT! Uh... I mean, the water. That sure looks like a hot bath. Yeah...
Advertisement:

A Bath Kick is a position a female character does when they are having a Bathtub Scene or Furo Scene, which is extending her leg to its full length. Basically, it is a form of Fanservice during bath scenes to show off her legs for the Rule of Sexy.

This is also used when a character is washing her leg in the tub. Not only has it been used as a bathing position, but it has also been used as an attack.