Albinos Are Freaks
aka: Evil Albino 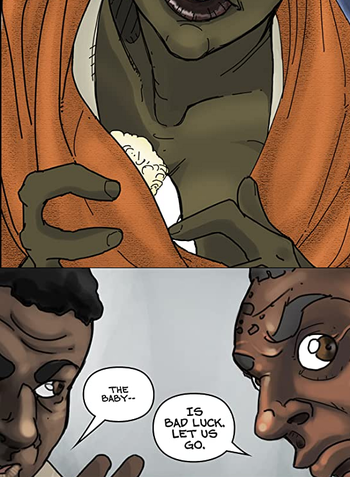 Miss Cerebus: Mr. Dragon does not like to be kept waiting.
Hemlock: The impatient albino.
Miss Cerebus: I don't think Mr. Dragon's affliction is a joking matter.
Hemlock: I thought it was rather humorous myself. A spy network run by a bloodless freak who can't stand light or cold.
— The Eiger Sanction
Advertisement:

Genetic defects are rarely ever brought up in fiction, but when they are, albinism

— or in some cases leucism

— is typically the most common. Albinism is a genetic condition that results in little or no production of melanin, the compound responsible for hair, skin, and eye colors in many species. In fiction, this usually manifests as very pale or stark white skin and hair paired with red or purple eyes. Because this phenotype is highly unusual, it is oftentimes viewed with great suspicion.

As such, most of the time these characters are social pariahs among their own people. At best, and especially if they occupy some high rank of authority, they'll be regarded with no small measure of fear by all. If not, they'll probably just be ignored or left to their own devices, which they might just prefer. At worst, though, they'll be actively shunned, exiled, abused, or subject to any other manner of horrific fate.

The exact reason for this discrimination may vary from setting to setting. In many cases, the ostracization of an albino character will be linked to the supernatural and/or magical. In fact, many fantasy and horror stories that use this trope treat a character's albinism as directly related to any magical or supernatural abilities they might possess, or as a the result of being a victim of said activities; compare Locked into Strangeness. In other works, the actual supernatural and magical aspects will be stripped down to simple myth and superstition, making the character an innocent victim of both.

Visually, albinism is very striking, and the introduction of one usually establishes that the character is of some plot importance even before they are properly introduced. Albinism, and the impact it has on others' treatment of someone with the condition, may be a source of the character's motivations.

Compare White Hair, Black Heart, Undeathly Pallor, White and Red and Eerie All Over, and Red Eyes, Take Warningnote Though in Real Life, that last one doesn't show up too often among albinistic humans except under direct bright light.; these visual associations with evil may contribute to the ostracization. Relatedly, meta-examples may play up albinistic traits as a villain's Red Right Hand; this form of the trope is common among The Morlocks, for example. In more realistic depictions of albinism, which tends to go hand in hand with vision problems and sun-sensitive skin, such a villain may also be an Evil Cripple with Four Eyes, Zero Soul. This trope also occasionally overlaps with Chocolate Baby if a dark-skinned father mistakes his kid's albinism for a sign that the mother cheated with a lighter-complexioned man.

See also Mystical White Hair for white hair being associated with special powers. If an albinistic Animal Nemesis is depicted as uniquely formidable or aggressive, expect a Moby Schtick. Contrast White Wolves Are Special, Great White Feline and White Stallion for examples of albino/leucistic animals which are portrayed postitively. Compare and contrast White Bunny, which can be played both ways.

For another disability that's often treated as an oddity, see Little People Are Surreal.

NOTE: When writing examples regarding an albino character being an outcast, remember to include that the reason (or at least major reason) is because of their albinism.