Starly was caught by Ash moments after first arriving in Sinnoh where his Aipom accidentally bumped into it during a search for their lost Pikachu, which Ash decides to use Starly to help with the search. He later evolves into Staravia during a battle with Team Rocket, and then into Staraptor in order to win a PokéRinger competition.

Staraptor stayed on Ash's team throughout the Sinnoh journey, and remained one of Ash's top fighters. His defining characteristic is that Staraptor will perform a face-fault whenever he's shocked or confused by something.

Voiced in Japanese by: Shin-ichiro Miki
Voiced in English by: Billy Beach 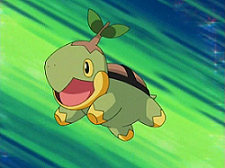 Turtwig was met by Ash and company along the way to Jubilife City where it served as a forest protector for the Pokémon around Clara's home, going so far as to protect Pikachu from Team Rocket and Ash believing them both to be enemies. Turtwig soon realizes his mistake and apologizes, but also begins to bond with Ash after the two deal with Team Rocket. It then challenges Ash and Pikachu to a battle, which results in Turtwig's capture.

Along the Sinnoh journey, Turtwig evolves into Grotle during a battle with Paul, and then into Torterra during a battle against Team Rocket. Sadly, Torterra has become well-known amongst the fandom as the Pokémon amongst Ash's team that couldn't win any of its important battles after evolving. 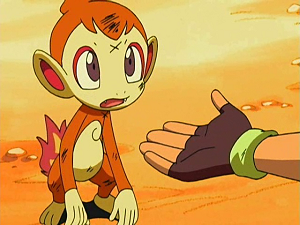 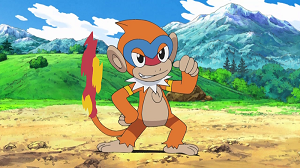 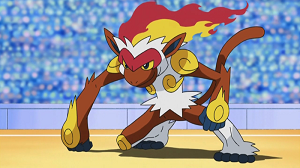 Chimchar started off under the ownership of Paul, who captured it after being impressed by the power displayed by Chimchar's Blaze ability against a herd of Zangoose. Paul would attempt to train and battle alongside Chimchar ever since, but was constantly left disappointed being unable to bring out the power of Chimchar's Blaze again, no matter how harshly he trains it. Finally deciding that he's had enough with Chimchar's incompetence, Paul decides to release Chimchar during the Hearthome Tag Team Tournament. However, Ash invites Chimchar to his team just moments after given their previous interactions throughout the former's Sinnoh journey, which Chimchar accepts.

After becoming a member of a new team, Chimchar would go on to becoming Ash's Sinnoh ace winning a vast amount of battles throughout the journey. It would eventually evolve into Monferno after defeating Paul's Ursaring during a battle against his former trainer, and then into Infernape during a battle against Team Rocket. Infernape eventually learns how to control Blaze under Ash's tutelage, and manages to be the one that scores the overall victory for Ash against Paul during the Sinnoh league. 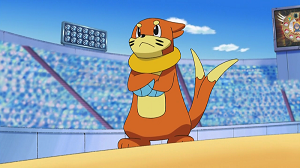 Buizel lived in a river along the path to Eterna City where he made a name for himself as a powerful opponent for trainers. After hearing about the rumors surrounding Buizel, Ash and company decide to fish in the river for a chance to battle against him, which eventually results in Dawn capturing Buizel. Afterwards, Dawn has some struggles bonding with Buizel due to not being used to having a battle-hungry Pokémon that doesn't have much interest in Contests, but eventually settle their differences.

Further down the line, Zoey notices how in addition to Buizel wanting to take part in Ash's gym-style battles, Ash's Aipom appears to be more interested in Dawn's Contests. She suggests for the two of them to make a trade so that Buizel and Aipom can pursue what they desire, which Ash and Dawn accept. Now under Ash's ownership, Buizel takes part in Ash's gym challenge throughout Sinnoh, becoming one of his most effective battlers. 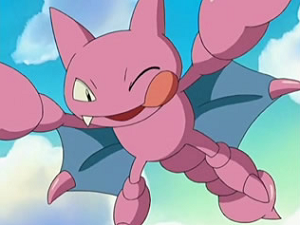 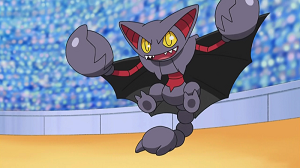 Gligar started off as part of a huge Gligar swarm headed by a Gliscor that were all causing mischief in a town they were trapped in along the path to Veilstone City. Ash and company arrive passing through to reach Veilstone, but decide to help solve the issue by pulling off a plan to blow the swarm out of the town. However, they only managed to pull this off thanks to one of the slower Gligar managing to gather the others all into one place after Paul caught the Gliscor, which left the swarm in disarray and leaderless. The slow Gligar decided to stay behind wanting to continue travelling with Ash, resulting in its capture.

After joining Ash's team, Gligar proves himself to be a silly comic-relief type of the group, but doesn't get to do much early on. After being handed a Razor Fang from Gary, Gligar evolves into Gliscor soon after in order to support Ash in a battle against Team Rocket. As a Gliscor, it keeps the silly persona that it had as a Gligar, but becomes a worthy contributor to Ash's Sinnoh team. Eventually, Ash decides to leave Gliscor in the care of an Air Battle Master named McCann so that it can receive further training as a master of the air, but later gets to return to Ash for the Sinnoh League. After Sinnoh, Gliscor remains at Oak's lab instead of returning to McCann.

Voiced in Japanese by: Daisuke Sakaguchi
Voiced in English by: Tom Wayland 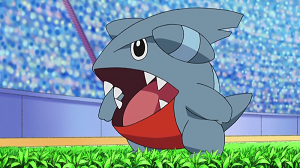 Gible took the sixth slot on Ash's Sinnoh Team after Gliscor was left with Mccann to help it master Giga Impact. Ash and company came across the oblivious Gible along the way to Daybreak Town where they come across the move tutor, Wilma, teaching Gible how to use Draco Meteor. The gang decides to try to help the Gible learn the move, which results in Gible forming a bond with them, and follows after the gang when they decide to continue on their journey, eventually leading up to Ash capturing him.

Under Ash's ownership, Gible spent the rest of the journey continuing to learn Draco Meteor under his trainer's tutelage, and gets to participate in the Sinnoh League. Gible had also quite a long-lasting running gag where his failed Draco Meteors always somehow come down crashing upon Dawn's Piplup.