Characters Page | The Eight Protagonists | Supporting Characters | Antagonists | Other characters
open/close all folders
In General
Where will their journey take them? Only the gods can say.
Advertisement:
Ophilia Clement 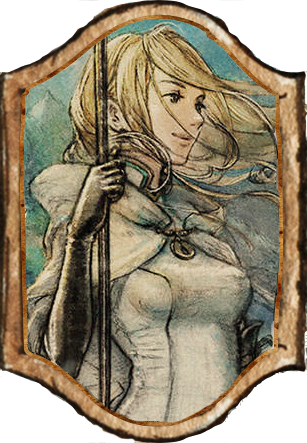 "The Flame guides us true."
Her name is Ophilia, and she is a cleric.
A cleric from the Order of the Sacred Flame in the Frostlands region. She is on a pilgrimage called the Kindling to restore light to the realm.

Her Noble Path Action is "Guide", which makes an NPC follow her, and her Talent is "Summon", which allows her to summon the NPC she is guiding into battle. "Guide" is restricted by Ophilia's level and the Inquiry perk "Guide with Ease". 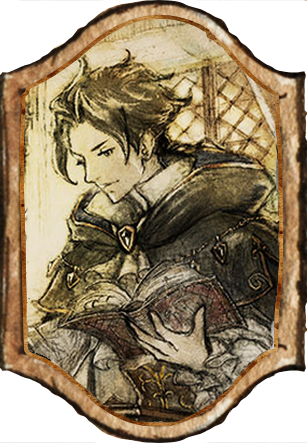 "Thus ends your lesson."
His name is Cyrus, and he is a scholar.
A scholar and professor hailing from the Flatland region who is searching for a lost tome that might contain ancient mysteries.

His Rogue Path Action is "Scrutinize", which allows him to gather information on NPCs and his Talent is "Study Foe", which reveals one unknown weakness of every enemy at the start of combat. Cyrus' level improves the probability of him being able to "Scrutinize" his subject without backlash. 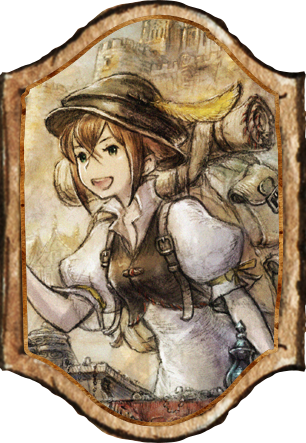 "You got more than you bargained for!"
Her name is Tressa, and she is a merchant.
A young merchant from the Coastland region who wants to see the world.

Her Noble Path Action is "Purchase", which allows her to purchase items from NPCs, and her Talent is "Eye for Money", which gives Tressa additional money whenever she explores a new area. While Tressa can buy a number of items, she must pay out of her own pocket for them, and some items simply are not for sale. The Perk "Smarter Bartering" improves the odds of Tressa getting a discount when purchasing something. 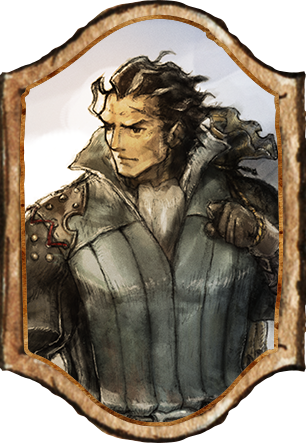 "Ah, the thrill of the fight!"
His name is Olberic, and he is a warrior.
Formerly one of the two greatest Knights of Hornburg, Olberic became the master-at-arms of a small village after the death of his king at the hands of his best friend, Erhardt. Tortured by self-doubt, Olberic sets off on a journey to discover the reasons for Erhardt's betrayal and try to rediscover his purpose in life. He resides in the Highland region.

His Noble Path Action is "Challenge", which allows him to challenge an NPC to one-on-one combat, and his Talent is "Bolster Defense", which increases his physical defense when he spends BP. Some opponents cannot be "Challenged" without an adequate level; a perk "Challenge with Ease" allows Olberic to "Challenge" his foes more easily. 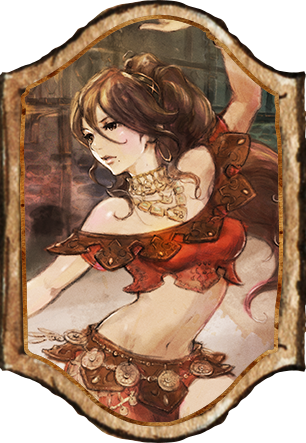 "The show is over."
Her name is Primrose, and she is a dancer.
Once the highborn daughter of a noble house, Primrose lost everything after her father was killed by three men who each had a crow tattoo. Her search for revenge has led her to become a dancer at a Sunland tavern one of the men is said to visit.

Her Rogue Path Action is "Allure" and her Talent is "Summon". Both of these work similarly to Ophilia's "Guide" and "Summon" actions. Prim's level and the Inquiry perk "Undeniable Allure" make it easier to Allure various individuals. 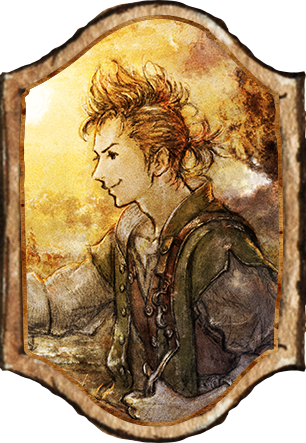 "That's what I'm talking about!"
His name is Alfyn, and he is an apothecary.
An apothecary from the Riverland region on a journey to heal the sick and wounded.

His Noble Path Action is "Inquire", which works the same as Cyrus' "Scrutinize" and lets him extract information from NPCs, and his Talent is "Concoct", which allows him to brew potions in battle. Alfyn will always get info out of people he "Inquires", provided he is at a level at which they will listen. 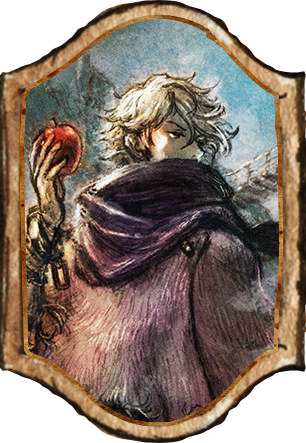 "Don't start things you can't finish."
His name is Therion, and he is a thief.
A young thief from the Cliftland region commissioned by a mysterious client to steal rare gemstones known as the Dragonstones.

His Rogue Path Action is "Steal", which lets him take items from NPCs, and his Talent is "Pick Lock", which allows him to open chests that are normally inaccessible to the other characters. The Inquiry perk "Thieving Tips & Tricks" allows Therion to more easily "Steal" from his marks, along with a higher level. 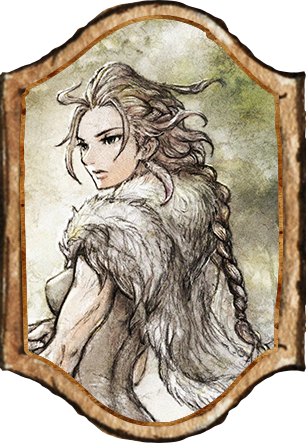 "I honour thee, my quarry."

Linde
Her name is H'aanit, and she is a huntress.
A huntress from the Woodland region on a quest to find her master, who disappeared while pursuing a dreadful fiend called Redeye.