Characters from the mind-screw of a game that is Ghost Trick. Note that the very existence of certain characters is itself a spoiler, so tread lightly.

The Mystery
Click here to see his real body.

The protagonist, narrator, and first player character. He wakes up dead and wants to figure out who he is, but all he has is his corpse (which he cannot interact with), a mentor named Ray, and the time until sunrise, when his soul will cease to exist.

A rookie detective, and the first person you save. Apparently she's the key to figuring out who you really are... but if she told you straight off, what fun would that be? 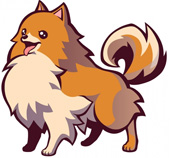 Kamila's loyal but excitable Pomeranian. Becomes a valuable assistant after he dies (again) and acquires the power to swap similarly shaped objects.

A young girl who lives with Lynne. Also Jowd's daughter. She accidentally killed her mother with a Rube Goldberg birthday contraption that Yomiel manipulated to fire a gun. 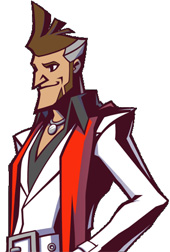 A flamboyant detective who dances wherever he goes. He's an ambitious ladder-climber and wears a white coat to illustrate his spotless record. Secretly working to find evidence of a "manipulator" possessing other people and to clear Detective Jowd's name.

The junkyard superintendent. Has a pigeon which sits constantly on his head. He was the medical examiner who discovered that Yomiel's body remained suspended at the moment of his death. After Yomiel possessed his own body and walked off with it, the coroner quit his job to discover the truth about the mysterious corpse.

Fated Jailbird
A bearded prisoner at the Special Prison who paints faces to remember them. Despite his circumstances, he's relatively jovial and accommodating. Formerly a detective. He hunted down and nearly shot Yomiel after his escape. Five years ago, he took the fall for his wife's murder to protect Kamila, though by now he almost believes he did it himself.
Justice Minister 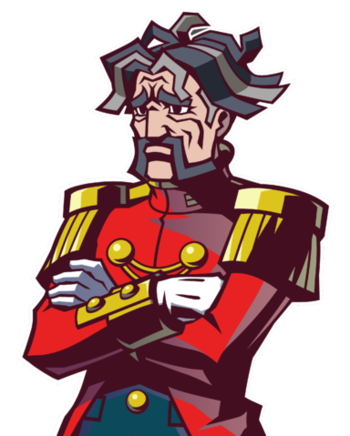 Careworn Gentleman
An old, neurotic wreck of a man. His wife took his daughter Amelie and left him after he signed an order to execute Detective Jowd. He only signed it due to Yomiel's manipulation, but is too scared to tell anyone about it. 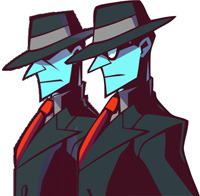 Hunter in the Dark (Jeego) and The Other Hitman (Tengo)
A pair of blue-skinned assassins sent to kill Lynne. Jeego's perfect shot range grows shorter every year, while Tengo is always one step ahead of both his target and his boss.
Commander Sith

Eyebrowed Villain
A short but apparently wealthy blue gentleman. His motivations are unknown but he seems to have ill intent towards Lynne and a deep interest in Sissel. It's revealed later on that he is actually interested in Yomiel, who takes the name Sissel and who looks like Sissel's perception of himself, and he wants to take the Temsik fragment for the government that he works for.
Beauty and Dandy 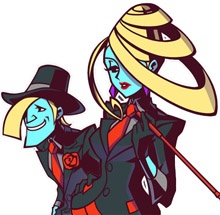 Black-Hearted Blue Woman (and Man)
A black-hearted, blue-skinned pair, most likely from the same country as Commander Sith and the assassins. Beauty is a standoffish Ice Queen who can sense the presence of ghosts, while Dandy is a gentleman and only slightly kinder than his cohort. Dandy has a major crush on Beauty, despite her constant verbal abuse. They kidnap Kamila, assuming she's Amelie, in order to force the justice minister to carry through with the execution order.

A large, passionate woman who lives next door to Lynne and Kamila. She writes torrid romance novels. The separated wife of the justice minister, whom she left after he issued Jowd's death order. 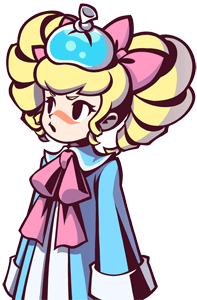 Feverish Firecracker
Emma's daughter, who is bedridden with a fever. She hates her mother because Emma refuses to let her talk to her father.
B Lue-Suited Prison Guards

A pair of bored prison guards at the Special Prison. One is named Bailey and is mildly neurotic. When trouble hits, he does "The Panic Dance", which was apparently handed down in his family for generations. The other is never given a name and generally plays the straight man to his partner's shenanigans. He likes to build card towers.
Rockin' Jailbird

A rock star inmate at the special prison, who sung national secrets during a worldwide broadcast. Yomiel controlled him into doing so, to show off his powers to the foreign government.
Sausage Head

An oval-headed inmate at the special prison who took the police commissioner hostage, with his only request being for curry. Yomiel again. Does not seem very bright.
Guardian of the Park

Guardian of the Park

A round-haired man who has made it his mission to defend Temsik Park and the "rock of the gods" ( the Temsik meteorite) from housing developers. This involves mostly dancing around barefoot and distributing leaflets. Not an undercover agent.

Jowd's wife and Kamila's mother. Yomiel murdered her using Kamila's birthday contraption. The removal of Yomiel's death from the timeline also removes her death, and she is seen at the end of the game serving dinner to her friends and family.

A chef with a chicken-shaped nose who works at (and possibly manages) the Chicken Kitchen. He enjoys singing. 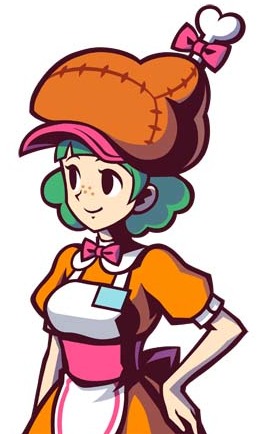 An "odd girl" who works at the Chicken Kitchen. She's not very attentive to her job. There's a good reason for that, though, as The Reveal shows. 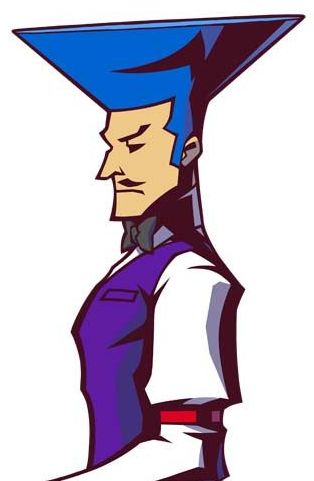 A calm bartender in the bar of second floor of the chicken kitchen.

Ray of Light
A possessed desk lamp who teaches Sissel the ropes of the spirit world. He seems to know more than he's letting on, though. He's Missile from an alternate timeline where Sissel didn't stick around to help Lynne and none of Yomiel's plans were stopped. Missile went back to the day of Yomiel's death (as Sissel would later do) and then waited ten years for the day of Sissel's death to come around again so he could manipulate him into helping Lynne.
The Manipulator

The mysterious Big Bad of the game (well, one of them). Became immortal after being struck by a shard of the Temsik meteorite. He was the one who took Lynne hostage in the park, and who orchestrated the events leading to Kamila's mother's death, Jowd's imprisonment, Lynne's murder accusation, and (accidentally) Sissel's death. Years of being separated from the rest of humanity, as well as his own undead status and his fiancée's suicide, drove him to seek revenge on the people who put him in that position. He has the power to control other living things, as well as manipulate inanimate objects like Sissel. At the end of the game, Sissel turns back time to save him from the meteorite, and Yomiel's ghost controls the body of Yomiel in the past to save Lynne from being crushed, redeeming himself just as he's given a second chance at life.
Super Spoiler Character

Sissel's namesake. Yomiel gave him the name after finding that she'd committed suicide, assuming Yomiel to be dead. This was part of what drove him first to despair and then to revenge. She's the only character in the game who we never directly see, but she apparently waits ten years in the new timeline for Yomiel to get out of jail.