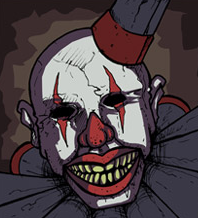 Clowns are supposed to be funny. They're supposed to make everyone laugh, especially children. This is the entire point of their existence. A truly good clown is supposed to be a Friend to All Children. Sometimes they succeed. But for some people, clowns awaken some primal fear.

There are children who won't go near a clown without shaking, freezing up or even screaming.

Their face is... fake, corpse-like, most often the makeup they use does NOT help, the emotions aren't real, the smile is just painted on. The outfit and big shoes are downright grotesque. There's something seriously wrong with a clown to some people, and this resonates deep within the part of us that still believes that there is a monster in the closet, that will get out if you don't keep the door closed.

It's startlingly uncommon to find clown characters who are genuinely good. More commonly, writers tap into the fear: the Monster Clown is a classic villain. Expect the Monster Clown to parody humor, with classic jokes becoming deadly; acid in the plastic flowers pinned to their lapels and joy buzzers with fatal amounts of voltage, among other things. If they work in a circus, it'll be a Circus of Fear. Likewise, also expect them to crack dark jokes while killing them and laugh maniacally. Sometimes, a Monster Clown just LOOKS like a clown, and doesn't do what clowns normally do, like tell jokes or work in a circus or go to kids' parties. If there is a clown in a work that just looks like one, it's almost guaranteed that it is a Monster Clown. Because, you know, you just don't go about dressing like a clown without doing anything clowny.

Sooner or later, our heroes will have to put these clowns to the sword. And sometimes not even that stops them. Also take note that many of these clowns may or may not be completely insane and also commit their horrific crimes laughing crazily and frequently, and often with a very high-pitched voice while acting in a very similar manner to an overgrown child.

Sympathetic clowns are generally a little more muted in appearance and behavior, whether or not this is faithful to the job (in which case, see Sad Clown). Generally, audiences are more receptive to clowns who act more like ordinary people, and have less extravagant makeup. Surly clowns who tiredly work with ungrateful children are more common, probably because they speak to the average overworked audience; they may be an example of Hates the Job, Loves the Limelight.

Enemy Mime is a sub-trope of Monster Clown. A villainous clown that is Played for Laughs instead of fear is a Villainous Harlequin. The Depraved Kids' Show Host and Creepy Mascot Suit seems to be related. May be combined with Scary Jack-in-the-Box, Creepy Doll, Perverse Puppet, Evil Puppeteer, or Robot Clown. Clowns' ghastly white makeup puts them into White Mask of Doom territory. The Monster Clown is often Affably Evil or (far more likely) Faux Affably Evil. The Monster Clown is often seen with a Balloon of Doom. Compare Repulsive Ringmaster. For examples based on the Joker from Batman, see Practically Joker.

The opposite of this trope is the (perhaps sadly) rarely seen any more Non-Ironic Clown.