Yeah, there's a whole slew of them. LET'S GET THEM ALL! 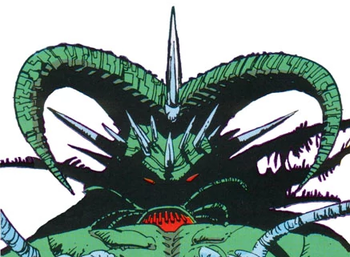 "Evil is infinite."
One of the Thirteen Original Transformers, created as a force of evil to keep the balance with his good counterpart, Prima. He's implied to be the founder of the Decepticons, and he left Cybertron with several followers to create a Cybertronian Empire that Terraforms conquered planets. 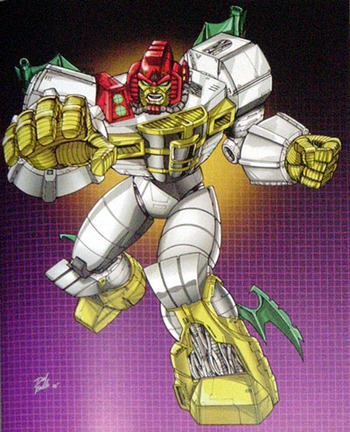 The Liege Centuro (general) of the Liege Maximo's Cybertronian Empire in the G2 comics. Alternatively, Jhiaxus was a crew member on the Ark-1 and serves as Nova Prime's pet mad scientist; his obsession with forcing Cybertronian evolution has led him to introduce gender programming to the Transformer race, modify his own body into a form resembling that of Bayformer Starscream, and the creation of both gestalt and Micromaster technology. 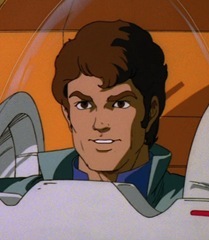 Father of Spike and Buster.

Spike's younger brother, and the Autobots' friend in the Marvel Comics. 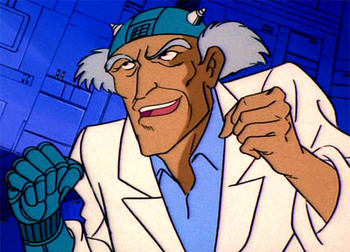 A Mad Scientist ally of Megatron who specializes in mind-control in the Season 1 Three-Parter The Ultimate Doom, in a bid to become the ruler of Earth once Megatron has harvested all its energy.

Buster's girlfriend in the Marvel comics

The Autobots' main contact/ally in the Earth Defense Command. Daughter of Flint and Lady Jaye. In her younger years, she was ironically a vigilante opposing the EDC (at the time, the EDC was anti-Transformer), and was a Kiss Player, a girl with the ability to kiss a Transformer to Fusion Dance with it and dramatically boost its powers and share her knowledge and skills.

Josie was a brilliant scientist who was crippled in an attack by the Decepticon Shockwave. Vowing revenge, but transferring her hatred to all Transformers, she designed a cybernetic suit that allows her to walk again, fly, and channel electricity. Only appears in the comics.

When her parents were killed in a Transformer-related accident, she was left despondent, resentful of the giant robots, and wishing to die. But when she was discovered to be a Kiss Player, perhaps the most powerful Kiss Player in existence, she was forcibly drafted into the Earth Defense Command, partnered with a man-made Transformer called Autorooper Ne-04, and ordered to help defend the world against the threat of Legion, an army of monstrous creatures formed from Galvatron.

Marissa Faireborn's childhood friend, who became a Kiss Player and enlisted in Earth Defense Command to fight Legion. She was Autorooper Ne-04's original partner, but went missing for a while and resurfaced with Hot Rod as her partner.

A Kiss Player partnered with the man-made Transformer Autorooper Ne-01 who happily enlisted in the EDC for the opportunity to fight and slaughter. When Atari Hitotonari was forced to join, Ringo stalked, sexually harassed, and abused her. Atari was too frightened and unassertive to resist, essentially making her Ringo's sex slave behind closed doors. When Atari tried to report her, she was ignored. When Ringo made the mistake of callously gunning down one of Atari's friends right in front of her, Atari finally snapped and tore her limb-from-limb.

The self-professed Supreme Military Commander, President-for-Life, and King of Kings of the Socialist Democratic Federated Republic of Carbombya. A corrupt and greedy leader who is often willing to make deals with the Decepticons to further his goals. The creation of this incredibly offensive Middle-Eastern stereotype caused Casey Kasem (who is of Lebanese descent) to quit the show in disgust.

The CEO of Blackrock Industries.
Other 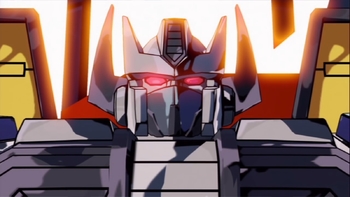 "A warrior finds honor only in the total destruction of his enemies."
A Matrix-bearer and leader of the Cybertronian people from millions of years before the time of Optimus Prime, Nova Prime ruled in a time when the Cybertronian race was enjoying a golden age of prosperity and power. Seeing his species as the greatest form of life in the universe and thus deserving of its rulership, the expansionist Nova gathered a crew of loyal and likeminded Transformers to crew a vast spaceship known as the Ark-1; ostensibly theirs was a mission of exploration and mapping the galaxy, but in reality their goal was one of conquest. Fortunately for most other forms of life, the Ark-1 and its crew vanished into the Benzuli Expanse shortly into its maiden voyage and was presumed destroyed with all hands. This turned out not to be the case, however; instead of destroying them, the Benzuli Expanse flung Nova Prime and his crew into the Dead Universe, its fell energies transforming them until they were neither living nor dead. Now, millions of years later, Nemesis Prime, still holding to his expansionist ideals, intends to merge the Dead Universe with our own in order to create a reality where Cybertronian life reigns supreme, but how much of this is his own plan and how much of it comes from the creeping, malevolent sentience which sustains him cannot be determined... 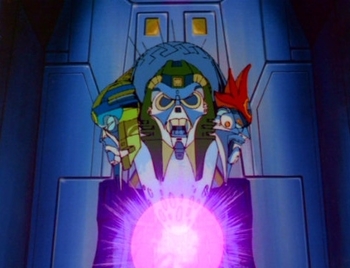 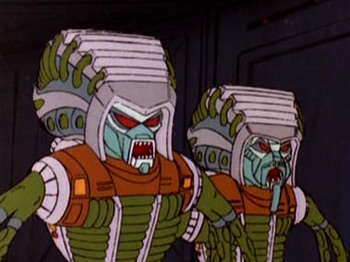 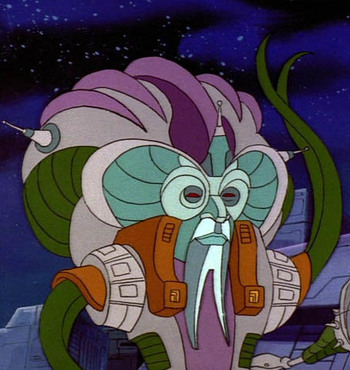 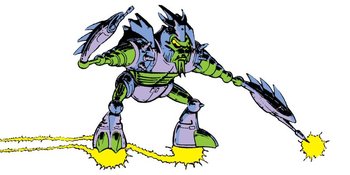 "Everyone is guilty until proven innocent, and even then they are guilty."

A hostile race of mechanical, squid-like beings with up to five faces on their bodies.

A ravenously hungry horde of transforming robots who turn into sharks, the Sharkticons serve as the Quintessonian muscle and their main method of execution. They're also not very bright, and could easily be turned against their masters if given half a chance. The Allicons, who transform into monstrous crocodilians, are a stronger, somewhat smarter breed that the Quintessons reserve for more important tasks. 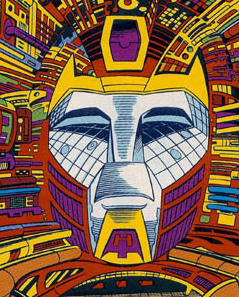 The Lord of Light and counterpart of Unicron, Primus is the Creator God of the Transformers. The spark of each Transformer is a piece of his lifeforce, and combined, they form his essence, the Allspark. He created the Thirteen original Transformers to man his body in planet mode, but when The Fallen betrayed him, Primus was forced to go into stasis, in an effort to prevent Unicron from finding Cybertron and devouring it, which would destroy that universe. Like his brother and his creations, Primus is a multiversal singularity, meaning there is only one version of Primus in the vast multiverse. 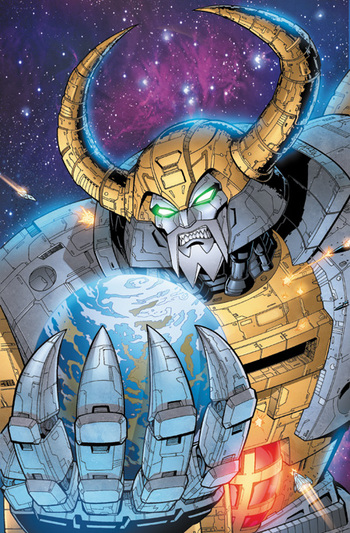 "That which does not become a part of me, shall become one with the void."

The primordial personification of Chaos and Darkness, Unicron is the ultimate force of evil in Transformers—not simply in Generation 1, but in all iterations of the brand. Like his brother and archenemy Primus, Unicron is a multiversal singularity—in all the myriad realities of the transformers universe, there is only one Unicron.note This may not apply to the Transformers Aligned Universe. The Chaosbringer has seen our existence, our reality, and he has taken offense; Unicron's greatest desire is to consume and annihilate all of creation, all possible realms of existence, until naught remains but an infinite void of absolute nothingness, at the center of which he shall sleep forever more, his tasks complete. You cannot destroy Unicron permanently; blow up his physical body, and he simply reforms in another part of the multiverse to continue his never-ending quest to devour all reality.

"My hand in the darkness drives the engines of fate."

One of the Thirteen Original Transformers created at the dawn of time by Primus to crew his planetary shell, the being once known as Megatronus Prime served as the guardian of entropy, overseeing the orderly dissolution of all things in preparation for the next creation. Destruction came to fascinate him too much, however, and as he forgot his original purpose he gave himself to Unicron, turning on his former master and his brethren amongst the Thirteen. The Fallen, as he is now known, is a cosmic force of evil, his physical form little more than a cage for the raging inferno of chaotic power which constitutes his essence; he can only be defeated, never destroyed. Like Primus, Unicron, and the other members of the Thirteen, The Fallen is a multiversal singularity—as such, The Fallen of Dreamwave Comics and The Fallen from the Michael Bay movies are the same character (or was, until the concept was done away with).

Another being created by the Mad Scientist Primacron, technically making him Unicron's little brother. A being of pure energy that exists to consume the energy of the universe. Was eventually destroyed by Grimlock applying Reverse Polarity to make him dissipate.