Millennium in Hellsing refers to three things: A plan set in motion by Adolf Hitler to create an army of vampire Nazi soldiers to bring about his Thousand Year Empire; the organization in charge of realizing this dream, and after their initial defeat (by Alucard's and Walter's hands), the operation to safely evacuate key members of Millennium to South America. Hitler's dream is long dead, but the operation still lives on within the deviously capable hands of The Major — a crazy little man hell bent on starting another war just because he really likes war.

Go back to the main page here.

open/close all folders
The Major 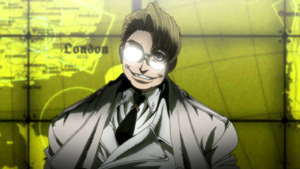 Voiced by: Nobuo Tobita (JP), Gildart Jackson (EN)
"Gentlemen, all I ask for is war. War so grand as to make Hell itself tremble. Gentlemen, I ask you as fellow brothers in arms what is it that you really want? Do you wish for further war as I do? Do you wish for a merciless, bloody war? A war whose fury is built with iron﻿ and lightning and fire? Do you ask for war to sweep in like a tempest leaving not even ravens to scavenge from this Earth!?"

The commanding officer of Millennium, a unit of Nazi vampires hellbent on destroying London as a revenge for the Third Reich's defeat. He is a short, fat, Aryan Nazi, who was given orders from the Führer himself to create a mighty army of super vampires. He created at least 1000 vampires before Nazi Germany's defeat but the Major took the Führer's order at heart and spent the last 50 years on planning to restart World War II. 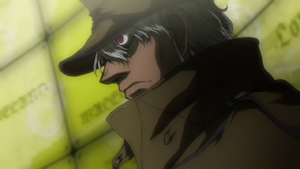 Voiced by: Nonenote Patrick Seitz provided the growls for his werewolf form in the dub.

The Dragon to the Major's Big Bad. He is a seemingly-immortal werewolf, always seen in his full uniform with the collar turned up. Like Alucard and Anderson, the Captain is his organization's supernatural trump card, boasting great strength, speed, and abilities in all three of his forms. 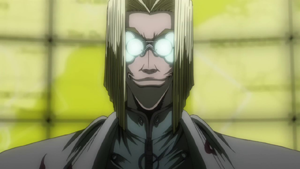 Voiced by: Hiroshi Naka (JP), Marcelo Tubert (EN)
"It is simply magnificent! I MUST HAVE ONE!"

The chief scientist of Millennium. He is the one responsible for the creation of the artificial vampires, made possible by his work involving "Shi" (Mina Harker's remains). He is always seen with a blood-stained lab coat, glasses with multiple lens, and often a remote with many buttons whose functions range from incinerating subordinates to destroying Jackal. Ironically, he's arguably the sanest of the Millennium bunch. He frequently scolds Warrant Officer Schrödinger. While not technically The Dragon, he has been with the Major as long as the Captain has (or even longer) and he is often at the Major's side so he could be considered a different right-hand man to the Major. 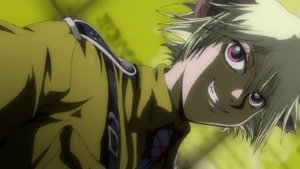 Voiced by: Ryoko Shiraishi (JP), Laura Bailey (EN)
"You're so slow! In the time it took you to walk down one little hallway, I went all the way to London, got my head blown off, and made it back. Perhaps you should start thinking about going on a diet, mein Major."

The blond, sassy Cat Boy who's "everywhere and nowhere". Although he looks like comic relief, he's not to be brushed off; due to his powers, he's physically (mathematically) impossible to kill or destroy.

Millenium Vampires in General
A top secret project that was started by Adolf Hitler during World War II and was headed by the Major. The purpose of the project was to create artificial vampires to act as elite troops to secure Germany's victory in the war. While the project was dealt a devastating blow by Alucard and Walter, the Major and his men were able to escape and continue their research into modern day, untill they were ready to unleash their lab made vampires onto the world.
First Lieutenant Zorin Blitz 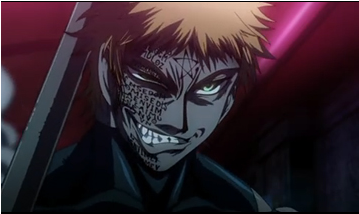 As part of Operation Seelowe 2, she is tasked with attacking Hellsing Manor, laying siege to it with Seras and the Wild Geese inside. As a vampire, she is enthusiastic about killing humans, frequently calling them "insects". Zorin makes use of her ability to torture her opponents, physically and mentally. She has an intense fixation on Seras for some reason. 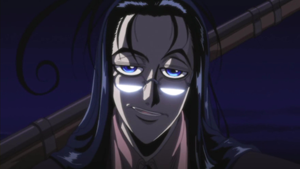 Millennium's magical sharpshooter and Perky Female Minion, seen singing opera in her first appearance. She compares herself to Kaspar, the antagonist of the German opera Der Freischuetz; appropriately, her Weapon of Choice is a musket with magic bullets. 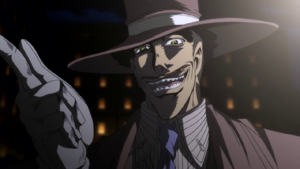 Voiced by: Hōchū Ōtsuka (JP), Steve Wilcox (EN)
"Alucard, the great vampire. You are such a disappointment!"

The second Millennium agent to confront Hellsing. He is modeled after Brazilian malandro characters and his powers are very similar to various DC and Marvel characters. 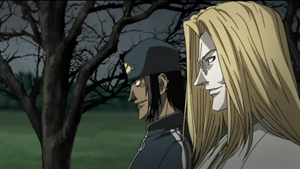 Voiced by: Takehito Koyasu (Luke, JP) and Wataru Takagi (Jan, JP), Patrick Seitz (Luke, EN) and Josh Philips (Jan, EN), Rubén Leon (Jan, spanish, first series)
"We highly recommend pissing yourselves, followed by a course of praying to your impotent god. But hey, you can always be a man and kill yourself! Thank you London, we love you! GOOD NIGHT!"

Jan and Luke Valentine are the first of the Millennium forces sent specifically to attack Hellsing. Appearance-wise, Luke is a sophisticated pretty boy. He is the "brains" of the operation and he believes that he can surpass Alucard. His vampiric power manifests as regeneration and super-speed. While Jan doesn't seem to have any specialized powers, he's more than happy to casually slaughter ordinary humans. Covered in piercings, he is the more vulgar and depraved of the brothers. Despite their status as some of the weaker of Millennium's agents, they manage to inflict significant casualties on Hellsing's human personnel. 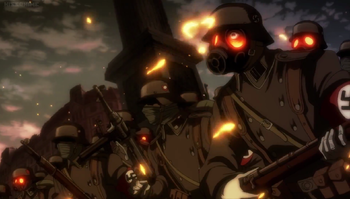 The army of 1000 artificially created vampires from Nazi Veterans.