The Hellsing Organization, formally known as the Royal Order of Protestant Knights, was an organization founded by Dr. Abraham Van Helsing shortly after defeating Count Dracula in order to combat the increasing vampire threat against the country, monarchy, and church. Unlike the Vatican, the Hellsing Organization uses any means necessary to combat evil and Satanic threats — often employing those very threats to do so, such as Alucard and Seras. 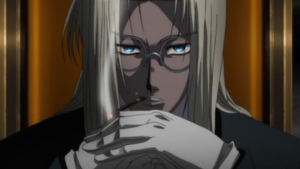 Voiced by: Yoshiko Sakakibara (adult) / Kaori Mizuhashi (young) (JP), Victoria Harwood (adult) / Tricia Dickson (young) (EN)
"Don't you dare question my resolve! I have already given you your marching orders, soldier! You will search and destroy! SEARCH AND DESTROY! Any resistance you encounter is to be CRUSHED! Hellsing does not run from our enemies! KILL THEM ALL! I order you to leave nothing but bloody stains in your way!"

The head of the Hellsing Organization and the last descendant of said bloodline; one of the knights of the Round Table also known as the Twelve Conventions that control the 'British Empire' in the shadows and protect the Anglican faith and the Crown. It is unknown how she lost her mother, but her father died when she was about twelve years of age. As her father lay on his deathbed, he told Integra that if she ever was caught in a bad situation and had no one else to turn to, she should head for the cells deep below the manor, where the family's "darkest legacy" was kept, to claim it as her greatest weapon and the "instrument of her salvation". She awakens Alucard with her blood when she was cornered by her evil uncle Richard Helsing, but Alucard saves her life and swears his loyalty to her. Shortly after this, Integra kills Richard Helsing and is knighted days later. She's twenty-two years old during the course of the story. 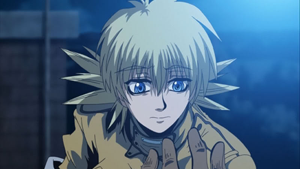 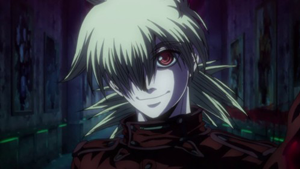 Voiced by: Fumiko Orikasa (JP), K.T. Gray, Karen Strassman (Young) (EN)
"I did everything you told me... In return you're going to help me... Help me send these Nazis back to Hell!"

A cute young police officer who was caught in the wrong place at the wrong time. She was sent to investigate the mysterious disappearances in the small village of Cheddar. However, things are much worse as she finds out — a vampire masquerading as a priest had taken over the village and killed all the villagers, most of them now turned into slavering, mindless ghouls (zombies). Despite being severely outmatched, Seras refuses to back down and fights as best as she could. She was finally captured and held hostage by the vampire priest, who threatened to rape and kill her. Alucard destroys the vampire, shooting Seras through the lung in the process. After this, Seras allows Alucard to suck her blood and transform her into a vampire. She becomes his servant and is employed as one of Hellsing's soldiers soon after. 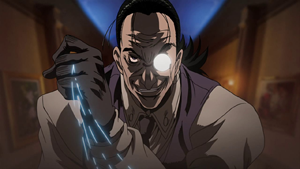 Click here to see him as a young adult 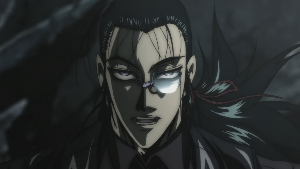 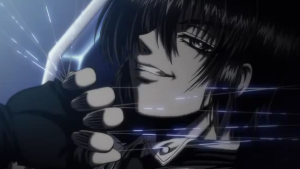 Voiced by: Motomu Kiyokawa (old) / Daisuke Namikawa (young adult) / Romi Park (teenager) (JP), Ralph Lister (old) / Liam O'Brien (young adult) / J.D. Stone (teenager) (EN)
"Oh dear, I missed... I guess I'm not as spry as I used to be. My name is Walter Dornez, butler to the Hellsing family and former master vampire hunter. I highly recommend pissing yourself, followed by a course of praying to your impotent god."

Integra's butler and also the retired retainer of the Hellsing Family. He is known as the "Angel of Death", due to his incredible fighting prowess and skill with manipulating ultra-thin wires that can cut nearly anything to ribbons. Don't be fooled by his elderly appearance — to this day, he can still prove to kick a lot of undead ass. 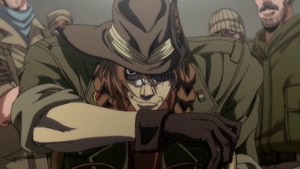 The captain of the Wild Geese mercenaries, who are hired by Hellsing after the entire Hellsing forces were wiped out by the Valentine Brothers. Bernadotte is cynical, snarky, and a pervert, but he's also a cunning strategist and very proficient in the art of war. 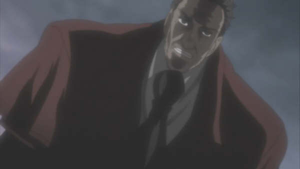 Voiced by: Chikao Ohtsuka (JP), Curt Lowens (EN)
"This is not a nightmare you will be awaking from. You castles are plundered, your dominion is in ruins. Your servants destroyed. And the girl has fled this place forever more! She will never be yours, Count! You are judged, and found wanting Vampire King! You have nothing! You are nothing! Nothing!"

A Dutch doctor who took interest in many fields, he was also a master vampire hunter whose greatest accomplishment was defeating Count Dracula. After he captured and enslaved Dracula, he founded the Hellsing Organization as a means of fighting the vampire threat. 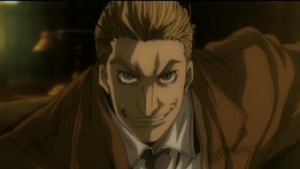 Voiced by: Chikao Ohtsuka (old) / Daisuke Namikawa (young) (JP), John E. Breen (EN)
"Alucard is too powerful of a drug to be used as anything more than the occasional medicine."

Integra's father and former leader of Hellsing. He oversaw and personally conducted the operation during World War II where Walter and Alucard raided Millennium's headquarters in Warsaw, Poland.