As a sequel to the Watchmen comic book series, all spoilers related to that story will be left unmarked. 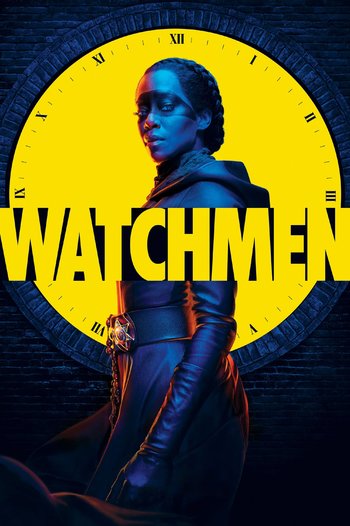 It's time.
"Nothing ever ends... it's only just begun."
— Adrian Veidt / Ozymandias
Advertisement:

Watchmen is a 2019 HBO miniseries created by Damon Lindelof and inspired by the eponymous comic miniseries by Alan Moore and Dave Gibbons. The story is an original present-day sequel to the comic, and it is not connected to the 2009 film or any following material. Gibbons serves as an artistic consultant on the series.

Set 34 years after Ozymandias' attempt to prevent nuclear annihilation (by killing millions in New York City and the areas close to it), Watchmen explores a contemporary society that outwardly resembles a more ideal world, but is in reality rotting from within. After domestic terrorists in Tulsa, Oklahoma massacre police in their homes in a terrorist attack, the police decide to model themselves after the costumed vigilantes that were outlawed so long ago. And when one cop is nearly killed while investigating this fringe group — known as the Seventh Kavalry — several masked police officers soon find out that a vast and insidious conspiracy is at play.

The series premiered on October 20, 2019 with a nine-episode run. The future of any second season is murky. Officially it is a miniseries since Lindelof has said he feels like he’s told the story he wanted to tell. However, HBO has left the door open for him to continue should he want to, which he hasn’t ruled out.