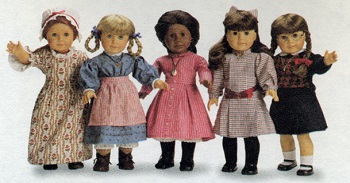 The American Girls Collection — generally referred to as "American Girl" — is a collection of dolls and books that show history in various time periods ranging from Late Native America to The '80s — all through the eyes of the average nine-year-old girl. They also have and have had a number of other lines.

Since 2001, there has been a "Girl of the Year" (GOTY), a 9-to-13-year-old girl who represents the year she came out. Initially, they were just "limited edition modern girls," only gaining the one-a-year schedule with Marisol. Girls of the Year include:

Girls of the Year