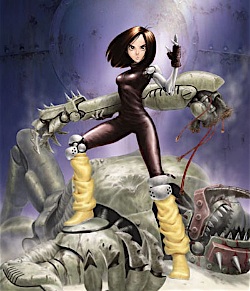 In the early twenty-sixth century, a wealthy elite live lives of sybaritic luxury in Tiphares (Zalem in the original Japanese version), a city that floats in the sky. Below the city, though, is a city-sized scrapyard called the Scrapyard (Scrap Iron City in the original Japanese version) to which it constantly contributes its trash; scraping out a living there are all manner of thugs, criminals, scavengers — and the occasional idealist.

One particular idealist is Ido, a cybernetic surgeon and outcast from Tiphares, who offers medical and mechanical repairs to those who have replaced parts of their bodies with machinery. One day, he finds the head and shoulders of a cyborg on the scrap heap. The brain within the head still lives, and he brings her home to rebuild her. Because the face and what little is left of the body appears to be that of a young girl, that's how he rebuilds her. She's a quiet, almost shy thing, practically mute, and he names her Alita (Gally in the original Japanese version).

Things get complicated when she discovers that her benefactor is also a bounty hunter... and decides that she, too, will hunt dangerous criminal cyborgs. What no one expects is that somewhere in her lost memory are all the skills needed to do so...

The manga series Battle Angel Alita (titled Gunnm in Japanese) written by Yukito Kishiro, initially ran from 1991 to 1995, at which point it was ended due to ill health on the part of its creator. In 2000 it was revived, initially for a limited run to provide an epilogue based on the final scenario of the PlayStation game Gunnm: Memories of Mars, but the new series, Last Order, has since spiraled into a run longer than the original series, finally concluding with Volume 19, making it more than twice as long as the original. In October of 2014, Battle Angel Alita: Mars Chronicle (Gunnm: Kasei Senki), the sequel to Last Order, started.

In 1993, an anime OVA was released based on the first two volumes of the manga (it was later released in the United States by ADV Films under the name Battle Angel). There are no plans to continue animated adaptations, but a live action version revisiting the same first two volumes of the manga as the OVAs,note Taking some details from later volumes titled Alita: Battle Angel finally got out of Development Hell, and was at long last released on February 14, 2019. Thanks to James Cameron grabbing the license, the OVA is no longer sold in the United States.

When the manga was released in English as Battle Angel Alita by Viz Media, the name of the main character was changed from Gally to Alita, which — along with some other changes — may cause confusion for some.

There are also two short spin-off mangas. One, Ashen Victor, stars Snev, the Crash King, a once-promising Motorball player who crashes in every race he runs. The other, Another Stories, is a collection of four separate side stories that flesh out the universe a bit.

Art-wise, the manga's cyberpunk style is reminiscent of a cross between Moebius and Simon Bisley.