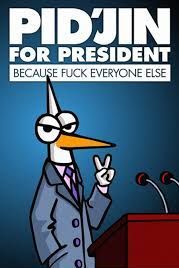 "These brave men died for their country. Send money to their bitches and hos."

The dimwitted President of the United States of America. He has been in every single American war since WW1. He is aware of the Proxies existence but allows them to kill as long as they pay him. Despite his goofy behavior, he can occasionally show hints of brilliance.

The Vice President of the United States and President Bush's Yes-Man.
Ducky

President Bush's beloved teenage daughter, who is also a duck. She is Bush's oldest child. Her brain is the largest in Washington, DC (certainly bigger than her father's) and she is gifted in math, but she is still young and immature. She is a mother of 5. Her father hopes to pass his presidency onto her when she gets older.
President Bush's unnamed son

President Bush's unnamed son and Ducky's (presumably younger) brother. Bush planned for him to be the next president before he was killed in Iraq sometime before the series began.

The beloved (and, usually loving) spouse of President Bush and First Lady of the United States. A woman of considerable size and powerful moods, good and bad. When enraged, she becomes an elemental force of raw destruction (and insults).