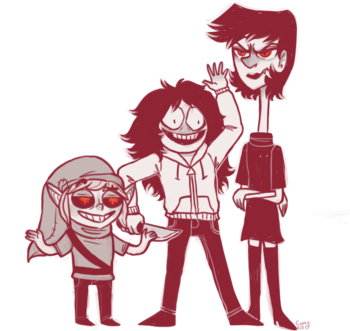 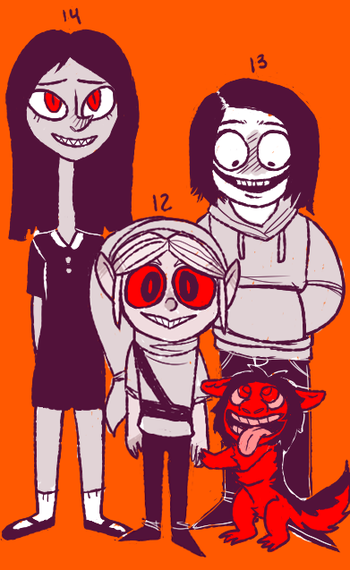 Jeff the Killer, BEN, and Ms. P, the three main characters. They've been friends since Proxy High. They have endured and suffered more than most people do, but they have only become closer over the years, you just might not be able to tell through all the screaming and yelling. They spend more time together than they do with anyone else, and whenever there is a problem, they always try to solve it together. 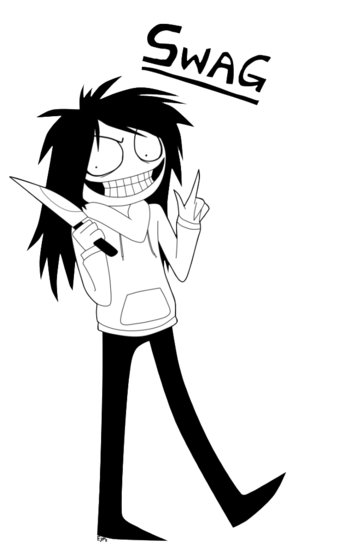 "For the hundredth time, Ms. P, I won't forget. Nag nag nag. Sometimes, I think I should have slit my throat that one night."
Click here to see Jeff's illusion form. 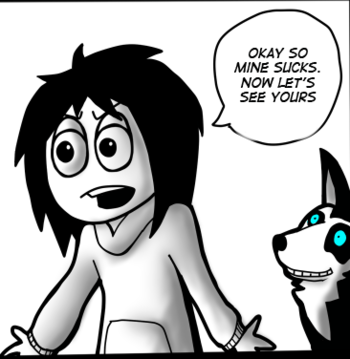 The second-in-command of the Proxies and Slenderman's pupil. Originally a normal teenager, Jeff’s life turned upside down when a group of bullies attacked him and his brother Liu. Jeff beat up the bullies, but Liu was framed and sent to Juvy, which emotionally scarred him. After this event, Jeff's mother made him go to the birthday party of their neighbor's son, where he confronted the bullies again. In a fit of rage, Jeff killed the bullies, but one of them was able to set him on fire after covering him with bleach and alcohol. Jeff ended with bleached white skin, burnt black hair, red lips, and a twisted mental capacity. Jeff then finally snapped and killed his family, even Liu. Jeff is still out there, looking for victims and before he kills them, he tells them to “Go to Sleep.”.

After Jeff graduated from Proxy High he hung out with BEN a lot, BEN dropped out of school when he was 10 after he was convinced to join Zalgo's army until Jeff managed to convince him otherwise and BEN finished Proxy High and joined the Proxies. Jeff attempted to follow along with Ms. P and pursue higher learning (she is learning how to do Slendy's job) but since he lacked the qualifications he decided to work for Slendy instead.

He is incredibly selfish and mean, but the Proxies keep him around because they know he won't get along well with anyone else. Among other things, he hates humans, gingers, liberal views, people making fun of his appearance, and women. 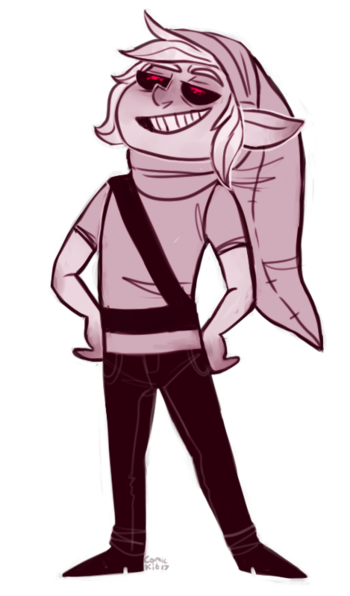 "Yeah, far out, dude."
Click here to see BEN shortly after his revival.

A long time ago, a gamer bought a copy of Legend of Zelda: Majora’s Mask from a shady old man that was owned by a kid named Ben who supposedly died by drowning. However, the spirit of Ben, named Ben Drowned, started messing with the game after the Ben file was deleted before he was able to escape and haunt other forms of technology.He is Jeff's best friend and beloved Proxy. He specializes in drug-dealing, gaming, and watching TV. He lives in cyber-space, and works undercover at a pizza joint in the Human World.

He also has his own official Tumblr page for fans to ask questions.

"Oh, sweetie. It's hard being beautiful. Not for me, of course, but for it must be hard on you."

Ms. P, or Ms. Penicilneck, is Jeff and BEN's close friend and Slenderman's adoptive daughter. She was born with an abnormally long neck. The full details of her backstory have yet to be revealed, although it's constantly stated her parents gave her up to a traveling circus where she was later found by Slenderman and raised to become a Proxy. She hates being judged for how she looks and is not afraid to remodel someone's face for teasing her. She now works as a Proxy tutor for Sally and many other Proxy children.