Characters / Pastamonsters The Under Rhelm

The elitist and chauvinistic mayor of the Under Realm. This mouse is your typical politician: loud and self-confident even when he has no idea what's going on, and willing to say whatever must be said to convince others to shore up support for him. Here his most prominent roles have him hobnobbing with his city's elite citizens, although he overall appears to be slightly more capable in his mayoral duties.
Sheriff Wayne

The chief of the Under Rhelm PD. A werewolf who is lazy, gluttonous, and not very good at his job.
The Unwanted House Guest 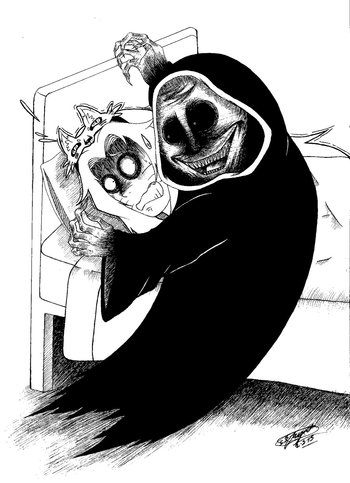 "Sorry, kid, I don't do that stuff anymore. How about a hug? That's the best kind of magic there is!"

A... person, that's for sure. UHG is one of the more energetic, strange and mysterious monsters of the Under Realm. He is easily one of the weirdest of any of the characters, spouting gibberish and playing up a persona of a wacky and borderline-insane individual.

An animatronic endoskeleton and well-known Monster in the Under Realm.
Tails Doll

An evil demon who was initially imprisoned in Slenderman's vault before being released by Jeff and BEN.

The Under Realm's resident doctor.

The Stiltwalker (AKA the Strider)

The Stiltwalker (AKA the Strider) 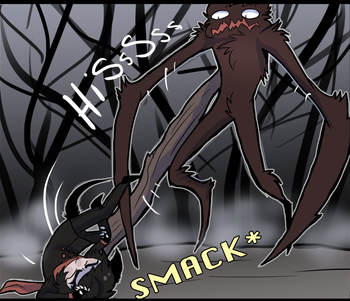 A highly dangerous monster and criminal that was being transported to a prison until it escaped and apparently killed everyone else onboard. It now roams around in the Dark Forest, waiting for unsuspecting monsters to eat. It is a spider-like creature that is about 10 to 12 feet tall and kidnaps anything that it sees and takes them to its lair for a slow and painful demise.

The Skin Taker was a skeleton marionette and an inhabitant of the Abysmal Kingdom, who is known for grinding people’s skins. He was very calm and somewhat sadistic. He did not seem to acknowledge skinning his victims as cruel, evil, etc. He actually seems to think he's doing them a favor. The Skin-Taker believes being dead is a different version of being alive, as he speaks of the dead as if they were still alive. As a matter of fact, he rarely has any sympathy for the living, but plenty for the dead. Nowadays, he is a fading 1970s television personality who is currently struggling to rehabilitate his career, long tarnished by divorce, drug addiction, payola, public lasciviousness and multiple run-ins with the law. He is now the host of Show Some Skin, a talent show and is also co-host of the Kill-o-Gram segment of liberal-leaning FM radio station WCTR 95.6 alongside.

The Seedeater, also called the Birdman, is A half-bird, half-human creature that stalks and eats any monster who happens to come across it. It wears a rag mask that has one eye hole cut out for it to see. The other one seems to be stitched. Its skin is dark green/brown and it has long dark hair. The Seed Eater's mask has a second hole for either a mouth, a beak or a snout.
The Showman

The sadistic game host of Wheel of Death. He captures unsuspecting monsters and forces them to compete in his incredibly dangerous game show for the entertainment of the Under Rhelm.

Probably best to avoid this guy.
Suicide Mouse.avi is a supposed “lost” Disney cartoon believed by many to be cursed. The video contains a character resembling Mickey Mouse walking across a city while a public suicide is heard. Many believe that those that fully watch it go insane and eventually commit suicide.
Isaac Watkins

An ex-journalist who was investigating the Epsilon Cult in the 80's. He is under the impression that the Epsilon Cult's leader, Epsilon is evil. Apparently, he wants a Proxy to find him.
Epsilon

The head of the Epsilon Program, a religious cult based on equal parts Scientology and Raëlism. His public profile is that of a somewhat bizarre, yet helpful cult leader wants to bring happiness to the unfortunate. He is also known to be plagued by terrible rumors of being a serial killer, though this has yet to be proven. Epsilon is, in fact, a sadistic serial killer who rapes and murders the members of his cult, or any person unfortunate enough to catch his attention. These atrocities are frequently covered up by his own political status.

Vlad
A masked Russian member of the Epsilon cult who tracks down and kills anyone who tries to bring down Epsilon.
Clyde

A human touring through the Under Realm.
Jane the Killer

Jane was originally a normal teenage girl with a happy life and a loving family. Then her life changed when the infamous Jeff the Killer murdered her family. Consumed by grief and revenge, Jane snapped and adopted the persona of Jane the Killer. Jane then committed a series of murders herself, fantasizing that the victims were Jeff. Eventually, she tracked him to the Under Realm, where she patiently waits to spring her trap and kill him...
Hanson

The caretaker in Bigmouth's mansion with a seriously deformed hand.