open/close all folders
Advertisement:
In General
The richest, well-known, and well-connected family in the Under Realm. The family consists of the Great Leader Lord Zalgo, the two sons of Lord Zalgo, Slenderman and the eccentric Splendorman, the perverted brother of Zalgo, Sexual Offenderman, the distant and flamboyant cousin of Slenderman, Trenderman, and the rude and reckless teenage son of Slenderman, Slenderson. They all have their quirks and personalities but are competent enough to keep the family business running.
Slenderman 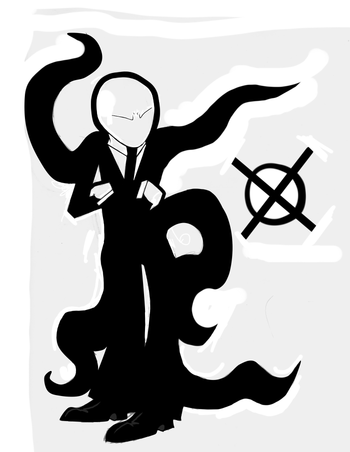 "And you wonder why I hate you."
Coming from a generation of several monsters similar to him, the Slender Man is the son of the Lord of the Pit, Zalgo. He is believed to be a child murder and a ferocious monster. In actuality, this Slender Man actually wants to wipe clean his ancestors’ name and be accepted by other Monsters. Instead of killing children, he actually kills the parents who abuse their children and take their children so that they can be raised on a better life. Despite this, the Slender Man can still be a dangerous being and caution should be made when approaching him. He is the absolute leader of the Proxies and an incredibly popular monster within the Under Rhelm.

Splendorman is the older brother of the infamous being, the Slenderman. Like his younger brother, he wants to wipe clean his ancestors’ name and be accepted. However, he openly went up against his father, Zalgo, and had his powers removed. He now goes around spreading joy and happiness under the name the Splendorman.
Sexual Offenderman

Sexual Offenderman is a member of the Slender family and is the Uncle of the Slender Man. Unlike most of his species, however, he prefers to go after young women, almost similar to that of an Incubus. He is known for his flamboyancy and for being a heavy smoker.
Advertisement:
Trenderman

Trenderman is the fashionable cousin of Slenderman. He occasionally goes around in a brown sweater, a white undershirt, brown pants, and sometimes glasses. He's been known to act like a drama queen and can't stand anyone who says that they go for the "swag" or wears crocs. Like his cousin, he wants to clear his name and be accepted, but for the purpose of running a fashion magazine.
Slenderson

Slenderman's biological son and heir to his fortune. Slenderson is entirely different from his father, foremost being that he's reckless and rude. He also realizes his father's schemes are a stupid waste of time. His efforts to explain this to Slenderman only result in insults and brow-beating, so he resigns himself instead to mocking his father and enjoying watching him fail.