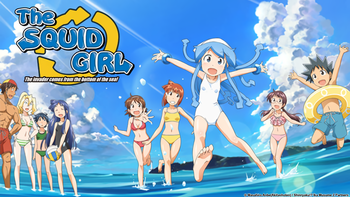 "This invader comes from under the sea
She's got a grudge against humanity
To subjugate the surface, that's what she wants
But she's stuck waiting tables at this restaurant"
— Filk Song "Squid Girl

Shinryaku! Ika Musume -The invader comes from the bottom of the sea!-, known in the English-speaking world as simply Squid Girl, is a manga by Masahiro Anbe that was serialized in Weekly Shonen Champion from 2007 to 2016. The manga was adapted into a 12-Episode Anime by Diomedea in Fall 2010. It was initially licensed and dubbed by Media Blasters, but the American license is now held by Sentai Filmworks.

The Lemon Beach House, run by the Aizawa sisters, is booming with customers in the middle of the summer. This peace will be short-lived. A girl calling herself "Ika Musume" (Squid Girl) emerges from the sea, stating her goal of taking over the world as a revenge on humanity for polluting the oceans. This army of one has a long way to go, though. When she breaks a large hole in the beach house, the sisters force Ika to work for them until she can pay for the repairs. Thus begins a cute comedy about the friends at the Lemon Beach House and world domination... supposedly.

A second season of the anime, titled Shinryaku!? Ika Musume, aired in Fall 2011.

Ika Musume enjoyed some additional publicity in the summer of 2015, when fandom jokes and the mangaka's own love for the game led to a Squid Girl brand costume set being added to Nintendo's Splatoon.

Both seasons can be watched on Crunchyroll

(subbed), and the first season is also available on Netflix (dubbed).

Eiko prepares to take on a ordinary winged slime that immediately vaporizes her.

Eiko prepares to take on a ordinary winged slime that immediately vaporizes her.