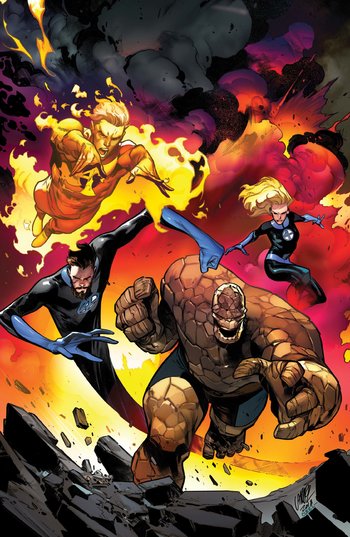 The World’s Greatest Comic Magazine!
"After all these years… All our adventures… We're still together… We're still a team! The Greatest Team Ever!"
— Reed Richards
Advertisement:

In 1999, Lee and Kirby's original run was ranked #31 in The Comics Journal's list of the Top 100 Comic Books of the 20th Century, honored alongside the works of such greats as Carl Barks, Al Capp, Charles M. Schulz and Bill Watterson. It was one of only a few mainstream superhero series to make the list (alongside Jack Cole's original run on Plastic Man, C. C. Beck and Otto Binder's original run on Captain Marvel and fellow Marvel trailblazer, The Amazing Spider-Man) and it was the highest ranked of any of them.