The preacher at the church that the Simpsons family and the Flanders family attend. He really doesn't care much about his job or his "flock" at all, and can even be read as not actually being that religious. He's often no more reasonable on religious matters than Springfield's other religious characters — he just usually has ulterior motives, typically relating to increasing the money he gets from the church. It's revealed that his original caring nature and sincere drive to help his congregation was basically eroded by coming into contact with Ned Flanders and his fixation on being a "proper" Christian. Voiced by Harry Shearer.

Won't someone please think of the children?!

Debut: "Life on the Fast Lane"

The Sunday School teacher for First Church of Springfield. Voiced by Creator/TressMacNeille. 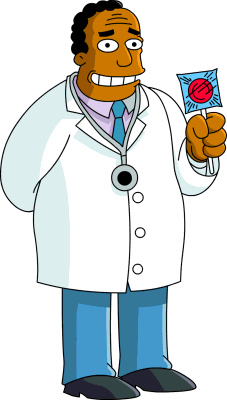 Unflappable family doctor to the Simpsons and a number of other Springfieldians. Voiced by Harry Shearer (1990-2021)/Kevin Michael Richardson (2021-present).

Debut: "Bart Gets Hit by a Car"

A quack physician with an exaggerated Hispanic accent. Voiced by Hank Azaria. 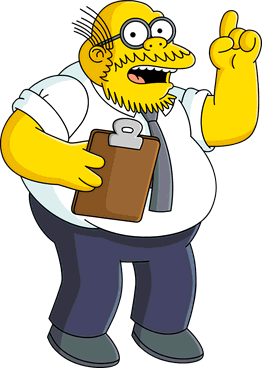 A TV psychologist in Springfield. Voiced by Harry Shearer.

I've said it before, and I'll say it again: Democracy simply does not work.
"Now, at the risk of being unpopular, this reporter places the blame squarely on you, the viewers!"
Debut: "Krusty Gets Busted"

The primary reporter for the local TV News channel. Voiced by Harry Shearer. 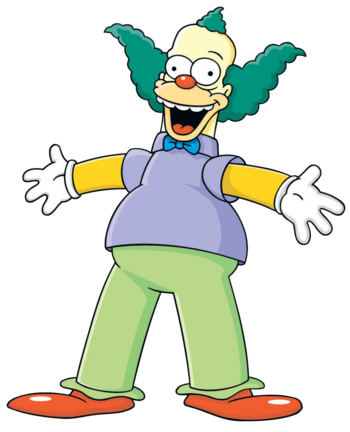 Debut: "The Krusty the Clown Show"
Debut on the The Simpsons: "The Telltale Head"

The most famous celebrity in Springfield, due to being the host of the city's favorite children's entertainment program, The Krusty the Klown Show. Born Herschel Shmoikel Pinchas Yerucham Krustofsky, an Orthodox Jew, he was estranged from his Rabbi father due to his wanting to be a clown instead of following in his father's footsteps. Originally an optimistic fellow who just wanted to help people laugh, years in the ugly reality of showbusiness have left him grizzled, sarcastic, jaded and indifferent, striving only to make as much money as possible. Voiced by Dan Castellaneta.

I shall make this into my SCREENSAVER!

Krusty's sidekick on his TV show, a replacement for Sideshow Bob (who was arrested after attempting to frame Krusty the Clown by robbing the Kwik-E-Mart), Melvin Van Horne plays the part of an inarticulate caveman on stage, but is actually a very refined, dignified intellectual in his private life. Voiced by Dan Castellaneta. 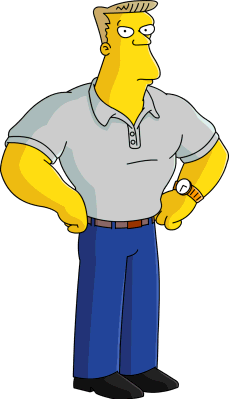 An Austrian who moved to Springfield and became an action movie star, Rainier Wolfcastle is legendary for the over-the-top nature of his movies and his bad acting. Voiced by Harry Shearer. 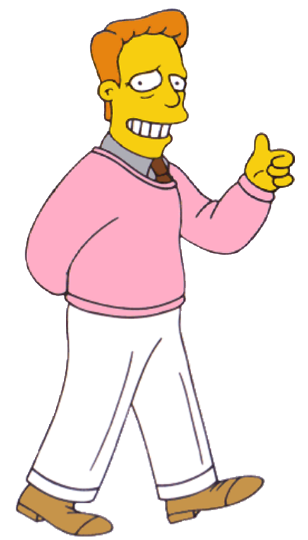 You might remember me from such character pages as this one!

Debut: "Homer vs. Lisa and the 8th Commandment"
Final Episode: "Bart the Mother"

An aging actor who starred in an incredibly wide variety of B-movies, short-lived TV shows, and other projects (like telethons, funerals, medical education films, infomercials, self-help videos, TV retrospectives, Broadway shows, and automated welcome messages for museums, airports, and Nordstrom department store), who frequently reminds people of the works he's been in and clings to his stardom. Voiced by Phil Hartman.

Debut: "Homer vs. Lisa and the 8th Commandment"

A Mike Tyson-esque boxer, complete with a Don King-esque promoter named Lucius Sweet. Was from Springfield, and hated it. He stated in an interview that, "If you ever see me back in Springfield, you know I fucked up bad."note "fucked" was bleeped out Voiced by Hank Azaria. 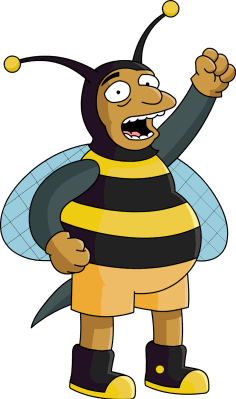 A Latino entertainer for Channel Ocho. In his sitcom, he dresses in a bumblebee costume and performs slapstick comedy. Voiced by Hank Azaria (1992-2020)/Eric Lopez (2020-present).

A daredevil performer who does death-defying stunts. Voiced by Dan Castellaneta.

Debut: "I'm Spelling as Fast as I Can"

An ample-chested vampire-looking woman and a local TV personality in Springfield. Voiced by Tress MacNeille.

A German duo of animal performers. Voiced by Harry Shearer and Hank Azaria. 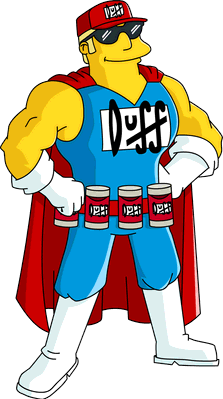 Debut: "The City of New York vs. Homer Simpson"

Duffman is the mascot and spokesman for Duff Brewing Company. He is an athletic and charismatic figure who is seldom seen without his signature uniform consisting of tights, cape, and a utility belt that holds cans of Duff. Voiced by Hank Azaria. 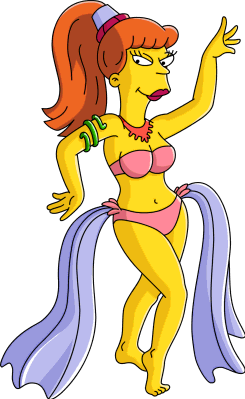 A mascot for Duff Beer. Voiced by Hank Azaria.

A newsreader. He was mostly phased out after the first few seasons. Voiced by Dan Castellaneta.