This is the character sheet for the German World War 2 movie Downfall. The movie has become famous in the internetland for the long-living YouTube Meme Hitler Rants (which now has its own character page) it has given birth to. Tropes listed here are related to the original movie only. Tropes for Adolf Hitler should only reflect his character if they are seen through this movie.

Hitler and his inner circle 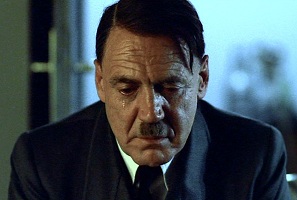 "Von allem Anfang an bin ich nur verraten und betrogen worden!"
"From the very beginning, I have been cheated and betrayed by everyone!"
"Das war ein Befehl! Der Angriff Steiner war ein Befehl!"
"That was an order! Steiner’s attack was an order!"
Portrayed by: Bruno Ganz

The principal character of the movie, Austrian-born Adolf Hitler rose to power in his adopted Germany as Führer in 1933 with a promise to bring Germany back to its glory days, before he started a war and threw the country in it. As of the movie's span, Hitler has become a shrunken, near-defeated shell of a man who would ultimately put a bullet through his skull on April 30, 1945. You should know this. 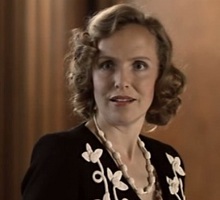 Portrayed by: Juliane Köhler
"Er ist der Führer! Er weiß, was richtig ist!"
"He is the Führer! He knows what is right!"

Hitler's long-time mistress, whom he met when she was a photographer, and wife for all of forty hours before she committed suicide with him. Throughout her stay in the bunker only she had the gall to force her companions to party even as Berlin bears the brunt of a Soviet attack. 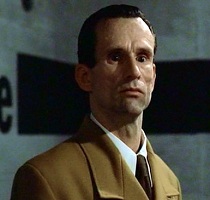 Hitler's most loyal supporter and head of the Ministry of Public Enlightenment and Propaganda, largely responsible for Nazi Germany's policy of antisemitism. After Hitler's suicide, Goebbels was appointed Chancellor, only to commit suicide the next day with his wife Magda after poisoning their six children. 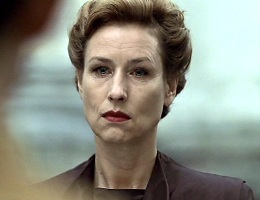 Joseph's wife and a staunch supporter of Hitler, to the point of abandoning all sense of morality in exchange for complete obedience.

The six sons and daughters of Joseph and Magda Goebbels, from eldest to youngest: Helga, Hilde, Helmut, Holde, Hedda and Heide. 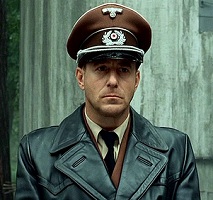 Portrayed by: Heino Ferch
"Sie sollten auf der Bühne stehen, wenn der Vorhang fällt."
"You should be on stage when the curtain falls."

An architect, Minister of Armaments and War Production, and a friend of Hitler, responsible for bringing to form many of his most ambitious infrastructural projects. Unlike Hitler, however, Speer at least believes that Germany should have a future even if defeated, begging him to spare their nation his suicidal ravings. After Hitler's death Speer served his twenty-year prison sentence before traveling the world writing memoirs about his life with Hitler until he died in September 1, 1981. 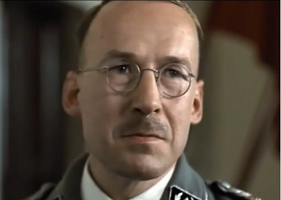 Leader of the Schutzstaffel (SS), the Nazi Party's Praetorian Guards, and the man responsible for establishing the notorious concentration camps. By the end of the war, however, he is secretly planning to forge a peace deal with the Allied Forces (naturally, Hitler is less than pleased when news reached his ears). Unfortunately for him, the British would have none of it, and his only option left is either face court-martial for his crimes, or take the easy way out with cyanide — which he did on May 23, 1945. 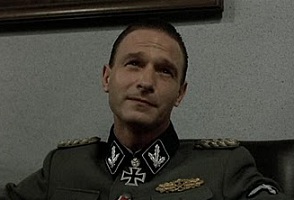 An SS general and Himmler's adjutant. Fegelein is disliked within the bunker by being a petty opportunist, having married Eva Braun's sister Gretl just to climb up the social ladder (and even then he still Really Gets Around), and being lukewarm to Nazi ideology (besides a brief stint on the Soviet front). Naturally, this makes him easy prey for Hitler's rage when the latter learned that Himmler was secretly forging a peace deal with the Allies, and just when Fegelein was preparing to leave Germany, he was caught and summarily executed on April 28, 1945. 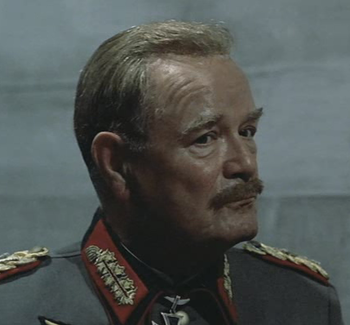 Head of the Oberkommando der Wehrmacht (effectively making him the war minister) and one of Hitler's most prominent yes-men. He signed the documents that accepted France's surrender and declared Germany's surrender. Despite being the third in the German chain-of-command (behind Hitler and Göring), Keitel's job eventually devolved into applying his signatures to various papers, including a decree that condemned millions of Soviet P.O.W.s and civilians to brutality by their German captors. After being ordered to regroup with Admiral Dönitz, Keitel began to grovel before him just as he did before Hitler. He was hanged on October 16, 1946 (like a criminal), after being denied by the Allies a request to be shot by firing squad (like a soldier). 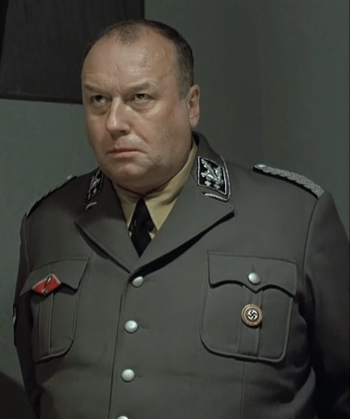 Head of the Party Chancellery and Hitler's private secretary. By the end of the war, Bormann controlled all information that came to and from Hitler's headquarters, allowing him to wield enormous power within the Third Reich. On April 23, Göring sent a telegram to the Führerbunker asking if he was to take command of the Reich, a rather reasonable move as Hitler had all but completely cut himself off from governing and Göring was his designated successor. However, Bormann got hold of the telegram first, and was able to paint it as a coup, though this may have been an attempt to get Hitler to leave the capital. After Hitler's suicide, Bormann fled the bunker. His fate was uncertain for many years (some believing he escaped to South America), but his remains were eventually found in a Berlin subway station. 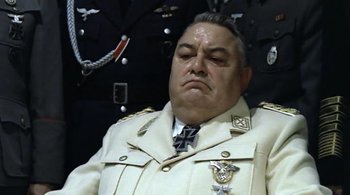 One of the lesser characters in the movie despite being Hitler's Number Two, having been the founder of the Gestapo, the Nazi Secret Police, and leader of the Luftwaffe (air force). His relationship with Hitler, however, started to sour due to incompetence in the battlefield, and was subsequently fired when he sent a telegram to Hitler asking him to bless him as his successor upon learning of his impending suicide. He was subsequently captured by the victorious Allies and found guilty of war crimes and crimes against humanity, but chose to bite a cyanide pill before he faced the gallows on October 15, 1946. 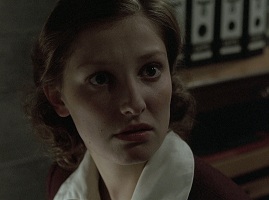 The viewpoint character of the movie, Traudl was the youngest of Hitler's private secretaries at age 22 and oblivious to all the crimes Hitler and his lackeys did in the name of National Socialism. In three years' time, she witnesses Hitler's slow descent to madness and ultimately suicide. After several interrogations by the Soviets, from which she learned of Nazi atrocities on their homeland, she was let go to live a quiet life until her death on February 10, 2001, but not before telling her story to the world, some of which would make it into this very movie. 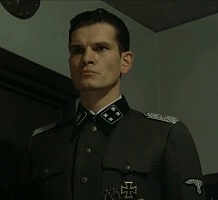 An SS Major and Hitler's personal adjutant. As one of the saner characters of the movie, all he did was stand by and wait for Hitler's orders, including having to cremate his body. He was later captured by the Soviets and served a decade in prisons in Moscow and Bautzen (East Germany), during which time he wrote his own account of life with Hitler, specifically prepared for Joseph Stalin. He died peacefully on October 2, 2003. 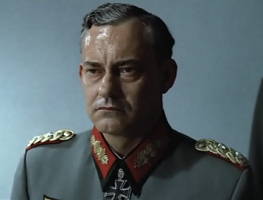 Infantry general of the Wehrmacht Heer (Army) and Chief of the Army General Staff. Krebs was pretty much Hitler's military arm during the last days of Nazi Germany, ordering around officers on the front lines to fight till the very end, and subsequently presided Fegelein's court-martial. After Hitler's suicide, he and Burgdorf stayed behind and together committed suicide on May 2, 1945. 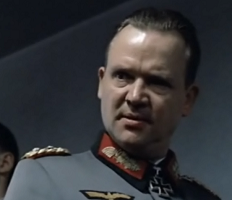 Chief Adjutant of the Wehrmacht Heer during the closing days of World War II. As a veteran of World War I, Burgdorf was passionate about preventing a repeat of Germany's humiliation after that war, and thus sworn fealty to Hitler, including having to facilitate the suicide of Erwin Rommel as punishment for an assassination attempt on Hitler. At the war's end he and Krebs handled Fegelein's court-martial, and both also committed suicide together on May 2, 1945. 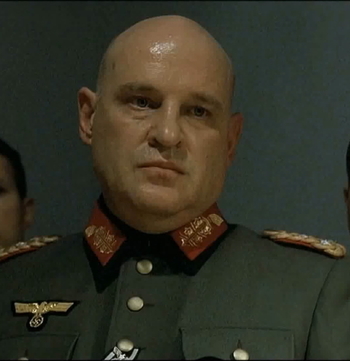 Chief of the Operations Staff of the Armed Forces High Command, deputy of Wilhelm Keitel, and one of Hitler's most loyal generals. At the end of the war he was found guilty by the Nuremberg Trials of committing crimes against peace, waging wars of aggression, war crimes, and crimes against humanity (including deportation of Danes and Jews to concentration camps) and was hanged along with Keitel on October 16, 1946. 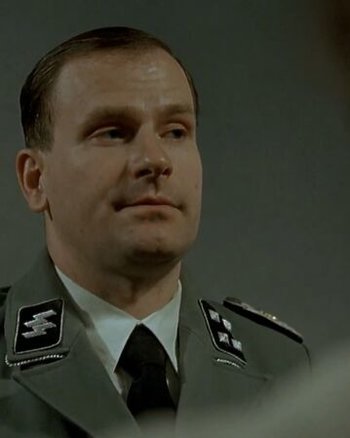 Adolf Hitler's personal valet, attending to all the Führer's personal matters. He is first shown welcoming Traudl and the other applicants for the position of secretary to the Wolf's Lair, and remains at Hitler's side even as they're confined to the bunker. He spent ten years in Soviet captivity and died on March 9, 1980. 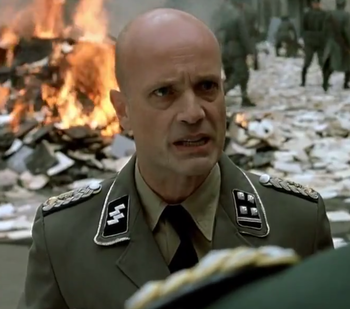 Professional doctor and SS colonel. As one of the more honorable characters of the movie, he left a comfortable desk job to participate on the Soviet front to earn his own chips the hard way. During Hitler's last days he volunteered to work as a doctor on the bunker area. He was captured then subsequently released by the Soviets, and later told his story to American historian James O'Donnell 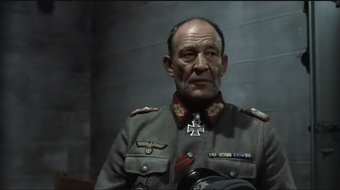 A General of the Wehrmacht Heer. Having led the Nazis to the front lines of the Soviet front, he would spend the last days of Hitler leading Berlin's Last Stand against the Soviet counterattack. He was also forced to keep mum about Hitler's suicide to all Soviets save Joseph Stalin himself, and was also forced to break out the news of Germany's surrender. He died in exile in Soviet Russia on November 17, 1955. 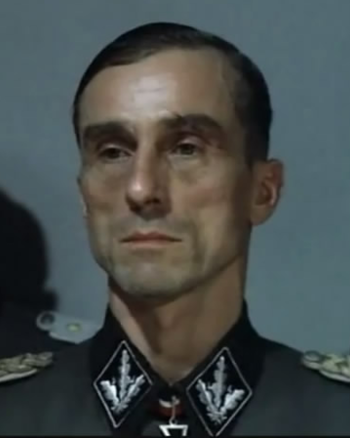 Brigadier General and one of the original 120 members of the SS during its inception in 1933. He came to the attention of Nazi leaders for the way he performed his duties in France during the opening days of World War IInote  This included the mass murder of British prisoners of war who were shoved into a barn and machine-gunned to death. Mohnke refused to take prisoners as this would only slow up his advance. he repeated this action - freequently - in Russia., he was eventually transferred into Berlin to personally lead the portion of the city's Last Stand within the vicinity of Hitler's hideout. After the war's end he was imprisoned by the Soviets for a decade before returning to Germany, where he spent the rest of his life as a truck dealer until his death on August 6, 2001. 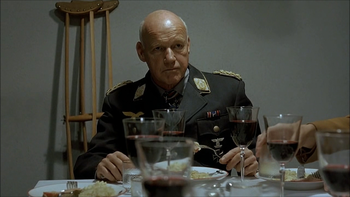 A Luftwaffe general who was an early member of the Nazi Party. He commanded air fleets in Poland and Russia. On April 26, he was summoned to Hitler’s bunker to take command of the Luftwaffe. 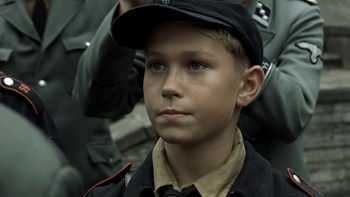 A fictional character and a child soldier who gleefully serves the Hitler Youth during the last days of Hitler. His role is primarily to serve as the face of the suffering German citizenry.

A general of the Waffen-SS. Hitler places his hopes on him being able to defeat the Soviets, but suffers a nervous breakdown when he learns Steiner did not attack.