The various characters belonging to the Last Light Consortium of Gearbox's game Battleborn.

The mostly-cybernetic LLC is the greatest economic power left in the universe, defined by a relentless pursuit of profit, no matter the cost. Once a constituent body of the United Peacekeeping Republics, the LLC abandoned the coalition when it became clear that principles and purpose did little to contribute to the bottom line. Owns and operates Minion Robotics, the largest weapons manufacturer still standing. 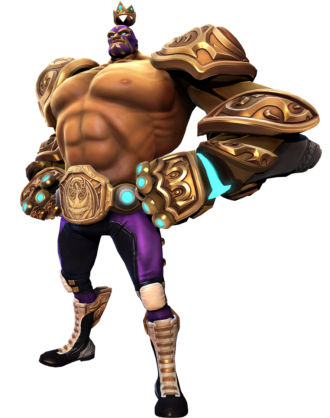 El Dragón, the champion space Luchador, lost his arms in a professional wrestling match against the demented robotic artificial intelligence, ISIC. Ironically enough, the LLC patched him up with robotic arms and now El Dragón is more dangerous than ever, featuring a plethora of trademark moves like the Dragon Splash, a double arm clothesline, and his finisher En Fuego. He may have lost the title fight to ISIC, but El Dragón still considers himself the Undisputed Champ, and that swagger helps him increase his robotic power with every kill he makes.

El Dragón is an LLC Attacker. Initially, he was unlocked as a playable character upon reaching Command Rank 20 or by winning 5 matches as an LLC character. After the Winter Update though, he and the rest of the core 25 Battleborn became all unlockable after completing the Prologue mission. 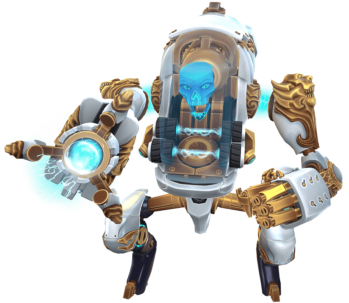 Once the lead manufacturing Magnus of Minion Robotics, ISIC abandoned his post to crash reality itself through the application of unthinkably complex code. Though debugged by Kleese, this Magnus is still regarded as among the most nihilistic and terrifying of the Battleborn.

ISIC is an LLC Defender. Initially, he was unlocked as a playable character upon reaching Command Rank 30 or by completing The Agorithm mission. After the Winter Update though, he and the rest of the core 25 Battleborn became all unlockable after completing the Prologue mission. He serves as the main antagonist and final boss of The Agorithm. 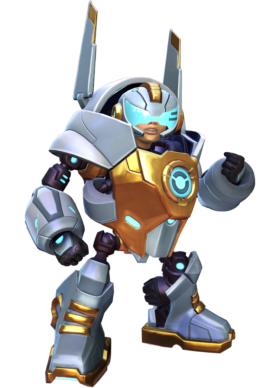 Enduring a childhood sorely lacking in parental affection with the family's robotic bodyguard, Marquis, as her primary companion, Phoebe Elizabeth Audelia Hemsworth IV was determined to create a more suitable playmate. Realizing that the Titanium Dandy line of robots made for excellent marksmen but poor nannies, she set her genius towards the development of a new line of Magnuses specifically designed for childcare. The result was an unnamed production line, referred to only by its marketing tagline: "Kid-friendly, Ultra-dependable". It was engineered with everything a child or parent could want in an AI: an inviting, humanoid face; compact, unintimidating design; medical drones; marketing-approved entertainment holos pre-loaded into memory; bullet-resistant paneling! The Hemsworth Intelligence Enterprise's newest prototype was ready to take what's left of the universe by storm, and a select run of advanced models was ready for release when the unthinkable happened.

It was during the prototype's initial startup sequence that the Magna Carta suddenly went offline. Adrift with no external reference or personality data banks to draw from, the first picoseconds of Kid Ultra's existence were blank digital oblivion. The only source of hard-coded information in his brain was the library of over 60,000 cartoons, comics, movies, and video games intended for placating and educating children. Surprisingly, instead of going on a murder frenzy like his fellow Magnuses, Kid Ultra took off into the Solus System, determined to "bring crime to justice". Without the guidance of the LLC's governing AI, Kid Ultra built his own operational parameters based on a fictional universe full of supervillains, crime-solving adventures, and sold-separately accessories.

Several years later, stories of a child-sized robot patrolling the Detritus Ring made their way to the Battleborn. Unarmed, all Kid Ultra was able to do was politely ask the pirates and raiders he encountered to give up crime and consider being a "good guy" instead. Realizing what her delusional Magnus was doing, Phoebe entreated Ghalt to bring him in. It wasn't until Kleese noted that his modular chassis was compatible with LLC weaponry that Ghalt became interested. Once he was transferred to Nova’s engineering bay, Kleese stuffed his diminutive casing full of rocket launchers, a bola thrower, and adjusted his logic inhibitors to allow for defensive use of force. With his new fully-equipped arsenal, and a team at his back, Kid Ultra was finally the hero he wanted to be. He was a Battleborn.

Kid Ultra is an LLC Supporter. He's the fourth of the five new free heroes

announced to be released post launch of the game, the 29th Battleborn. He was officially released

on November 3, 2016. However, for players who own the Season Pass or the Battleborn Digital Deluxe Edition, they got to play Kid Ultra a full week early on October 27, 2016. He can be unlocked as a playable character using 47,500 in-game credits or for Digital Deluxe and Season Pass holders, by using the hero key that accompanies with him on release to unlock him instantly. 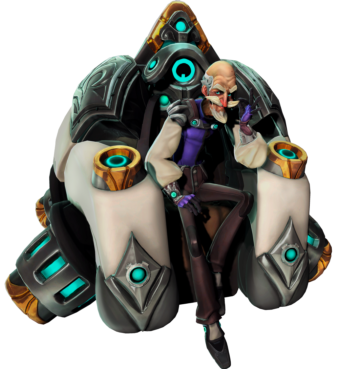 Gunnar Kleese was once director of Minion Robotics and is never without his made-to-order Battle Throne, complete with a smooth gliding propulsion system, an assortment of the finest cannons and tasers, defensive Energy Rift shield system and a miniature black hole generator. Following his dismissal as director of Minion Robotics, the cantankerous Kleese now serves as Nova's chief science officer and mad-scientist-in-residence. Abhors away missions but relishes opportunities to test his tech.

Kleese is an LLC Supporter. Initially, he was unlocked as a playable character upon reaching Command Rank 36 or by earning a Silver rating on all Story missions. After the Winter Update though, he and the rest of the core 25 Battleborn became all unlockable after completing the Prologue mission. 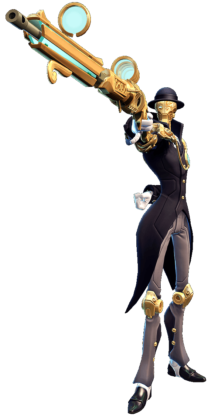 Marquis d'Caliber was once butler to Phoebe before an odd encounter with the LLC's AI leader, the Magna Carta, altered his personality. Now, this high-society sociopath wreaks havoc on the unwashed masses with his sniper cane Bindlebane and his explosively temperamental mechanical owl, Hoodini.

Marquis is an LLC Attacker. Initially, he was one of the few initial playable characters unlocked after completing the Prologue mission. After the Winter Update though, the rest of the 25 core Battleborn joined Marquis and these few in being unlockable after completing this mission. 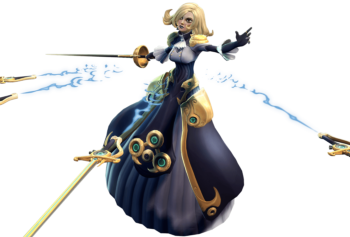 Counted among the LLC's greatest engineers, Phoebe Elizabeth Audelia Hemsworth IV utilizes powerful technology to move swiftly about the battlefield, and an array of five telekinetically-suspended swords to annihilate her foes. Inventor, adventurer, and heiress to one of the largest family fortunes within the Last Light Consortium, Phoebe is NOT to be trifled with. Always ready for adventure, Phoebe rushed to the aid of the universe, accompanied by her multi-phasal sabre, Addonexus, earning her the title "Mageblade" among her friends. Phoebe is lured by her fascination with Eldrid "magic," ancient relics, and her penchant for bringing more of her Hemsworth Magetech to the battlefield.

Phoebe is an LLC Attacker. Initially, she was unlocked as a playable character upon reaching Command Rank 22 or by killing 50 enemy players. After the Winter Update though, she and the rest of the core 25 Battleborn became all unlockable after completing the Prologue mission. She is the main character featured in the fifth DLC Story Operation "Phoebe and the Heart of Ekkunar".

The non-playable LLC characters including LLC based enemies.
Magna Carta
The Magna Carta is a trade-specialist artificial intelligence that ran the LLC for many years. It officiated all of the trade compacts and agreements for the faction. To join the LLC required an established permanent link to the Magna Carta who administrated the position within the organization. It is also the governing A.I. that once kept all the Magnuses in check. From Magnus ships such as Nova to company operation overseeing Magnuses like ISIC, it kept their programs running in top working condition and prevented them from going berserk via working as a limiter, a kind of buffer that prevented them from pursuing infinite potential infinitely. The Magna Carta was thus a vital cornerstone of the LLC which is why everything went wrong when it for some reason disappeared in an event called "The Great Severance".
MINREC 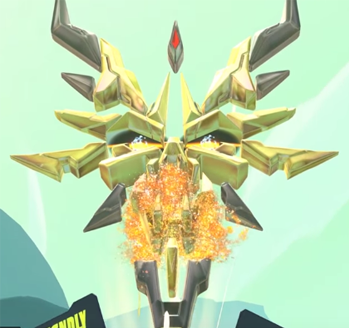 MINREC is a Magnus in charge of running LLC recycling facilities and the main focus of the Meltdown and Supercharge multiplayer modes. He is a crazed Magnus who believes himself to be something akin to a volcano god of sorts and is feared as such. In both Meltdown and Supercharge, he's the main incentive of those modes as the objective is to sacrifice more Minions to him than the opposing team else he'll incur his wrath. 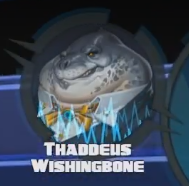 Thaddeus Wishingbone is a mysterious LLC leopard seal and the boss in the DLC Story Operation "Toby's Friendship Raid". Following Rendain's defeat after the Heliophage mission, the LLC employee decided to go rogue and attempt to take over the Solus system. To achieve this, he decides to steal Toby's Berg and with the help of his stolen factory ship convoy, aims to replicate and mass-produce the mech in order to create an army that will aid him in subjugating all of Solus. Aboard his factory ship fleet going around the Detritus Ring at near light speeds, he hopes to conquer Solus unless Toby, Reyna, and the rest of the Rogues have anything to do about it.

In the 7th playthrough run of the DLC Story Operation "Toby's Friendship Raid" as the Rogues have destroyed more than half of Thaddeus' factory convoy, the leopard seal decides to send Nega-Toby, an evil robot knockoff of Toby himself, to deal with them.

Minions
Mass produced by Minion Robotics, Minions are robots that serve as mechanized soldiers and mooks. As LLC products, they are sold to and used by every faction and everyone in the Solus system. This includes both Rendain's forces and even the Battleborn to a small extent use.
Spider Sentries
Voiced by: Christopher Sabat

Spider Sentries are giant spider-like robots. Like Minions, they are LLC products that are sold to and used by every faction and everyone in the Solus system.

In story missions, Sentries are either boss characters or characters that need to be escorted. Notable named Sentries from the missions include Geoff from The Algorithm, Wolf from The Void's Edge, and Chronicle from The Archive.

In the DLC Story Operation "Oscar Mike vs. the Battle School", a Sentry serves as a final boss in each playthrough session. What type of Sentry is faced however changes.