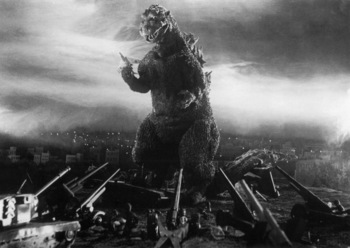 Look, we all know from the title how this is going to end.

In some shows, when a country is attacked by some enemy (alien, monster, evil overlord), their armed forces, which are probably made specifically to defend said country, show themselves rather bad at defending it: they use Hollywood Tactics instead of more efficient and logical ones, with a particular reliance on the Five Rounds Rapid, do evil stuff that just undermine their side for no reason, and refuse to cooperate with The Hero.

The aim is to make the Hero the only one who can defeat the villains: how can you save your world when it can defend itself with no problem thanks to its competent military? This is a staple of Superhero settings, and is quite frequent in stories about an Alien Invasion or a Zombie Apocalypse, because a war consisting of large open Curb Stomp Battles is a quicker way to show how the enemy won than the long and complex battles that would have occurred had the military been competentnote Well, a competent military would have won, as noted above, but then how could the protagonists be protagonists ?. This tends to be averted when the story follows at least one character in the military, especially when they're the one(s) giving orders, as it's not very interesting to follow the story of someone making bad decision after bad decision, while having the army make good decisions without being an important part of the narrative can take the tension away from the actual characters. In some cases, a middle ground is reached: the military does help the characters, and thus aren't completely useless, but since they aren't the main part of the story they don't take actual initiatives, and let the protagonists do most of the job.

Some genres are more prone to this trope than others, of course. A kickass war epic summer action film can have a thoroughly awesome army with the hero a part of it. A zombie film, almost by definition, has to begin with authority's complete failure to contain the situation. Can't have an After the End story without, you know, the end.

Note that this trope isn't about lots of soldiers dying: that's the Red Shirt Army. A military can achieve great victories by swarming the enemy with disposable soldiers, or lose everything while keeping a low casualty record. This trope comes when the military as an institution is of no use. Either the writer doesn't have them appear, or the situation is always such that the army in question isn't allowed to handle it so that the hero(es) can save the day.

Often overlaps with Artistic License – Military. Compare Armed Farces, which is mainly military humor about bumbling incompetent military personnel, though tends to lack them failing at some specific objective. First cause of an Easily Conquered World, though some countries in Fiction Land can have the worst possible army without being conquered. Can include Police are Useless and No FEMA Response, where they don't even try to help. Don't expect anything from them when Adults Are Useless, since (most) armies are made of adults. Often overlaps with Conservation of Ninjutsu, The Worf Effect and Tanks for Nothing. Sister trope of Armies Are Evil.