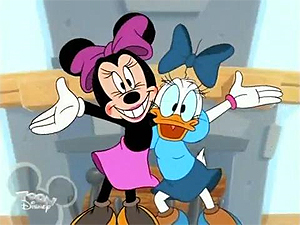 They've got bows, makeup, pink attire, skirts, visible eyelashes, and high heels. Yup, definitely girls. We swear that's Minnie and Daisy.
Ben: What makes you think it's a girl?
Kevin: Yeah, if it was a girl, it'd have a big bow on the side of its head or something.
— Ben 10: Alien Force
Advertisement:

Note that many, many animals already have distinct sex-specific characteristics, though these are almost guaranteed to be totally ignored in designing fictional animal characters. (They are likely to remember that male lions are the only ones with manes, though.) The writers either didn't do their research, which can end up with Animal Gender-Bender, or assumed the viewers wouldn't know what they are.

For animal characters, this is caused by the assumption that the only way to convey gender in such characters is through gender stereotypes in design.

Feminizing accessories and traits include:

Occasionally, the only difference between a boy and a girl will be the location of the bow. If it's a bowtie, it's a boy, and if it's a hairbow, it's a girl. (The bow itself may even be identical.) Human girl characters are sometimes depicted wearing bows on their head, but this is not as pervasive as depicting a female animal character this way.

On the positive side, these gender identifiers are pervasive enough to be considered shorthand for viewers who may be hearing impaired. On the negative side, they are pervasive enough to lead to Viewer Gender Confusion for male characters with stereotypically "girly" traits, including many a Bishōnen. Remember though that Tropes Are Tools and that use of these characteristics aren't bad in and of themselves and helps dispel Viewer Gender Confusion in a quick and easily understood manner.