Character sheet for the protagonists of Inuyasha. 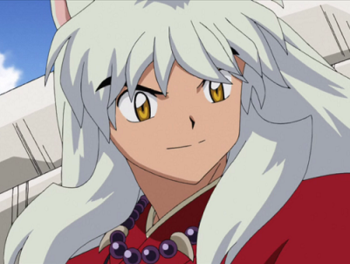 Inuyasha is the son of a dog youkai and a human woman. Persecuted throughout his childhood due to his halfbreed nature, he sought to use the Shikon Jewel to become a full youkai, but fell in love with the Jewel's human guardian, the miko Kikyo. Fifty years prior to the start of the series, Kikyo sealed Inuyasha to a tree with a magical arrow; when Kagome releases him, he resumes his mission to obtain the Shikon Jewel, which requires him to team up with Kagome to track down the broken Jewel's many shards.
Voiced by: Kappei Yamaguchi (JP), Richard Ian Cox (EN), Enzo Fortuny (LA SP), Francesco Pezzuli (IT), Jerome Wiggins (FR)
Kagome Higurashi 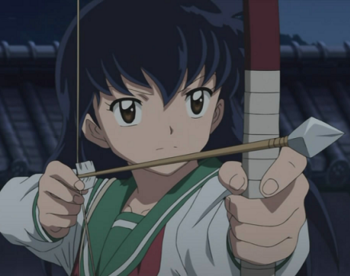 Kagome is a girl from the present era who finds herself in Japan's Sengoku era after falling down an old well in her family's Shinto shrine. She proves to be Kikyo's reincarnation, and discovers that she possesses strong spiritual powers resembling that of a miko. After she accidentally shatters the Shikon Jewel, she joins up with Inuyasha to find and reassemble the broken pieces.
Voiced by: Satsuki Yukino (JP), Moneca Stori/Kira Tozer (EN), Anna Lobo [main voice] and Leyla Rangel [some episodes] (LA SP), Letizia Scifoni (IT), Maelys Ricordeau (FR)
Miroku 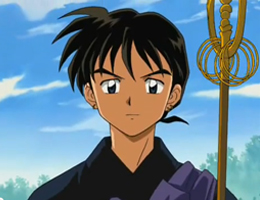 A young, low-ranking, nomadic Buddhist monk, Miroku possesses a Kazanna ("wind tunnel" or "air void") in his hand, a miniature black hole which sucks in anything if it's not kept magically sealed. The wind tunnel is the product of a curse originally put on Miroku's grandfather by Naraku that dooms Miroku's family to an early death unless it can be removed by killing Naraku first. To that end and after an awkward first encounter, Miroku joins forces with Kagome and Inuyasha.

Although Miroku has considerable spiritual power, he is not a very devout Buddhist (he usually uses his religion as an excuse when it's convenient for him) and frequently uses his status to manipulate people into giving him food, money, clothing, shelter etc. He is a skilled con artist and a Handsome Lech who habitually flirts and fondles any pretty girl he meets, usually asking them to "bear his children" so that they can carry on the mission to kill Naraku if he doesn't succeed. 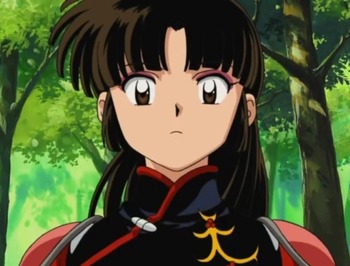 Raised from a young age to be a formidable fighter, 16 year old Sango is a Yamato Nadeshiko coming from a village of taijiya (professional demon slayers). She is the sole survivor of the massacre of her entire village by Naraku's hand, (including Sango's father and little brother Kohaku). After she recovered from the massacre, she is tricked into thinking that Inuyasha is the culprit and attacks him, but soon discovers that Naraku was responsible and joins Inuyasha's group to take revenge.

Sango's primary weapon is Hiraikotsu, an enormous boomerang made from demon bones, but she also has various hidden blades and poison potions stored in her armor and is knowledgeable about many varieties of youkai and how to fight them. Her cat companion Kirara aids in combat and also serves as her steed. 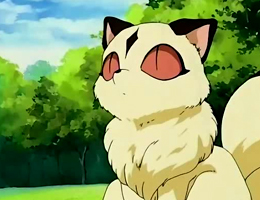 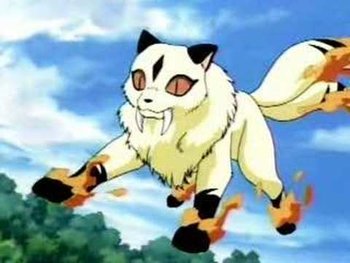 Kirara is a nekomata - a two-tailed youkai cat - who is also Sango's companion. She can change from a tiny feline to a huge fanged one for Sango to ride on, and has the ability to fly in her larger form.
Voiced by: Tarako(JP) 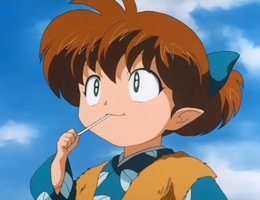 Shippo is a young fox youkai who joins Kagome and Inuyasha following the death of his father. Since he is still a child, he is not very strong in battle, but can change his shape and has a repertoire of trickery that occasionally comes in handy. His youth and immaturity bring him into frequent conflict with Inuyasha; it is not clear exactly how old he really is, given that youkai age more slowly than humans.
Voiced by: Kumiko Watanabe (JP), Jillian Michaels (EN), Laura Torres (LA SP), Laura Cenciarelli (IT), Audrey Lebihan (FR)