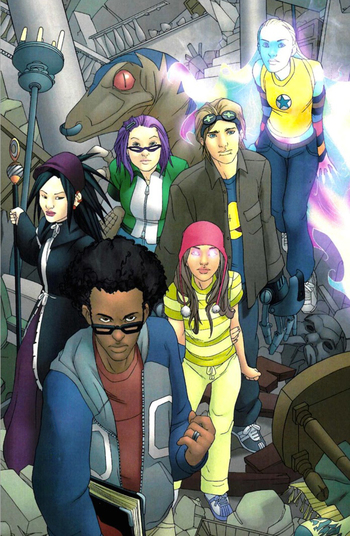 You think you and your parents had conflicts? Tell it to these guys...
Karolina: Is anyone else having a hard time processing this? I mean, no matter what you guys saw down there, it sounds like our parents have been leading some kind of freaky double lives...for years, probably. How is that possible?
Gert: What? How is it possible that our parents lied to us? Let's see: Santa, the Tooth Fairy, the Easter Bunny, um, God. "You're the prettiest kid in school. This won't hurt a bit. Your face will freeze like that..."
Alex: "Everything's going to be all right."
Advertisement:

In 2017, the series would be relaunched under the penmanship of young adult author Rainbow Rowell. See Runaways (Rainbow Rowell) for details on the new series.