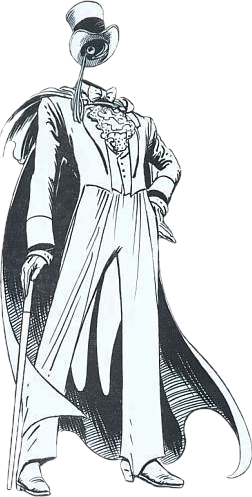 Gentleman Ghost is a DC Comics character and supervillain. His real name is James "Jim" Craddock. He grew up 1800's England, his family was poor, and he turned to robbery to support himself. He became an immigrant to the USA, got falsely accused of a violent crime there, and was killed by a masked cowboy named Nighthawk. He became a ghost and discovered that he could only move on when his murderer moved on to the next plane of existence. Unfortunately for him, it turns out that Nighthawk is one of many incarnations of ancient Egyptian royalty, meaning that both their souls have no chance of moving on. When Nighthawk was reincarnated into Hawkman, Craddock tried to kill him without success. In response, Craddock took on the name of "Gentleman Ghost" and took to antagonizing other superheroes as a way to pass the time.

He was able to successfully cross over the barrier into the medium of television, where he has appeared as a villain in Superfriends, Justice League, Batman: The Brave and the Bold, The LEGO Batman Movie, and Teen Titans Go! vs. Teen Titans.