Spoilers for this game will be marked as usual. However, since this is a sequel to Metroid and Metroid II: Return of Samus, spoilers for those two games, as well as their remakes, will be left unmarked. You Have Been Warned! 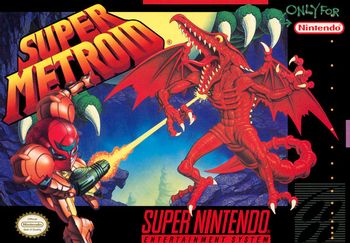 "The last Metroid is in captivity. The galaxy is at peace..."
Advertisement:

Super Metroid, also known alternatively as Metroid 3 from the intro, is the third game in the Metroid series, both in terms of release order and within the series' chronology (discounting the Metroid Prime Trilogy). It was released for the Super Nintendo Entertainment System in 1994, and was the largest game released on the SNES at the time, using a 24-Megabit cartridge (that's 3MB). It was the last Metroid game that Gunpei Yokoi worked on before his departure from Nintendo and death, the first where Yoshio Sakamoto was the main director, and the first with music from Kenji Yamamoto.

Taking place shortly after the events of Metroid II: Return of Samus, Samus has given the Metroid hatchling to scientists aboard the Ceres space colony for further study, in hopes that its energy-producing abilities may be harnessed for non-destructive means. Shortly after leaving, however, Ridley and the Space Pirates attack the space station; killing all the inhabitants and kidnapping the infant Metroid. To stop the Space Pirates from making use of the Metroid for their own vile ends, the bounty hunter gives chase to their rebuilt hideout on planet Zebes.

Where the first Metroid birthed the genre that's an eclectic mix of action, exploration, and platforming, Super Metroid codified the tenets of its gameplay style to become one of the most acclaimed games of the 16-bit era. To this day, Super Metroid is still cited as a master class in level design — teaching its players game mechanics with subtle use of antepieces — and environmental storytelling — apart from the brief introductory exposition recapping most of the events of the previous two games, almost all the storytelling is done through world-building and on-screen events, many described below.

Super Metroid, like most prestige SNES titles, has spawned a fair number of ROM hacks. Among those are "randomizers" that mix up the item placements and/or map layouts. Perhaps the most interesting of these combines

this game with A Link to the Past: Randomizer: any item from either game can be found (though not necessarily used) by Samus or Link, and they exchange items by switching between Hyrule and Zebes. This is accomplished by traveling between four doorways that connect the worlds. Once the player progresses far enough into Link to the Past, Link can move around Hyrule more easily with the help of fast travel; Link can combine those shortcuts with the doors to Zebes, shaving time off Samus' itinerary. The objective here is to defeat both Ganon and Mother Brain, and the ending corresponds with the boss fought last. The most noteworthy repository of non-randomizer ROM hacks (for the entire Metroid series, not just Super Metroid) is undoubtedly Metroid Construction.