Fiddler: 'Like it or not, lad, you've some growing up to do.'
Deadhouse Gates
Cotillion: 'Even so, there was the hint of deadly charm in your old Daru name. Are you sure you will not reconsider?'
House of Chains

'Kruppe maintains a perspective as broad as his waistline, which, as you know, is unceasing. After all, where does it begin and where does it end?'
Toll the Hounds

I deny my first children all. You shall wander the realms, bereft of purpose. Your deeds shall avail you nothing. Your lives shall spawn death unending. The Dark — my heart — is closed to you, to you all.
Toll the Hounds

'There is no struggle too vast, no odds too overwhelming, for even should we fail — should we fall — we will know that we have lived.'
Toll the Hounds

'What lies in the world beyond the island is of no concern to me.'
House of Chains

Skintick: Nimander has plenty of doubts, so many that he's lost his fear of them. He accepts them as easily as anything else. Is that the secret?
Toll the Hounds

My lord honours me for my sacrifice, but his every word is like ashes drifting down on my face.
Toll the Hounds

Anomander Rake: 'Never mind the High Priestess and her answer — always the same one with her, yes?'
Toll the Hounds

Yedan Derryg: 'Father Light abandoned his children and they became a people lost — and lost they remain.'
Dust of Dreams

Anomander Rake: 'I can picture Osserc, circling round and round. Looking for me. Idiot.'
Reaper's Gale 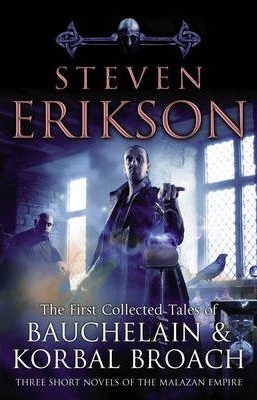 The Tales of Bauchelain & Korbal Broach are a series of spin-off novellas originating in the Malazan Book of the Fallen and written by Canadian author Steven Erikson.

They concern themselves with the deeds and misadventures of Bauchelain and Korbal Broach, two infamous necromancers, and their chronically unlucky manservant Emancipor Reese, but are only losely connected to the events of the main series aside from sharing the setting. All three first made a guest appearance in Memories of Ice, the third volume of the Malazan Book of the Fallen.

As of 2018, the series consists of six novellas:

The Tales of Bauchelain & Korbal Broach provide examples of the following tropes:

Footsteps in the Sky 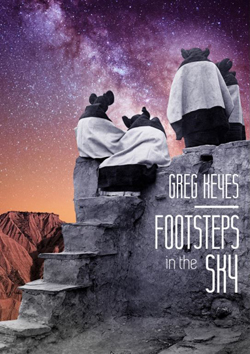 In the world below this one, the people were unhappy. There was much corruption, and two-hearts were everywhere. The elders met in the kivas, discussing where else they might live.
"We have heard footsteps in the sky," one of them said. "Someone must be there. Perhaps we can live there."
From the Hopi Origin Legend

Footsteps in the Sky is a Science Fiction novel by Greg Keyes (who also publishes as J. Gregory Keyes), better known for his Kingdoms of Thorn and Bone and The Age Of Unreason series. Though according to the publisher it was written as early as 1994, Footsteps in the Sky was eventually only published in 2015.

The story begins in the year 2421, several generations into the Hopi people's terraforming effort on a planet they call the Fifth World. Following a prophecy, their ancestors struck a deal with the powerul Vilmir Foundation — which the Hopi call 'the Reed' — in which they and their descendents will engage in the laborious work of terraforming the newly discovered habitable planet in exchange for ownership of it and a place where they can revive their ancient traditions and way of life. By the time of the prologue, the Hopi society on the Fifth World has split into two factions: the traditionals who are engaged in the majority of the farming work and who live on the mesas and follow the Hopi traditions and beliefs, and the lowlanders, who disagree with the choice their ancestors made for them and consider the traditionals superstitious fools. The only thing both factions can agree upon is the likelyhood of the Reed not keeping its promise and invading the Fifth World as soon as it becomes profitable.

Of course, there also remains the unanswered question of why humanity has been able to find several planets with an identical atmosphere just short of being habitable, ready for settlement and terraforming. Even the Hopi who believe the Fifth World to be a present from their ancestor spirits, the Kachina, cannot deny the coincidence. Then three alien ships take up their orbit around the Fifth World and it seems like the planet's original owners are back to claim their territory.

After one single attempt at contact from the aliens, twenty years go by in which the lowlanders' leader, Hoku, and the Reed are frantically scrambling to hide the ships' existence and get a warship to the Fifth World to prevent first contact between the settlers and the aliens, respectively, only for the aliens to release another probe onto the planet at first sight of the Reed's warship. This launches a race in which all three factions try to get their hands on the alien first, to varying purposes. Both the lawlanders and the traditionals mean to use it and its technology as a potential weapon against the Reed, while the Reed seeks to prevent that. Yet the one who reaches the alien first is SandGreyGirl, daughter of Pela, who was the one who found the aliens' previous probe and who has recently died of an unknown cause. And not only does a clone of Pela emerge from the probe, the alien claims that she is the only thing standing between the inhabitants of the Fifth World and her sisters' decision to potentially wipe the planet clean of all life forms and start their own terraforming process from scratch.

Footsteps in the Sky provides examples of: 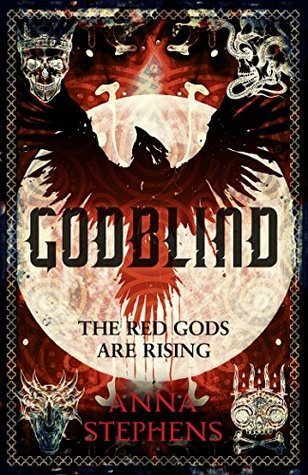 The Red Gods are rising.

The Godblind Trilogy is the grimdark fantasy debut work of UK-based author Anna Stephens. The individual books of the trilogy are:

Almost a thousand years ago, the bloodthirsty Red Gods and their most devoted followers were exiled from the fertile lands of Rilpor into the harsh mountains to the West by the Gods of Light, the Dancer and the Fox God, and have since been kept out by a divine veil.

Godblind tells of how, frustrated with the way things are, the Mireces are about to set into motion their long-term plan of reconquering Rilpor in the name of their gods when a Rilporian slave not only kills their king, but also manages to escape with vital information.

On the other side of the border, a Watcher — a member of the civilian warriors guarding Rilpor's western border — named Dom Templeson sets out for a vaguely defined quest given to him by the Dancer to recover the Harbinger of Impending Doom coming down the mountains, for Dom is the calestar, the most powerful seer to be born in generations.

While the Mireces don't waste time with a Succession Crisis by War Chief Corvus simply killing his way to kingship and setting out for Rilpor, it turns out that the Mireces have allies not only all over the country, but within the royal household itself, where Rastoth, the king of Rilpor, is slowly sliding into madness after the brutal murder of his beloved queen.

Most of the first book tells of the Mireces's slow but inevitable invasion of Rilpor, the breaking of the veil and the return of the Red Gods while the heroes on the Rilporian side scramble to prevent it.

The Godblind Trilogy provides examples of the following tropes: 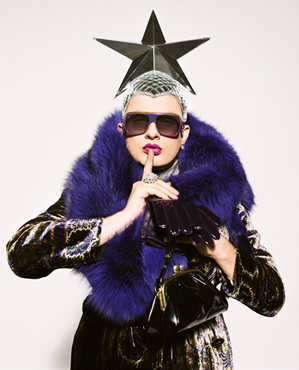 Verka Serduchkanote roughly, the name consists of a affectionately vulgar version of the first name Vera and what can be translated as 'the Angry One (female)' — basically 'Verka the Angry' is a Ukrainian Drag Queen and the best known stage persona of Ukrainian singer and comedian Andriy Danylko. She has recorded several studio albums and appeared in various films, with her best known performance being when she represented Ukraine in the 2007 Eurovision Song Contest, finishing in 2nd place. Verka has remained very popular with the Eurovision fan crowd ever since.

Verka's music is characterized by using a liberate mix of Russian and Ukrainian known as Surzhyknote the stereotypical dialect of Ukraine's rural population, thought of a sign of a lack of education among Russians, poking fun at Russian and Ukrainian (and originally Soviet) social norms, as well as catchy beats and easy to remember lyrics, which have made her songs popular at weddings and any outing that might end in general drunkenness.

The persona of Verka Serduchka began life as a bossy and proudly ignorant middle-aged Soviet train conductor, then ditched her train whistle to acquiere a feather boa and sunglasses and become a flamboyant parody of Russia's nouveau riche class. After the political fallout of her 2007 Eurovision Song Contest performance, Verka again changed her style, now towards an internationally easier readable but no less outrageous look, and started peppering her lyrics with German and English words.

At some point, Verka also acquiered a sidekick in the form of her wide-eyed "mother" from the village, played by actress Inna Bilokon.

In 2015, Verka Serduchka made an in-persona appearance in the film Spy. 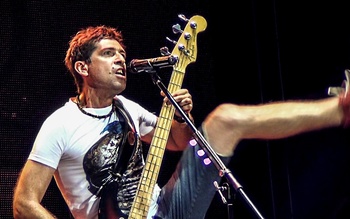 Nogu Svelo! (russ. Ногу свело!; engl. "Cramp in the Leg!") is a Russian Alternative Rock band from Moscow whose style spans Indie Rock, Pop Punk, plain old Punk Rock, Ska and anything else that looks experimental enough. It was established by Singer-Songwriter Maxim Pokrovkiy in 1988 and to this day he remains both the producer and Face of the Band, as well as the author of most of its music and lyrics.

The band's songs are distinguished by their delicate but often highly cynical humour, accessible but seemingly nonsensical lyrics speckled with foreign phrases and almost childishly simple melodies. As it often happens in Russian rock, the lyrics seem to transport a particlar sentiment or veiled message rather than tell a coherent story. Nogu Svelo! was particularly popular in Russia and its neighbouring countries during the '90s, when they kept winning awards for best alternative band.

When talking about his band's name, Max Pokrovskiy has stated that he actively wanted to find a name that would differentiate his band among other bands and would not follow the standard "adjective + noun" pattern. He eventually settled on "Nogu Svelo!"