This page lists the characters from the Synchro Dimension, most notably from the City.

At the heart of the Synchro Dimension lies a classist metropolis called City, consisting of the wealthy Tops and poor Commons, ruled by the Executive Council, and patrolled by Security. Tops continously look down on the Commons, despite making up only 1% of the entire population and the only way to rise up in class is to duel your way to the top. This setting is based on the third Yu-Gi-Oh! series with fan favorites Jack Atlas and Crow Hogan making a return to the series. However, they are alternate counterparts to their originals, done most likely to avoid confusion.

Tropes associated with the City in general:

Shinji Weber is a resident of Commons and he is a friend of Crow Hogan. Shinji hates Tops and speaks of Resistance. He uses a Bee Force/Battlewasp Deck.

Frank, Amanda, and Tanner are the three orphans that Crow looks after.

Tropes associated with these kids:

Chojiro Tokumatsu is the Boss, the top duelist of the prison the Lancers, along with Crow and Shinji are sent to. He has been so for 10 years.

He plays with a Cardian Deck, which mirrors hanafuda cards in terms of appearance and play style.

A Duel Chaser that works for Security, who is first shown dueling Yugo and losing his job and is demoted to the Commons. Roget later gives him a second chance, and he returns in the Friendship Cup to duel Yuya, but he loses again. He is given a Goyo Fusion Monster by Roget. Like others in Security, he runs a Goyo Deck.

Sam is a young boy employed by Security and the Executive Council, serving as an attendant to Yuya before his duel with Jack. His only known card is Tuning Magician. 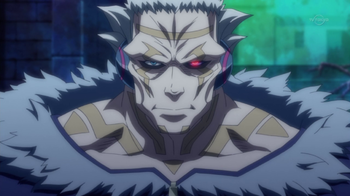 A mysterious figure that works for Roget, and stands behind him in shadow. Sergey was a prisoner recruited from the Underground, known as the Duelist Crusher. Roget outfitted Sergey with some sort of device that allows a measure of control over the hulking brute. He uses Fusion-Synchro hybrid decks, created by Roget to combine summon tactics of both types. 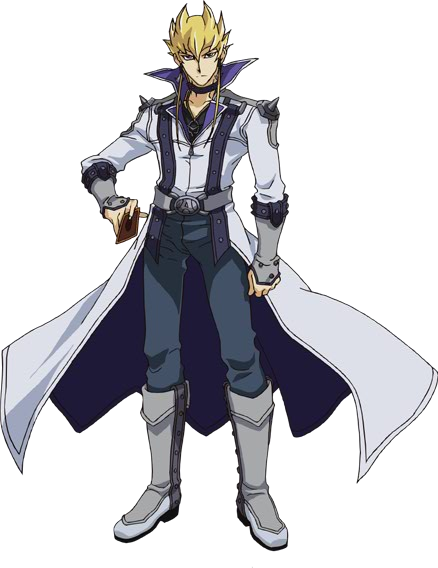 An alternate version of Jack Atlas from Yu-Gi-Oh! 5D's. He was originally a Common, but he won the Friendship Cup and eventually has become the Duel King afterward, climbing up to the Tops and becoming a hero figure for the Commons. He uses a Red deck, which also includes the Resonator archetype.

The head of Security, and the main antagonist for the Synchro Arc. He is later revealed to have come from the Fusion Dimension ten years ago, sent in as a spy to take over City from the inside. However, he soon let the power go to his head and now he wants nothing to do with his home dimension, instead preferring to rule a different place altogether. To that end, Roget will do anything to maintain his seat of power, anything. Roget plays an Antique Gear deck, to drive home that he hailed from Academia and their love for Fusion Monsters.

ARC-V version of Sector Security, that enforce the law. They use Vigilante and Goyo decks, the latter being monsters that can Special Summon the opponents' monsters from the graveyard after destroying them. 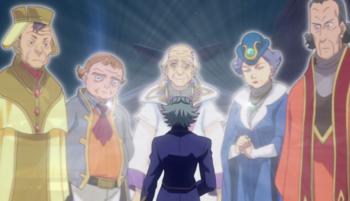 Tropes associated with the Executive Council:

A reporter and duel commentator from the Synchro Dimension.

Gallager is a man that calls himself a promoter for duelists. He is also a "recycler", who controls the Underground Facility and keeps an eye on talented duelists he can bring to Roget.