This page lists the main characters of Yu-Gi-Oh! ARC-V with their respective tropes. The main protagonist is Yuya, but his counterparts in the other dimensions also play a central role in the storyline. 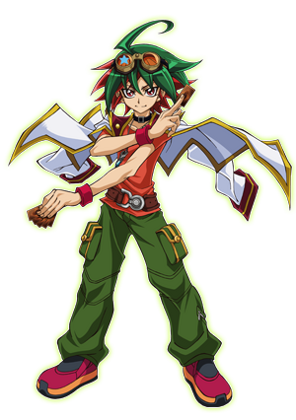 The main protagonist of ARC-V, an eighth-grader who attends You Show Duel School. He aspires to become an Entertainment Duelist and bring laughter to people through his duels like his father did before him, at least before Yusho's mysterious disappearance three years ago.

He owns a good-luck charm pendant his father gave him when he was younger, which mysteriously glows during his televised exhibition match against Strong Ishijima. This unlocks the power of an entirely new Summoning method, Pendulum Summoning, which quickly sets off a chain of events that may go well beyond his control.

He is currently one of the Lancers, however, given Yuya's pacifistic nature, as well as his own personal creed to bring smiles to others as he duels instead of simply defeating his opponent, he doesn't quite fit in, especially when he keeps coming to blows with Reiji's style of command. As time goes on, however, the two gain a mutual respect for one another, with Yuya loudly proclaiming that Reiji is indeed a worthy leader to follow.

He uses a Entermate/Performapal Deck, which features animals in costume that focus on altering the ATK and DEF of monsters; he later starts incorporating the Odd-Eyes archetype. His ace is his Odd-Eyes Pendulum Dragon, one of the Four Heavenly Dragons. Backing them up are his Magicians; his first two enable Yuya's finishing moves, with later Magicians allowing Yuya to Xyz, Synchro and Fusion Summon powerful monsters. Like previous protagonists, Yuya's ace card keeps evolving, and Yuya learns the other Special Summoning methods through evolving his Odd-Eyes.

As the series goes on, Yuya inadvertently absorbs Yuto into his body, gaining access to his Xyz's ace monster, Dark Rebellion Xyz Dragon, giving his deck access to Xyz Summoning and the latter's Phantom Knights. Eventually, Yuya goes on to absorb his other remaining dimensional counterparts into his own body, reviving as his original incarnation, the "Devil Duelist" Zarc. Following Zarc's defeat, Yuya retains the souls of Yuto, Yugo and Yuri, along with their ace monsters, and his deck accommodates their play styles to bring about the Dimensional Dragons' full power by the end of the series. 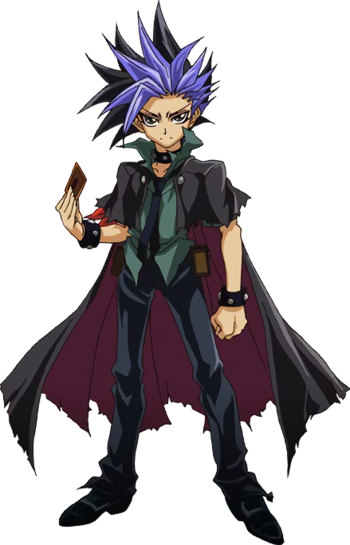 A strange masked man investigating LDS, he intervenes in a duel between Yuzu and Sawatari. For mysterious reasons, he shares the same face as Yuya and he has some connection to Yuzu, who resembles a friend of his named Ruri. It is later revealed that he is the Xyz Dimensional Counterpart to Yuya, due to them sharing the same face.

Yuto used to live in Heartland, a peaceful city that was invaded by Academia, turning it into a war zone. Together with his friends, he's a member of Resistance, a rebel group that fends off Academia soldiers. At some point, when Yuri kidnapped Ruri, Yuto encountered Yugo, who was looking for the kidnapped Rin; both of them mistake each other for the kidnapper and dueled each other until Yugo disappeared. After learning that Reiji Akaba is the Professor's son, Yuto followed his friend Kurosaki travel to Standard, where Yuto meets Yuzu.

He learns that LDS is not associated with Academia, but he decides to follow Yuzu from the shadows to protect her, since she resembles Ruri. Accepting that they are not the same, but relieved that Yuzu is learning Fusion Summoning not for evil, he tells her about his mission. After Sora loses to Kurosaki in the Maiami Championship, Yuto pays him a visit to interrogate him, which eventually leads to his meeting with Yuya. Despite Yuya's initial hostility, Yuto makes peace him and tells him about the existence of the other dimensions. Shortly after that, Yugo appears out of nowhere and they duel each other again, still believing that they are enemies. But once they summon their dragons, they are possessed by their Superpowered Evil Side. While Yuya manages to bring Yuto back to his senses, he fails to do the same with Yugo, resulting that Yuto loses the duel and is greatly injured by Yugo's last attack. Before disappearing into light, Yuto inherits Yuya his Dark Rebellion Dragon Xyz Dragon and his last will: to make everyone smile with his dueling. He is absorbed by Yuya and his spirit resides within him for the majority of the series, acting as mentor and friend to Yuya.

He uses a Phantom Knights deck that focuses on summoning Xyz Monsters, including his Dark Rebellion Xyz Dragon, and makes use of Spell and Trap Cards that can be activated from the graveyard. Like his other counterparts, his ace dragon can "evolve" into a stronger version of itself, Dark Requiem Xyz Dragon.

Eventually, all four boys become one again to form the original entity Zarc. After Zarc's evil is sealed away, Yuto continues to live on in Yuya's body, this time with Yugo and Yuri for company. 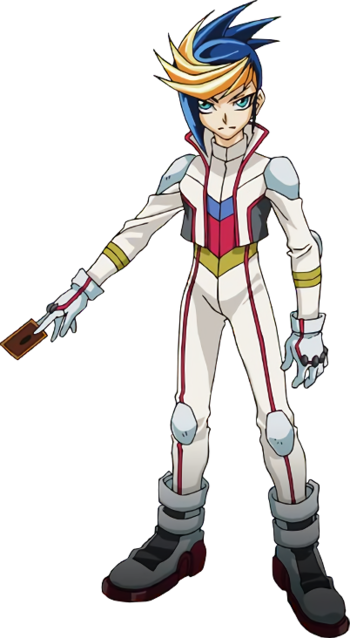 A mysterious Turbo Duelist initially mistaken as an agent of Duel Academy by Yuto. Yugo grew up as a part of the "Commons" in the slums of City, alongside his childhood friend, Rin. Both dreamed of building a D-Wheel of their own and using their dueling skills to participate in the Friendship Cup to escape the hardships of their environment, similar to their hero, Jack Atlas. Sometime before the plot started and the Friendship Cup drew near, Rin was hunted down and captured by Yuri on behalf of Professor Leo Akaba. Despite Yugo's attempted rescue, Yuri escaped with his prize and brought her to Academia. Since then, Yugo has worked everyday to try and reclaim Rin from Academia's clutches while at the same time intending to make her kidnapper, Yuri, pay for his crimes. As a first in the franchise of Yu-Gi-Oh!, he is one of the few male protagonists to show romantic interest in a female protagonist; in his case, it's his childhood friend Rin. Whether or not she reciprocates remains to be seen.

Yugo is the Synchro Dimensional Counterpart to Yuya, Yuto and Yuri due to them sharing the same face. He uses a deck with Speedroids, Wind-Machine Type Monsters that resemble toys or are references to games, primarily those centering on dice. Similar to Joey Wheeler from the original series, Yugo relies on luck as a powerful factor in his duel style and all his monsters lead up to supporting his ace monster, Clear Wing Synchro Dragon and its stronger counterpart, Crystal Wing Synchro Dragon.

Like his Xyz counterpart, Yuto, Yugo is eventually absorbed by Yuri and unwillingly gives him access to his ace monster. Later Yuya absorbs both Yugo and Yuri, with all four boys becoming Zarc again. After Zarc's defeat, he is at peace with living alongside the three other boys, sharing the same body. 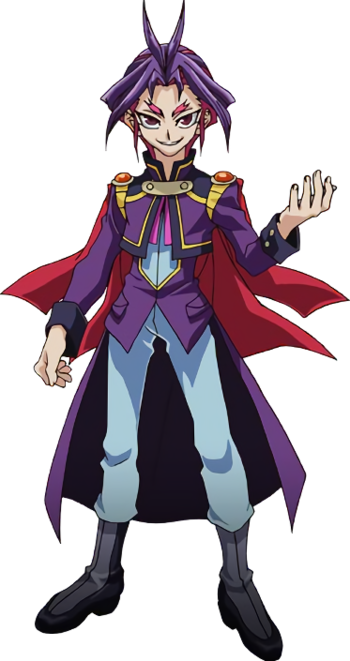 A member of Academia under the direct command of Professor Leo Akaba. Like Yuto and Yugo, he strongly resembles Yuya. Later revealed to be the Fusion Dimensional Counterpart to Yuya, due to them sharing the same face and originally being of one entity, "Zarc". Yuri has captured Ruri and Rin from their respective dimensions on behalf of the Professor and with Serena under their wing, his new task is to capture Yuzu, the fourth and final piece. Cold, cruel and ruthless in his tasks, Yuri is one of the most sadistic characters introduced in the series. He utilizes the Predator Plants, a legion of DARK Plant type monsters that can swarm the field, impairs and ensnares opponents with their effects and sets up ideal conditions for his ace monster, Starve Venom Fusion Dragon. Later episodes show that like his counterparts, his ace dragon can "evolve" into a stronger version of itself, Greedy Venom Fusion Dragon.

In his duel against Asuka, he reveals that he also uses a second deck utilized by special "honor" students of the school, which turns out to be another "Antique Gear" archetype, designed to swarm the field with "Gear" monsters in order to tribute them and power up stronger Antique Gear monsters in their place. However, he later reveals to have modified the deck's original recipe to contain his personal trump card, "Super Polymerization", which fuses any number of monsters on both sides of the field to summon the deck's ace, Antique Gear Ultimate Golem.

Like Yuya, Yuri goes on to absorb one of his dimensional counterparts, Yugo, into his body and gains access to Clear Wing Synchro Dragon. Seeing the power obtained from absorbing just one of his fragments, Yuri then becomes obsessed with absorbing Yuya and Yuto next. However, through a long grueling duel, Yuya reverses the absorption on him instead, thus granting Yuya access to both Clear Wing AND Starve Venom. After all four boys temporarily become Zarc again, Zarc's evil essence is sealed away in an epic duel, resulting in Yuri losing his sadistic tendencies and becoming "normal", content with living inside Yuya.

WARNING - The following profile has all unmarked spoilers for the late episodes of the series. 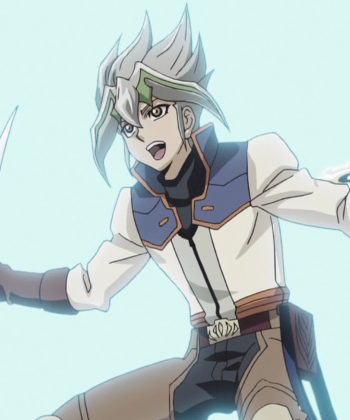 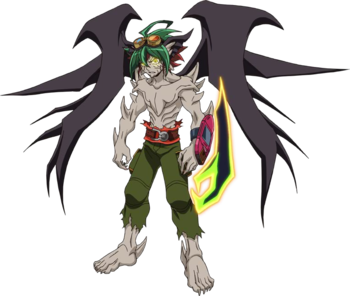 The titular main antagonist of the series, a Duelist from the Original Dimension who is the original form of Yuya Sakaki and his other doppelgangers Yuto, Yugo and Yuri, as well as the original owner of the Four Heavenly Dragons: Odd-Eyes Dragon, Dark Rebellion Xyz Dragon, Clear Wing Synchro Dragon and Starve Venom Fusion Dragon.

Originally a kind person with an innate ability to communicate with monsters, Zarc wished to bring smiles and entertainment to the world at large, similar to Yuya. After he accidentally injured an opponent in a duel, the audience cheered this display and demanded more violent duels to entertain them, which Zarc decided to indulge in. Soon the overwhelming peer pressure from citizens to partake in more violence, combined with Zarc's own deep insecurities about losing, took a drastic toll on his psyche. As Zarc's blood lust eventually reached a fever point, he finally broke and turned his ace monsters against the stadium. With Zarc and his dragons satisfied with the destruction caused, they decided to never feel helpless and "used" by others ever again, fusing themselves together with the power of Astrograph Magician to become a nightmarish creature. Re-naming himself "Supreme King Dragon Zarc", the new abomination boasted that he now had the "powers of a God" and moved to destroy the world itself.

Unfortunately for Zarc, a beautiful duelist by the name of Ray defeated his "god-like" form with the power of nature; the end result being that Zarc's soul and body was split across the four dimensions, reincarnating as Yuya and his counterparts. But ever since that fateful day, remnants of Zarc's essence in each of his incarnations have been desperately trying to get all four boys to join together again, bringing about his revival. Eventually, he succeeds and revives himself with Yuya as his base body, ready to bring ruin across the Dimensions once again.

Despite his overwhelming powers, Zarc is eventually taken down by the combined efforts of Ray, Reira, Edo, Kaito, Jack and the rest of the Lancers, with his "fragment" Yuya proving pivotal in bringing about Zarc's second downfall. While promising to return a third time, Zarc is denied that chance when soul is sealed away into Reira's body. Through a series of future events, Yuya is finally able to make Reira smile with his dueling and, by extension, restore Zarc's faith in humanity and pacify his soul, thus ensuring that his inner evil will never threaten the dimensions ever again.