Voiced by: Kath Soucie (female smuggler), Maury Sterling (male smuggler)
"It's a dangerous galaxy. Freighter captains are a dime a dozen, but when the Republic needs someone who can get the job done, they always call me. I've got the connections, the talent, and the best starship there is."

An unaffiliated smuggler contracted to bring a shipment of weapons to the embattled Republic forces on Ord Mantell, things get off to a rocky start when the Smuggler's ship is stolen by a Separatist, starting a chain of events that take the Smuggler deep into the conflict with the Empire. 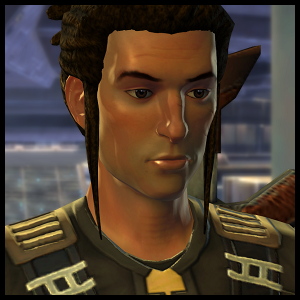 Voiced by: Troy Hall
"Now you're dumb, ugly, and dead!"

Corso Riggs is a cheerful, disarmingly optimistic mercenary soldier. Raised as a rancher's son on the rough frontier of Ord Mantell, Corso developed a mixture of naive innocence and primitive toughness, wrapped with old-fashioned chivalry.

In addition to his gung-ho enjoyment of a good, dirty fight and his encyclopedic knowledge of weapons, Corso remains a ray of sunshine in even the worst circumstances. He has no sense of his own mortality and is absolutely convinced that he's going to live forever. Corso also has a soft spot for damsels in distress, even when they clear they're no up to no good.

He's also a potential love interest for the female smuggler. Originally, he was the Smuggler's ranged tank companion. 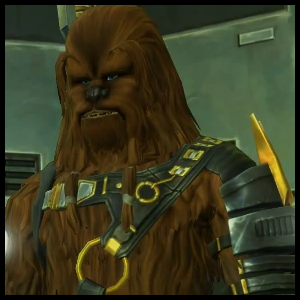 The mighty Wookiee gladiator named Bowdaar has spent over a century facing countless opponents without ever losing a match. He solidified his title as the galaxy's greatest gladiator when he defeated notorious Wookiee-hunter Karssk on Ord Mantell. The more gullible underworld scum whisper that Bowdaar is an immortal creature who can't be killed, but those who have faced him and lived know that he is simply the best there is.

On the surface, Bowdaar may seem like a simple-minded brute, but nothing could be further from the truth. Case in point: Bowdaar eventually discovered the identity of the Trandoshans who first captured and enslaved him. One night in an arena on Loovria, Bowdaar learned that his former captors were sitting in the stands. An unfortunate "weapons malfunction" caused the drunken Trandoshan slavers to meet an untimely—and extremely messy—end.

Bowdaar is the second companion to be acquired, on Nar Shaddaa. Originally, he was the Smuggler's melee tank companion. 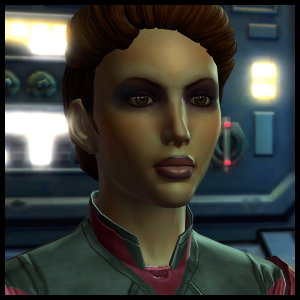 The daughter of a vicious crimelord and also heir to a planet's throne, Risha is a fundamentally good person hardened by years of seeing and enduring the ugliest parts of the galaxy. Bitingly sarcastic and often selfish, Risha nevertheless joins the Smuggler at the end of Act One. Romance option for male Smugglers. Originally, she was the class's ranged damage companion. 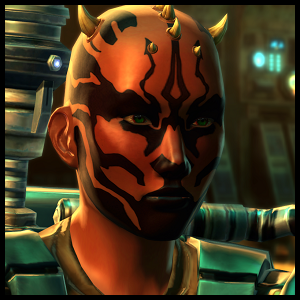 Akaavi Spar was born into a respected Mandalorian clan and became one of its finest warriors. She killed her first foe—an abusive Abyssin mercenary—at the age of eight using an improvised flamethrower. This victory earned her the nickname "firehand" among her clan and marked the beginning of an impressive career as an Imperial bounty hunter. Akaavi captured and killed all manner of targets in her youth, from career criminals to Jedi.

When her entire clan was framed for crimes against the Empire and executed, Akaavi alone survived the brutal purge—but her outlook on the galaxy changed forever. With no connection to her Mandalorian heritage, she became a wandering mercenary loyal to no one.

Romance option for male Smugglers. Originally, she was the Smuggler's melee damage companion. 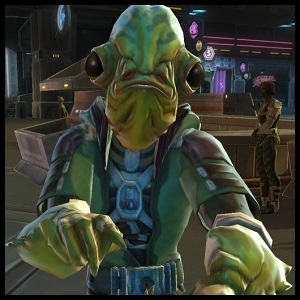 Voiced by: Gary Schwartz
"I heal you with my Jedi powers!"

A male Mon Calamari who joins the Smuggler on Hoth, Languss Tuno is a failed Jedi Padawan who abandoned the Order but still uses his limited knowledge of the Force and a stolen lightsaber to dupe the gullible while pursuing a life of leisure and hedonism. Originally, he is the Smuggler's healer companion. 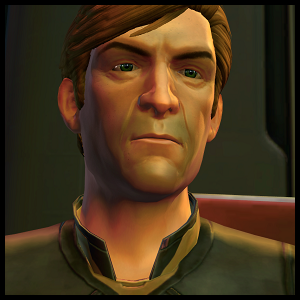 Inveterate gambler and unrepentant ladies' man Darmas Pollaran is an information broker operating out of Coruscant's old Galactic Market cantina. If something important is happening in the Republic capital's chaotic criminal underworld, Darmas either knows about it or can find someone who does. His network of informants and confidantes extends to Coruscant's meanest, roughest and deepest levels.

Darmas charges a high premium for his data and contacts, supplementing that sizable income with his impressive winning streak gambling at the card game known as sabacc. Although more than one poor loser has quietly accused Darmas of cheating behind his back, no one would dare make such an accusation to his face. Darmas doesn't take insults to his gentlemanliness lightly—and he has the blaster-handle notches to prove it.

The man known as Darmas Pollaran is an elaborate fiction—a cover identity crafted by one of Imperial Intelligence's most successful infiltrators. Every woman romanced, every hand of sabacc played and every scrap of information gathered has all been in service to the Sith Empire. He is fiercely loyal to the brutal oppressors he so faithfully serves.

Darmas despises everything about the Republic, but reserves special hatred for its criminal denizens. Now that his true identity is revealed, certain past calamities within the galactic underworld—like the rise and fall of the Migrant Merchants' Guild on Coruscant—must be viewed in a new light. It is almost certain Darmas had a direct hand in these events. 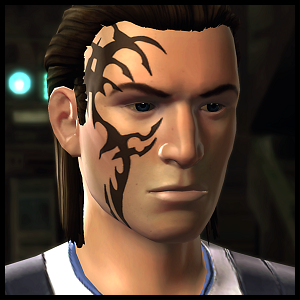 The smuggler's nemesis for the first act and Jerkass extraordinaire. He steals the smuggler's ship at the very beginning of the game and gets you in trouble with all sorts of unsavory types. He's after Nok Drayen's legendary lost riches, just like our hero. 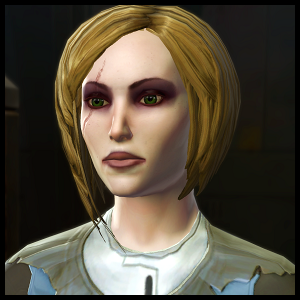 A former acquaintance, business partner, and...frienemy?...of Risha's. She helps you on Taris; depending on how that goes, you can help her out on Quesh. In Shadow of Revan, she comes to you on Rishi with a Zany Scheme. 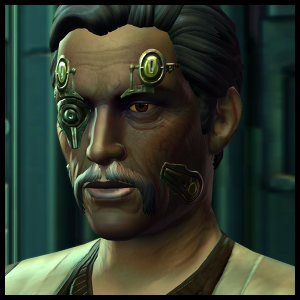 The greatest pirate lord of the galaxy, the hunt for Drayen's treasure makes up the entirety of Act I. 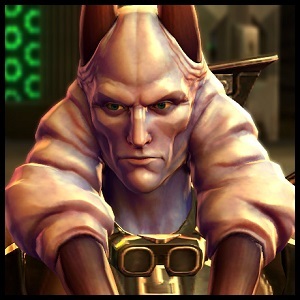 A crimelord who serves as a recurring foe throughout the storyline after the Smuggler botches a shipment of guns in the prologue.

A Republic Marshall, Kay Cavarat is stationed on Belsavis prison. 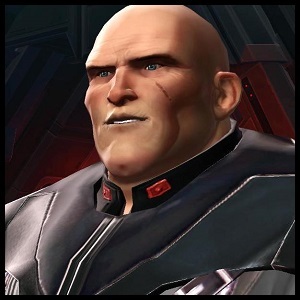 The nemesis of the smuggler in Act III, the Voidwolf was a slaver and Imperial privateer who was made a Grand Admiral in the Imperial Navy after personally capturing a ship full of Force-sensitive children and killing their Jedi defenders. His experience in the underworld made him an effective dirty fighter, but his "low tactics" made him unpopular with the aristocratic officer corps of the Imperial military. 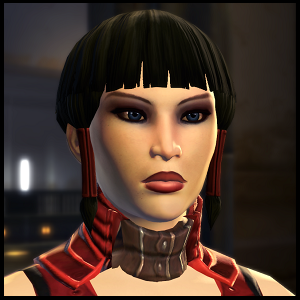 A Sith the Smuggler encounters on Tatooine during Chapter 1. Vaverone is searching for an ancient holocron and tries to enlist the Smuggler's assistance in recovering it from Diago Hixan. Depending on the Smuggler's choices their encounter might be amicable or deadly. 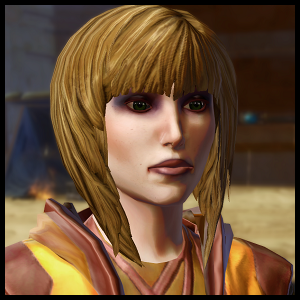 A young Jedi Knight who travels to Tatooine in pursuit of Sith Lord Vaverone Zare. During her mission, she encounters the Smuggler and senses that he is destined for great things. 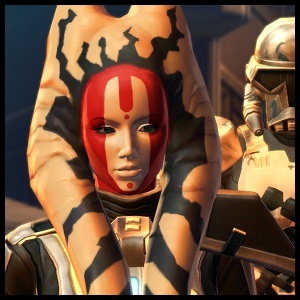 A friend of Risha's who later joined the Jedi and attained the rank of Master. She's a bit more subtle and clever, and less formal, than other Jedi, as one might expect from someone who got on well with Risha. She asks the Smuggler for help rescuing an old friend, then helps the Smuggler out in Chapter 3, particularly on Corellia