This page is for listing the tropes related to non player characters in non-Council space who first appeared in the second Mass Effect game. 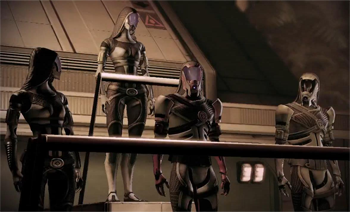 Keelah se'lai.
"This Conclave is brought to order..."

The current members that govern the quarian Migrant Fleet, composed of Rael'Zorah, Shala'Raan vas Tonbay, Han'Gerrel vas Neema, Zaal'Koris vas Qwib Qwib, and Daro'Xen vas Moreh. They play major roles during Tali's loyalty mission, being the judges in her trial and each member has a unique outlook on the geth/quarian conflict.

They return in Mass Effect 3, leading a massive Migrant Fleet strike on the heart of geth territory at Rannoch, the quarian homeworld.

The Admiralty in general 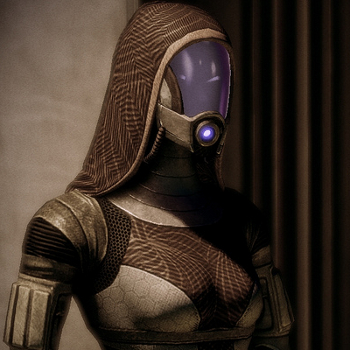 I am not giving you my opinion; I am merely telling you which way the wind is blowing.

"I was there when Tali was born; her mother and I had synced our suits so we could be in the same open-air room. I was sick for a week, but it was worth it."
Voiced by: Shohreh Aghdashloo

A close friend of Tali's mother, and flag officer of the Patrol Fleet. Her arm of the flotilla is responsible for picket lines, scouting, and extra-fleet escort duties. Stuck with the fairly thankless task of keeping the other admirals in line, she is sadly aware of the limits of her position and doesn't feel she can do much to change public opinion. If Tali dies in the Suicide Mission, Raan fills her place on Rannoch. 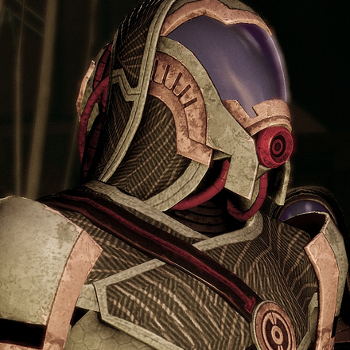 Once you build the galaxy's biggest hammer, someone will always start looking for nails.

"They are our children, Shepard. We have all done horrible things to each other, but it has to end — for both groups."
Voiced by: Martin Jarvis

An outspoken opponent of homeworld invasion plans, supporter of geth peace endeavours, and commander of the Civilian Fleet. He's responsible for the well-being of the majority of the fleet's ship numbers. 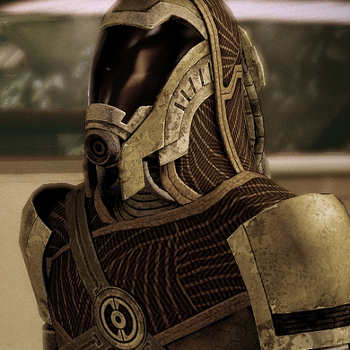 "Blow up some geth on the way."
Voiced by: Simon Templeman

Admiral of the Heavy Fleet, and a warhawk through and through. He's also a childhood friend of Tali's father. His fleet is the main military force of the Flotilla. 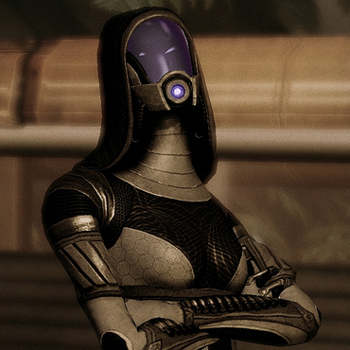 Many things are impossible until they are done.

"Rael should have felt no more guilt experimenting on geth than I did while performing surgery on a childhood toy!"
Voiced by: Claudia Black

An eccentric but brilliant researcher, Admiral Xen is responsible for various research vessels in the fleet. Though her arm of the fleet is small, they play a critical role in technical advancement. She does not regard the geth as alive, but as malfunctioning machines. 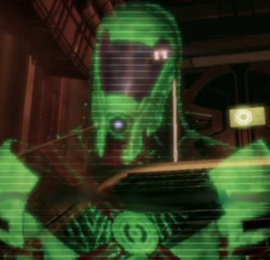 "I promised to build my daughter a house on the homeworld..."

Tali's father. Somewhat distant to Tali due to the burden of being an admiral, he just wanted to build a house for his family on the homeworld. 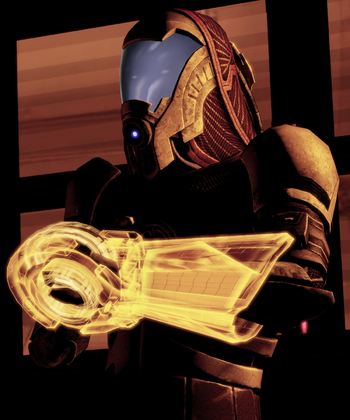 Monsters coming back. Mechs will protect. Safe from Swarms. Have to hide!

A shy, neurotic quarian with a history of anxiety, currently spending his pilgrimage on Freedom's Progress, a human colony that is attacked by the Collectors. While left alive and unharmed due to the Collectors being unable to recognize his biological signature, having to witness the "monsters" and "swarms" take everyone away is enough to traumatize the poor adolescent beyond rational capacity. 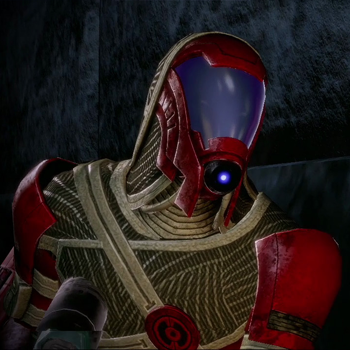 Can't really comment on that, ma'am. I just shoot things.
"The geth might get me, but I'm not gonna die from an infection in the middle of a battle. That's just insulting!"
Voiced by: Adam Baldwin

One of a squad of Migrant Fleet Marines assigned to protect Tali on their mission to Haestrom. He's also the only one still alive by the time you get there, and whether he lives to see the fleet again depends on you. 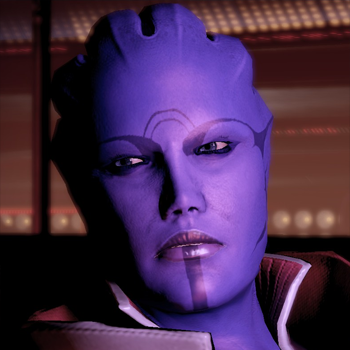 I am Omega.
"Don't. Fuck. With Aria."
Voiced by: Carrie-Anne Moss

The closest thing Omega has to a rulernote Queen, if you're feeling dramatic, Aria and her forces maintain what passes for order on the station. 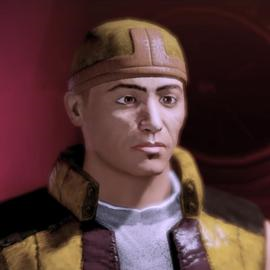 "I grew up on Omega, I know how to use a gun!
Voiced by: Josh Dean

A young, overenthusiastic wannabe mercenary on Omega. He tries to sign up as a freelancer to go after Archangel, but it's immediately clear that he's got no clue what he's doing. A Paragon interrupt allows you to prevent him from getting his head blown off, and he'll later thank Shepard for preventing him from signing up. 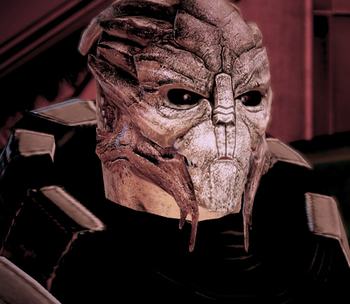 "Vorcha? Plan? Ha ha ha! They're a pestilence, nothing more. If they started planning, we'd all be in big trouble."
Voiced by: Gideon Emery

A turian enforcer in Aria's organization tasked with keeping the vorcha in check on Omega. 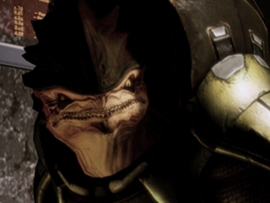 "I will inflict upon the genophage the worst insult an enemy can suffer: to be ignored."
Voiced by: Dave Fennoy

A krogan warlord and scientist, Okeer was working on creating the ultimate krogan soldier to use against his personal enemies. In his lab on Korlus, he worked alongside a Blue Suns group led by Jedore, who wanted a krogan army.

However, by the time Shepard arrives to recruit him for the team, Okeer is betrayed by Jedore and killed when his lab is gassed. He lives just long enough, though, to make the final preparations for his ultimate soldier: Grunt. 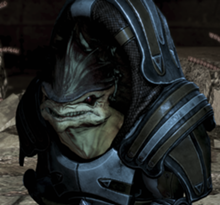 Wrex's brood-brother, and the more traditional of the two. Wreav appears in both 2 and 3 as krogan leader if Wrex was not recruited or killed on Virmire. Otherwise, he only briefly appears in 3 as a very reluctant follower of Wrex. 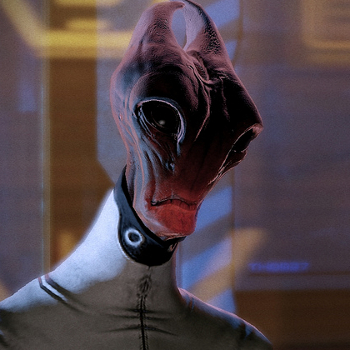 Nothing I do will ever be justified!
"For such a smart man, Professor, you always had trouble seeing evidence that disagreed with your preconceptions."
Voiced by: Fred Tatasciore

A salarian geneticist, former member of the salarian STG and student of Mordin Solus. Unfortunately, he ends up getting captured by a krogan clan, Weyrloc, who are attempting to reverse the effect of the genophage. 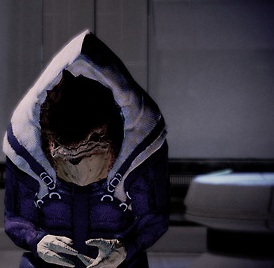 A random krogan reciting poetry to try and impress his asari girlfriend, Ereba

. In Mass Effect 3 he's a scout looking into the rachni relay. 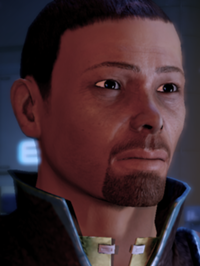 An old friend of Miranda's who helps her rescue Oriana from her father on her loyalty mission. 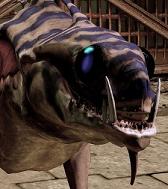 A prize-fighting varren on Tuchanka. Urz will follow the player around in the area he is located in after being fed, Urz will even take part in the pit-fights run by the krogan. 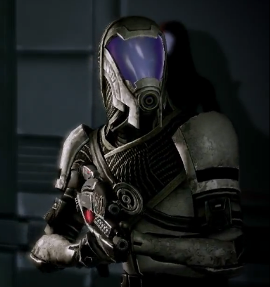 A member of a Tali's squad on Freedom's Progress. He's openly hostile to Shepard and company when they arrive due to quarian animosity towards Cerberus. Despite Tali's best efforts, Prazza's actions lead to his death as well as the demise of most of his squad over the distrust. 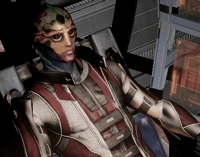 I am...was...an information trader. Not a slaver.
Voiced by: Yuri Lowenthal

A drell information trafficker who teams up with Liara in the Redemption comic. Cerberus recruits them both to retrieve Shepard's corpse from the Shadow Broker, who turns out to be Feron's employer. Feron balks at the Broker's deal with the Collectors and helps Liara, only to be captured and tortured as an example to the Broker's other followers. In the Lair of the Shadow Broker DLC, Shepard and Liara bust him out. 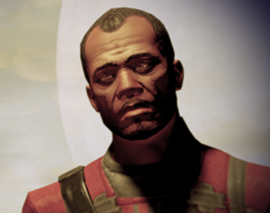 Jacob's long-lost father, the First Officer of the MSV Hugo Gernsback. He and the ship disappeared years ago, but Jacob has received information on its location. 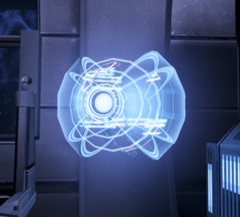 A specialized V.I. made to assist the Shadow Broker. Catalogues and organizes the vast quantities of information gathered by the Shadow Broker network. Originally didn't have a name, just being known as "Info Drone", it's eventually named Glyph.