This page is for listing the tropes related to Non-Player Characters in Mass Effect: Andromeda that are part of the Andromeda Initiative, including the Nexus and any colonies. 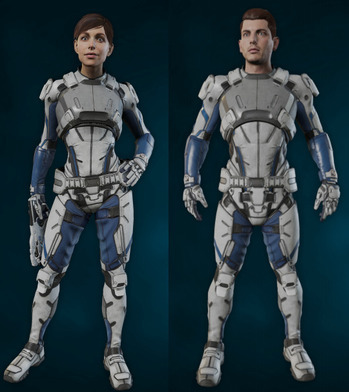 The opposite-sex twin of Pathfinder Ryder and the Player Character the player did not choose at the start of the game, Scott/Sara travels to Andromeda alongside their sibling and father. Born in 2163, Scott joined the Alliance military and was stationed at an outpost near Arcturus Station prior to joining the Andromeda initiative. Sara, also prior to joining the Initiative, served as a support to researchers at the Prothean ruins on Mars. 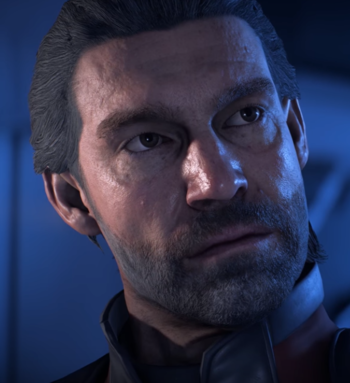 Alec Ryder is the father of the Ryder twins. Notable as both one of the original explorers to go beyond the Charon Relay with Jon Grissom and an N7 operative, Alec was originally designated as humanity's Pathfinder for the Andromeda Initiative.

Dr. Ellen Ryder
Ellen Ryder (nee Harlow) was Scott and Sara's mother, and Alec's late wife. She was a prominent researcher of eezo, and made some of the first human biotic implants. Her implants were later adapted to house the SAMs that all of the Pathfinder use. This research gave her a terminal disease, and she died a few years before the game starts. 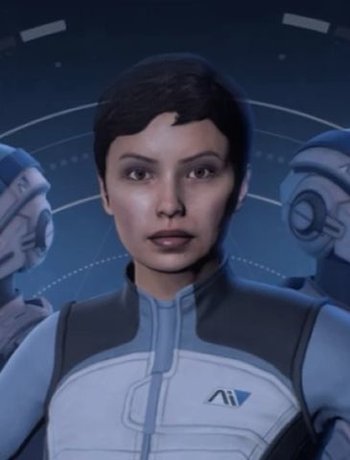 The mysterious founder of the Andromeda Initiative, who travelled to Andromeda aboard the Nexus, ahead of the Ark ships. 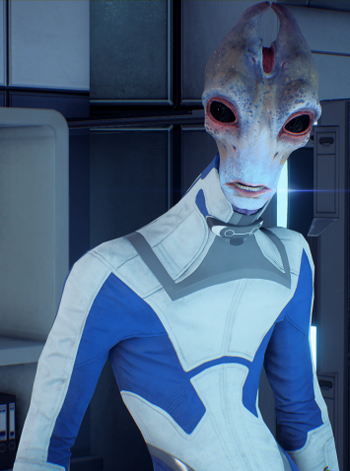 An egotistical salarian politician who was the Deputy Assistant of Revenue Management for the Nexus. Currently the acting Director of the Andromeda Project. 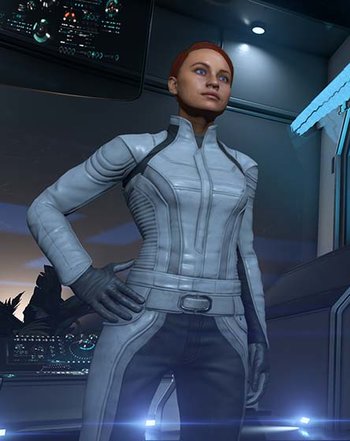 The human Director of Colonial Affairs for the Andromeda Initiative. Foster is tasked with overseeing all colonization logistics for the Initiative, and the settling of the Andromeda galaxy, making sure that all their settlements are up and running and that colonists have a place to live. 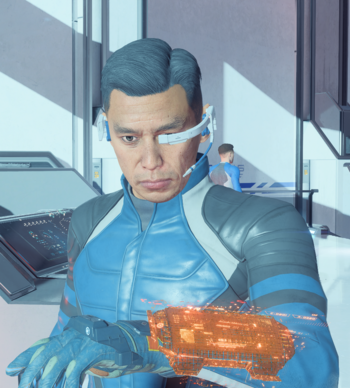 The Assistant Director of Colonial Affairs. Drack suspects that Spender played a part in the Nexus uprising but cannot prove it, and asks Ryder to help him find proof. 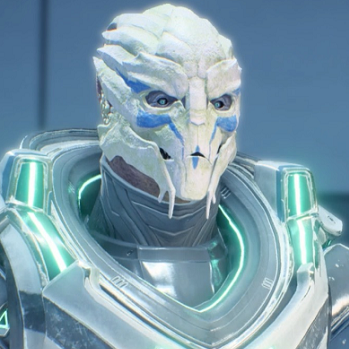 A turian who serves as the head of the combat forces and the commanding officer for multiplayer strike missions. Following the exile of the rebels he is the head of security for the Nexus. He is the cousin of Nyreen Kandros from Mass Effect 3's Omega DLC. He is also the protagonist of the comic book, Mass Effect: Discovery. 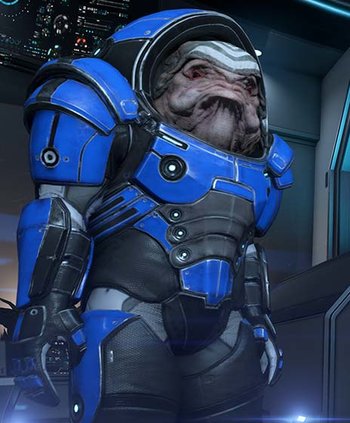 A female krogan engineer who serves as the Nexus Superintendent for the Andromeda Initiative. She oversees construction and engineering aboard the Nexus. She's also the granddaughter of Nakmor Drack.

An asari journalist tasked by Tann to create a documentary on the Andromeda Initiative. She is a romance option for a Ryder of either gender.

Vetra's kid sister, currently working in Operations on the Nexus. 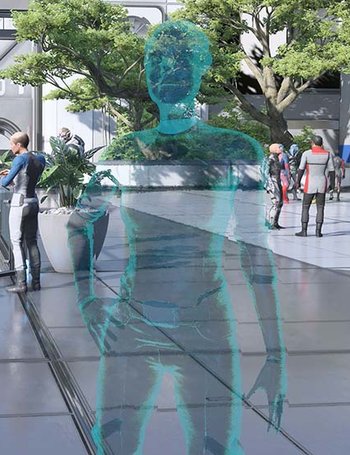 The virtual intelligence tour guide first encountered aboard the Citadel in the Original Trilogy. Avina is installed aboard the Nexus as part of the Andromeda Initiative and can be accessed on terminals throughout the ship. As with her Milky Way counterpart, the virtual intelligence is designed to answer questions and provide guidance and insight on current events. With a limited capacity for discourse, Avina is more suited to offering information rather than opinions.

An anti-AI activist who first comes to Ryder's attention when they try to cripple SAM and sever their connection.

Nexus Science Team
The head research team on the Nexus. They are Suvi's coworkers who transferred her onto the Nexus. Includes the asari Doctor Aridana, the salarian Professor Henrik, and the turian Chief Lucan. Other scientists get shipped to Havarl to study the amazing cell mutations there.
Nilken Rensus
A turian from the Nexus, and one of the colonists from the failed Eos sites. Labelled the first murderer in Andromeda, whose innocence Ryder has to prove.

A male human doctor who worked on the Hyperion and part of Alec Ryder's Pathfinder team.

Second Wave Specialists
A trio of humans from the Hyperion, woken up at the beginning of the second wave of colonization. Consists of Iora Pilay, Hunter Kerry and Darla vas Hyperion.

An ex-Spectre, and the second-in-command for the Turian Pathfinder team. Finds Ryder on Havarl while being under attack by Roekaar fanatics.

Captain Elonis Atandra
The asari captain of Ark Leusinia.
Pathfinder Ishara
The original asari pathfinder, Matriarch Ishara is a highly respected diplomat. She was killed in a kett assault when the Valiant attacked Ark Leusinia.
Pathfinder Sarissa Theris
The asari pathfinder. Sarissa Theris is Matriarch Ishara's tiamnanote akin to a bodyguard and successor, who stole a kett module that contained a wealth of tactical data when the Valiant attacked Ark Leusinia.
Vederia Damali
An inexperienced asari huntress encountered aboard Ark Leusinia. She helps you fight off the kett and conduct repairs on the ship in order to escape the Valiant. She is also next in the asari Pathfinder line of succession.

Major Saelen Varn
A "retired" Special Tasks Group officer from the salarian ark. He contacts Ryder after the ark is rescued, believing that salarians aboard the ark had sold out to the kett to allow their species capture.

An ex-Alliance lieutenant and mayor of the outpost of Prodromos.

Chief Grace Lito
Chief engineer of Promise and Resilience, Grace Lito was the only person to survive the destruction of both outposts. She can move into Prodromos at Ryder's request.
Danny Messier
One of the settlers on Prodromos, with possibly the worst luck in Andromeda.

Mayor Priya Blake
The mayor of the Voeld colony. A former Alliance officer.

Mayor Christmas Tate
The snarky mayor of the Ditaeon outpost on Kadara. Definitely not to be confused with Christmas Jones.

Mayor Kariste Archana
An asari mayor of the Initiative part of New Tuchanka.