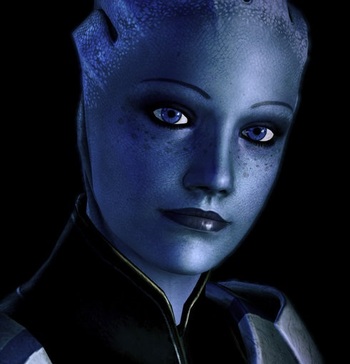 Give me ten minutes and I can start a war.

"You were marked by the beacon on Eden Prime — you were touched by working Prothean technology. That is why I find you so fascinating."
Voiced by: Ali Hillis

An asari scientist, an expert on the Protheans, and a powerful biotic with powers that can only be matched by an Adept Shepard. Joins Shepard's team after being attacked by the geth. One of three characters who can join your party in all three games, being permanent in 1 and 3, and available in 2 via DLC. She is a romance option for a Shepard of either gender in both Mass Effect and Mass Effect 3. She is also the only trilogy character to be voiced in Mass Effect: Andromeda.