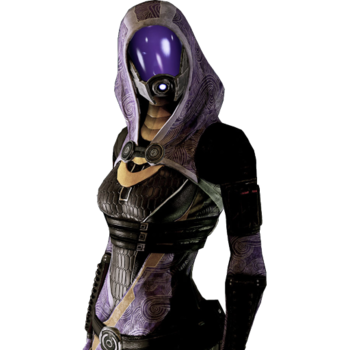 I have a shotgun.

"Our Pilgrimage proves we are willing to give of ourselves for the greater good. What does it say about me if I turn my back on this?"
Voiced by: Ash Sroka (credited as Liz Sroka in 1 and 2)

A quarian machinist who specializes in technology or resources valuable to the Migrant Fleet. She is double-crossed during a meeting but is rescued by the timely arrival of Shepard, who sought information Tali obtained on Saren. Tali joins the Commander out of gratitude and to help bring down Saren. She becomes one of Shepard's closest friends, being one of only two people to be a party member in all three games (DLC pushes this count up to three). In Mass Effect 2, she becomes a romance option for a male Shepard.