This page is for listing the tropes related to party members who first appeared in the original Mass Effect game. 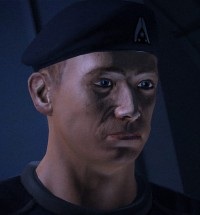 With a name like that, surely he'll be around forever. Right?

"We've got a Spectre on board! That's why I'm so wound up - I can't wait for the real mission to start."
Voiced by: Josh Dean

An over-enthusiastic Alliance soldier from Eden Prime, he is assigned as part of your squad when everything goes to hell there. Continuing in the long Bioware tradition of early sacrificial party members, he dies in the opening few minutes.