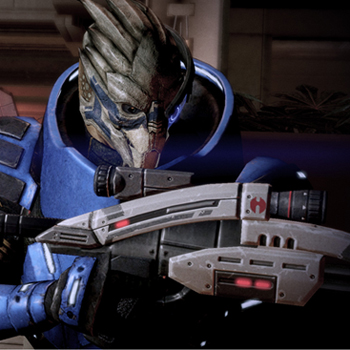 Can it wait for a bit? I'm in the middle of some calibrations.

"Fighting a rogue Spectre with countless lives at stake and no regulations to get in the way? I'd say that beats C-Sec."
Voiced by: Brandon Keener

A turian C-Sec officer who joins Shepard's team after becoming dissatisfied with regulations at C-Sec. Specializes in technology and long-range combat. He becomes one of Shepard's most trusted and loyal comrades, being one of only two squadmates to be available in all three Mass Effect titles as a core squadmate, not counting DLC. In Mass Effect 2, he becomes a romance option for a female Shepard (provided he was recruited in the first game).