This page refers to party members who are recruited in unique ways, and can potentially not even be found depending on player actions. 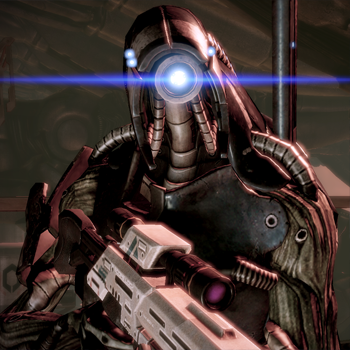 Organics fear us. We wish to understand, not incite.
"Having Legion around is just begging for a rifle up your ass. Without the sweet talk."
—Joker's description
Voiced by: D.C. Douglas

1,183 geth runtimes, operating on a special-purpose geth mobile platform, who are hunting for Shepard, complete with integrating a chunk of its armor into its/his/theirnote Legion uses "we," while the Mass Effect Wiki prefers "it." The characters will refer to Legion as "it" or "he".

Legion is found during the Reaper IFF mission, but can remain unactivated for the duration of the game- much like Grunt, turning him on is directly tied to player choice. 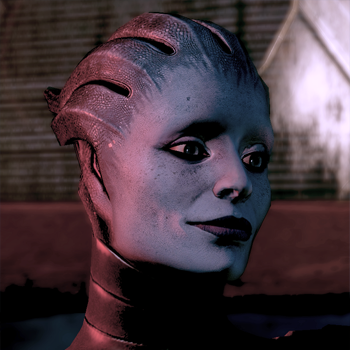 I am the genetic destiny of the asari!
"I was worried you were gonna dump Samara for some crazy soul-sucker with a death fetish. All lithe and sexy and... never mind."
— Joker, post-Samara's loyalty mission
Voiced by: Natalia Cigliuti

An asari serial killer that Samara is hunting. She is actually Samara's daughter. You can choose to kill Samara during the climax of her quest, and by doing so you can have Morinth join you instead of her mother. The "Lair of the Shadow Broker" DLC reveals that her real name is Mirala.

Morinth can only be obtained by doing Samara's loyalty mission. At the end of it, you have to choose between the two.