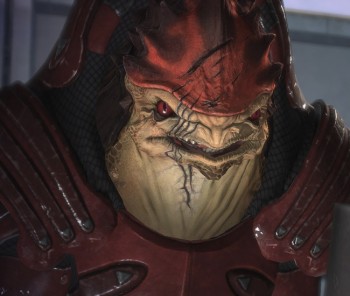 "Anyone who fights us is either stupid or on Saren's payroll. Killing the latter is business. Killing the former is a favor to the universe."
Voiced by: Steven Barr

A krogan battlemaster who combines close-combat skills and enormous physical strength and durability with biotic powers. Joins Shepard's team out of both an interest in fighting a good battle and because the money is nice. He becomes a progressive-minded overlord of the krogan people in Mass Effect 2 if he survived the events of the first game, eventually uniting them under his banner.