This page is for listing the tropes related to secondary antagonists who first appeared in the second Mass Effect game. Some spoilers will be unmarked. 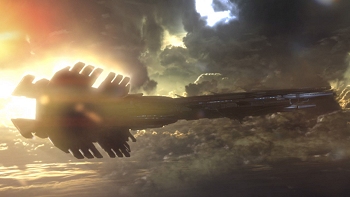 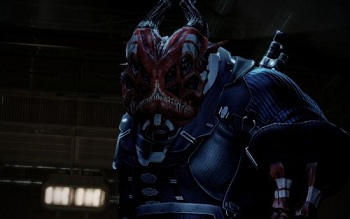 to see the Shadow Broker himself.
"I know your every secret, while you fumble in the dark."
Voiced by: Steve Blum

A powerful figure in the galaxy's black market who specializes in finding secret information and selling it to the highest bidder. In the first game, they hired Wrex to assassinate a former agent who betrayed them. 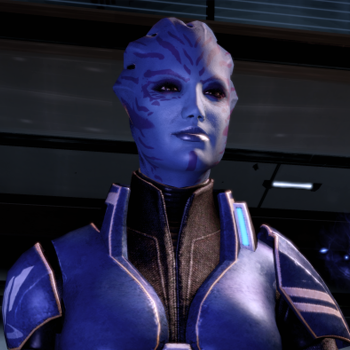 Ilium is just Omega with expensive shoes.
"Now I'll show you what a REAL Spectre can do!"
Voiced by: Jessica Anne Bogart 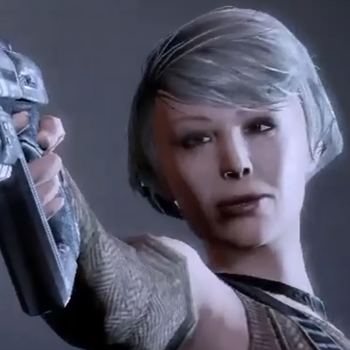 They're coming.
"Only a small fraction of the mass effect relays date back 50,000 years. The majority are far older, indicating they were created by a species predating even the Protheans."
Voiced by: Victoria Gay

An old friend of Admiral Hackett, Dr. Kenson sent a shockwave through the galactic community by publishing research that proved the Mass Relays predated the Prothean civilization. She's later incarcerated by the batarians who claim they stopped her from committing terrorist acts.

Advertisement:
Donovan Hock
Donovan Hock
"May there always be a market for the things we do."'
Voiced by: John Ullyatt

An arms dealer, smuggler, and art collector residing on Bekenstein. Kasumi Goto and her partner Keiji Okuda once attempted to steal from him, which ended with Hock killing Keiji and stealing his graybox. Since then, Kasumi has made it her mission to take it back from him. 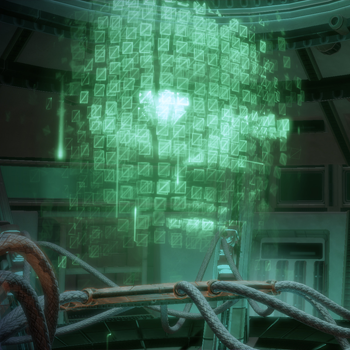 QUIET PLEASE MAKE IT STOP!
It all seemed harmless...
Voiced by: Jesse Gervais

"Project Overlord" is a Cerberus program whose goal is to control the geth by uploading a person's mind into a VI, creating a "virus with a face" that can exploit their religious impulses. David Archer, the project director's brother, volunteered for the procedure — unfortunately, the VI immediately went haywire and is now on a rampage to escape.

The Blue Suns are a corporation of Private Military Contractors founded by Vido Santiago and Zaeed Massani. Known for their ruthlessness and efficiency, they possess innumerable resources, and are in control of many planets in the Terminus systems.

The Blue Suns are a human dominated organization, however turians and batarians both also make up large parts of the group. Unlike the Eclipse, all races serve in all roles, from grunts to elite troops to commanders.

The Blue Suns in general 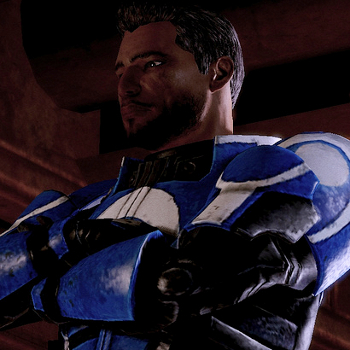 "Actually, take your shot. Give me a reason to put you down like the mad dog you are. Again."
Voiced By: Richard Green

The CEO of the Blue Suns and Zaeed's rival. He, along with Zaeed, were the founding members of the Blue Suns. However, years later, Vido betrayed Zaeed, shot him in the face, and left him for dead, leaving Vido the sole controller of the most powerful N.G.O. Superpower in the Terminus systems. Zaeed still searches for him to this day. 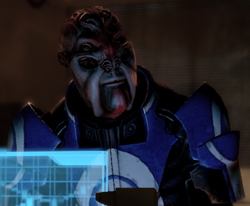 "Maybe you'll solve my problem for me."
Voiced by: Dave Fennoy

The leader of the Blue Suns on Omega, Tarak is encountered during the mission to recruit Archangel. Fed up with losing men and shipments to the persistent vigilante, he convinced the other merc groups to work with him to end their mutual enemy.

He and Zaeed also have a bit of history. 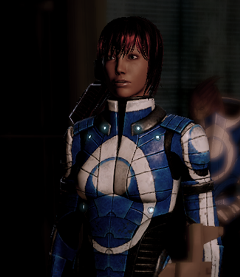 "You have to watch out for the other merc groups. They're almost as bad as Archangel."
Voiced by: Cindy Robinson

A Blue Suns Commander, and Tarak's second in command on Omega. 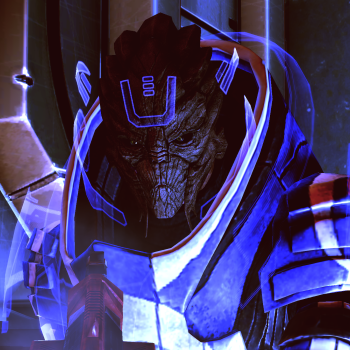 Our facility is more than secure enough to handle three armed guests.
"Nothing goes wrong here."
Voiced by: Fred Tatasciore

The captain of the Purgatory, a Prison Ship run by the Blue Suns that takes the kind of criminals no-one wants anywhere on their planet. He claims to be doing this "for the good of the galaxy", but regularly has prisoners beaten or spaced as an example to others, and much of his funding comes from selling inmates to people looking for payback. Cerberus arranges for Shepard to buy Jack from him, but it turns out his eyes are bigger than his stomach. 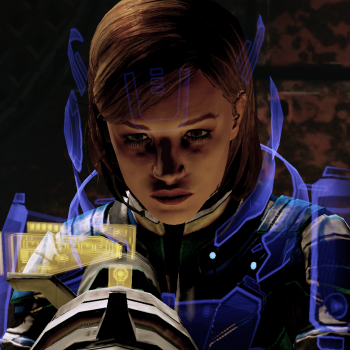 "Being hired is merely the beginning. You must earn your place in the mighty army we are building."
Voiced by: Stephanie Wolfe

A Blue Suns commander encountered on Korlus. She is the financial contributor and overseer to Warlord Okeer's krogan cloning project.

Originally, the Blood Pack were just one of the vorcha mafia, but krogans took over the gang and subverted it to their own cause, turning them into a legion of mercenaries founded by a krogan battlemaster exiled from Tuchanka for striking a female in anger. The group operates in the Terminus Systems, and members are fought throughout Mass Effect 2 on places like Omega, Tuchanka and Pragia. While Eclipse are weighted towards tech/biotics and the Blue Suns toward straight up soldiers, the Blood Pack are more likely to sic varren on you or shove a flamethrower in your face.

Their hiring practices are somewhat narrower than the other two groups — they consist exclusively of krogan and vorcha. The latter make up the bulk of their ground forces but are treated with no greater respect than their attack varren; they're kidnapped and beaten into submission more often than they are "recruited." As of 3, the Blood Pack are mostly vorcha due to krogan having other priorities.

The Blood Pack in general 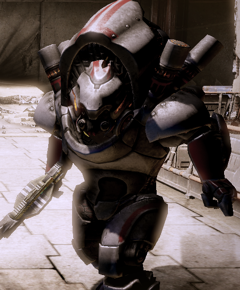 The leader of Clan Weyrloc and the head of the Blood Pack on Tuchanka. 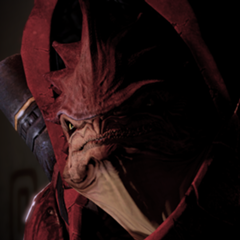 Shepard: (Grunt)'s a valuable part of my crew. What else does he need to know?
Garm: How to live and die without fear. (shoots a vorcha underling) How to put that fear in the hearts of your enemies.
Voiced by: Peter Giles

A krogan battlemaster that leads the Blood Pack on Omega. He teams up with the Eclipse and Blue Suns leaders on Omega in order to kill Archangel. 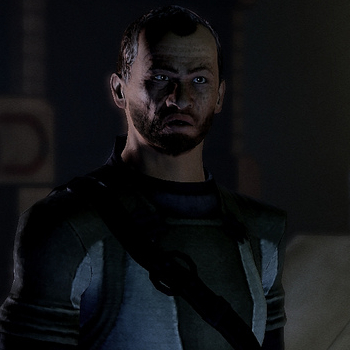 "They did such horrible things to us. They must have had good reasons."
Voiced by: Fred Tatasciore

A human biotic who was a test subject at the Teltin facility on Pragia. Aside from Jack, he was the only survivor of the mass breakout. He tries to restart the facility during Mass Effect 2, with the help of the Blood Pack. 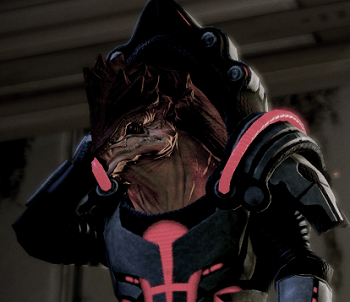 "Fine. We'll put 'em down. Then I'm coming in there and we're gonna talk salvage."

Krogan leader of a Blood Pack band on Pragia. Hired by Aresh to help him secure the Teltin facility.

Eclipse is a mercenary corporation founded by an asari commando. They are employed as security or firepower. Mostly they use biotic or tech specialists (almost exclusively asari or salarians, though some humans are mixed in) along with robot support. They appear as commonly battled Mooks in Mass Effect 2, where they are encountered on places like Illium, Omega and Bekenstein. 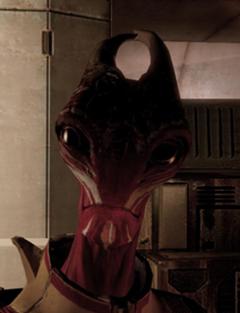 "I'm just here to make as much money as I can. We didn't come to Omega to be constrained by laws and regulations."
Voiced by: Dwight Schultz

The leader of the Eclipse mercs on Omega. Heavily involved in the red sand trade. He teams up with the other merc groups to take down Archangel. 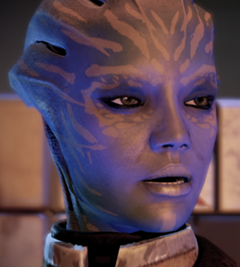 "I was just waiting for you to finish getting dressed. Or does Cerberus really let you whore around in that outfit?"
Voiced by: Shannon Blanchet 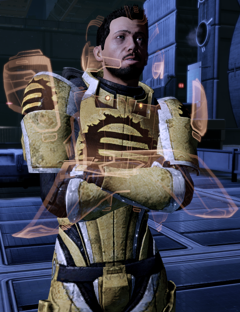 "You took a baby from the richest guy in the galaxy, lady. I don't know what your damage is, but you're not getting away with it."

An Eclipse mercenary working for Captain Enyala on Ilium, hired to turn over Oriana to her father, Henry. Despite his brief presence, he can suffer one of the series' most memorable deaths at Shepard's hands. 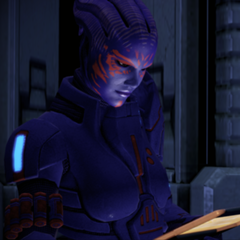 "At least I can take pleasure in turning your head into a pulpy mass!"
Voiced by: Gwendoline Yeo

Leader of an exclusively Asari band of mercenaries on Ilium in the Nos Astra spaceport, and responsible for smuggling Samara's target off world. 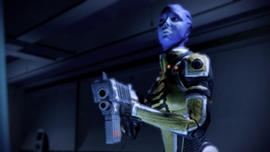 "I thought being Elnora the mercenary would be cool, but I didn't know what they were really like!"
Voiced by: April Banigan

A young asari mercenary with the Ilium branch of Eclipse. Pretends to be a Punch-Clock Villain, but in actuality, she's responsible for murdering Pitne For's partner. 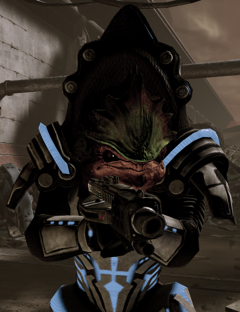 "You recite warlords, but you are the offspring of a syringe."
Voiced by: Michael Dorn

Head of clan Gatatog, Uvenk is a very traditionalist krogan who opposes the idea of reform for the krogan people, feeling it would only weaken them and take away who they are.