This page is for listing the tropes related to party members who first appeared in the second Mass Effect game. Specifically, the late half of the game. 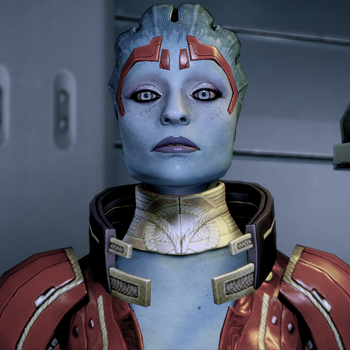 Find peace in the embrace of the goddess.
"I feel like Samara could shoot me in a very tranquil way, which doesn't make me feel any better about it."
—Joker's description
Voiced by: Maggie Baird

A member of an ancient cult of asari warrior monks who give up all personal property and spend their lives righting wrongs. They rarely leave asari space, but Samara is found on Illium, on the scent of a murderer she's spent centuries hunting. 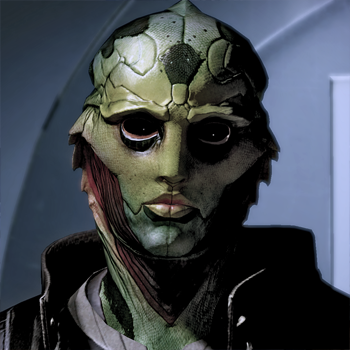 An assassin is a weapon. A weapon doesn't decide who it kills. The one who wields it does.
"Thane seems like the strong, sensitive, murdering type. You know those are always great to have around. A real cuddler."
—Joker's description
Voiced by: Keythe Farley

A drell assassin who is said to be the best in the galaxy. He used to take contracts for credits, but is spending his last days trying to right wrongs. He is a romance option for a female Shepard.