This page is for listing the tropes related to party members who first appeared in the third Mass Effect game. 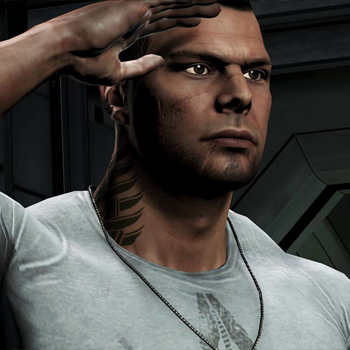 Not supposed to salute you, either.
''Think you can dance and talk at the same time?''
Voiced by: Freddie Prinze Jr.

James Vega is a lieutenant in the Alliance Marines. He stars in the short comic Mass Effect: Conviction, which ends with Anderson appointing him Shepard's guard while they're in the brig post-"Arrival", and is the main character of Mass Effect: Paragon Lost, an animated film set during Mass Effect 2. 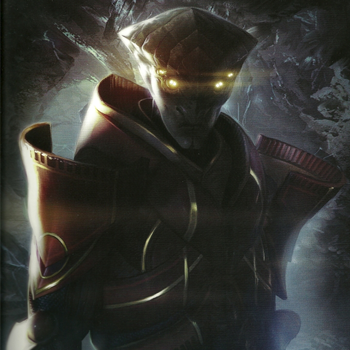 I am the anger of a dead people, demanding blood be spilled for the blood we lost.
"Stand in the ashes of a trillion dead souls, and ask the ghosts if honor matters. The silence is your answer."
Voiced by: Ike Amadi

A Prothean found in a stasis chamber on Eden Prime. Javik is a veteran of the Protheans' centuries-long war with the Reapers, spending all of his life as a warrior, and was intended to be part of a plan to outlast the Reaper invasion by sealing millions of soldiers and specialists in stasis pods to emerge after the Reapers departed, and rebuild their civilization (needless to say, this didn't work out right). Javik was one of many Prothean "avatars" of various concepts and virtues such as bravery, compassion, and loyalty; in Javik's case, however, that virtue was vengeance, and he joins Shepard's team to enact revenge for the total destruction of his people. Made available in the day-one DLC "From Ashes". 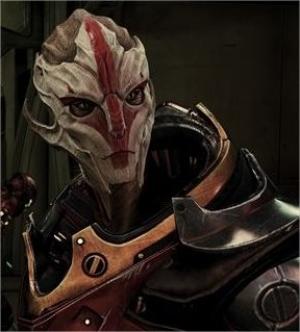 A female turian who joins Shepard and Aria in taking back Omega from Cerberus in the Omega DLC. Leader of the Talon mercenary group, and Aria's ex. 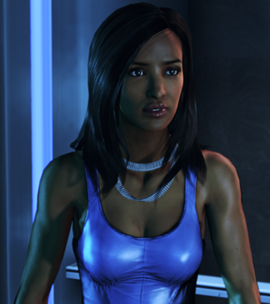 A human Alliance officer who assists Shepard throughout the Citadel DLC. Her expertise lies in tracking hacking attempts and monitoring communications of Alliance channels. Of course, that turns out to be a lie-she's really a Cerberus operative who escaped indoctrination and revived a clone of Shepard to help her pursue its original mission of human supremacy.