This page is for listing the tropes related to the main antagonists who first appeared in the second Mass Effect game. 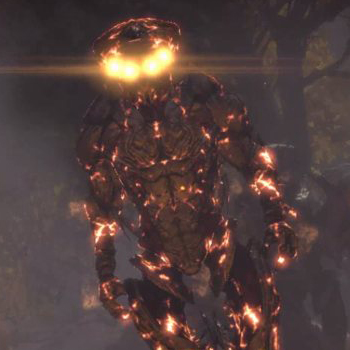 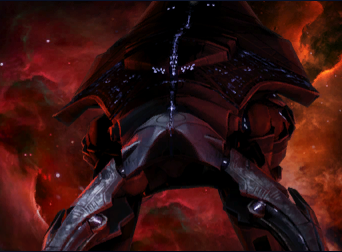 The name for Collector drones possessed by the General to fight Shepard directly. As revealed by the ending, however, the Collector General himself is also possessed by Harbinger, who's actually a Reaper. If the Arrival DLC mission is done after the suicide mission, Shepard can have a brief conversation with it near the end. (If done before the suicide mission, Shepard talks with an image of the Collector General instead.) Mass Effect 3 (the Leviathan DLC, to be specific) further reveals that Harbinger is not just a Reaper — he was the first. 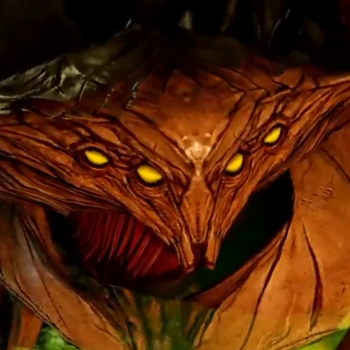 HUMAN, YOU'VE CHANGED NOTHING.
"YOU PRETEND TO BE EVERYWHERE AT ONCE. I ALREADY AM."
Voiced by: Keith Szarabajka

A special Collector that leads and coordinates the Collectors as a whole. Offering lucrative technological rewards in exchange for live test subjects, amongst the beings he's successfully retrieved were two dozen left-handed salarians, sixteen sets of batarian twins, a krogan born of parents from feuding clans, and two dozen quarians that never left the Migrant Fleet, but nobody knows what happens to the individuals concerned after the exchange is completed.

In addition, the General appears interested in human biotics, as well as Shepard in particular and the human race in general. Just as Saren used Husks to support his army of geth, the General also uses Husks to support his Collectors in a battle, but with three new types: Abominations (suicide runners), Scions (long-range bazooka men) and Praetorians (crab-like bosses).

The General appears to be the leader of the Collectors, using his drones as intermediaries to make contacts in the seedy criminal underbelly of the Terminus system. His most notable accomplishments include sending Golo to capture Paul and Gillian Grayson in Ascension, ordering the Collector Cruiser to destroy the Normandy and murder Commander Shepard in the prologue of Mass Effect 2, consorting with the Shadow Broker to acquire Shepard's body in Redemption, and ordering his drones to personally kidnap entire colonies of humans throughout the rest of the second game.

Apart from a brief holographic image appearing in Joker's cockpit and a possible encounter with him on Arrival, you never confront the General face-to-face, but you hear his taunts constantly, and he possesses various Collectors to fight you off.

Like Saren in the first game, the Collector's theme is used as the Game Over music.

"Chandana said the ship was dead. We trusted him. He was right. But even a dead god can dream. A god — a real god — is a verb. Not some old man with magic powers. It's a force. It warps reality just by being there. It doesn't have to want to. It doesn't have to think about it. It just does. That's what Chandana didn't get. Not until it was too late. The god's mind is gone but it still dreams. He knows now. He's tuned in on our dreams. If I close my eyes I can feel him. I can feel every one of us."
Voiced by: N/A

A two-kilometer-long Reaper orbiting the Brown Dwarf Mnemosyne. It maintained a mass effect field that kept it from falling into the failed star, but massive holes had been blasted and melted into parts of the hull and remain unrepaired. The only logical conclusion is that the Reaper "died" or was at least reduced to minimal functioning a long time ago. According to Cerberus research, it was fatally damaged by fire from a mass accelerator weapon built by an unknown, long extinct species (presumably as a last act of defiance before the Reapers exterminated them).

The Illusive Man sends Commander Shepard to the Reaper to investigate why Dr. Chandana's team has ceased communication and to search for the Reaper's Identify Friend/Foe tag, which would allow the Normandy to safely utilize the Omega 4 Relay. When Shepard's squad boarded the Reaper, it's kinetic barriers engaged, trapping them aboard. The barriers can only be disengaged by destroying the ship's core, which will also disengage the mass effect field keeping the Reaper from falling into Mnemosyne's gravity well. Fighting through the husks made from the Cerberus team, Shepard acquires the IFF and reaches the core. There, the squad encounters a lone geth, who is incapacitated by a wave of attacking husks. Shepard fought through waves of Husks and destroyed the Reaper's core. They and their squad escaped with the inactive geth to the Normandy just before the Reaper was destroyed by Mnemosyne's atmosphere. 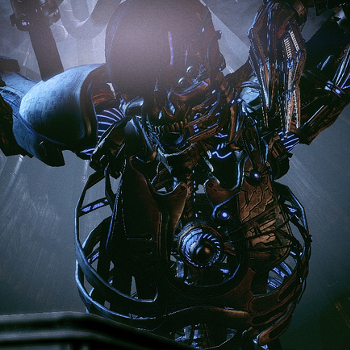 A new Reaper that was being constructed by the Collectors. It was the reason for the Collectors abducting human colonies in the Terminus systems and taking the colonists to the Collector base. The colonists were broken down into genetic material and pumped through tubes that lead to the Reaper itself. The Reaper was destroyed by Commander Shepard while it was largely incomplete.