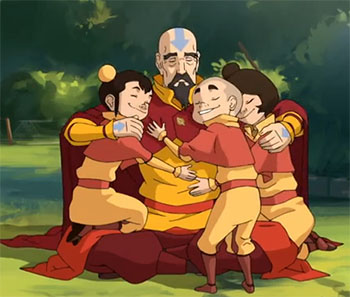 Being the sole surviving Air Nomad, Avatar Aang had a need to pass on his Airbending lineage and heritage. His youngest child, Tenzin, was this continuity. These are tropes which apply generally to Tenzin's family; the direct descendants of the original Air Nomads as well as his siblings - the children of Avatar Aang and Katara, and also any animal/spirit familiars of such family members. 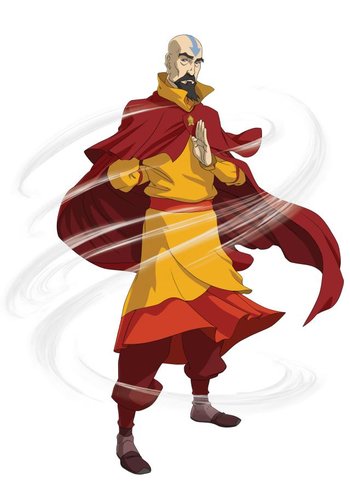 "I am not a reflection of my father. I am Tenzin."

Tenzin is an airbending half-Air Nomad/half-Water Tribesman, and Aang and Katara's youngest son. He is a councilman representing the Air Acolytes for the United Republic; following the events of Avatar: The Last Airbender ("last airbender" now a misnomer), the airbenders in the United Republic now consist of him and his family, and the Air Acolytes, a group of non-airbenders who have chosen to dedicate themselves to the continuation of Air Nomad traditions. Seeing as he is the only living master airbender in the world following Aang's passing, he becomes Korra's airbending teacher.

Avatar Aang
Avatar Aang was Tenzin's father, and his passing heralded the birth of the current living Avatar, Korra. For tropes pertaining to him, refer to The "Past Characters" page.
Katara
An accomplished master waterbender in her own right, Katara is also known as the widow of Avatar Aang and the mother of his three children. For tropes pertaining to her, refer to The "Past Characters" page.
Pema

"If you're going to be bending giant boulders, do it outside!"

Tenzin's loving wife and mother of his children. She shows a forceful and somewhat wry personality, and although not a bender, she is an Air Acolyte and dedicated to following the Air Nomad way of life.

"I will make no such promises."
Click here for her Book 4 appearance. 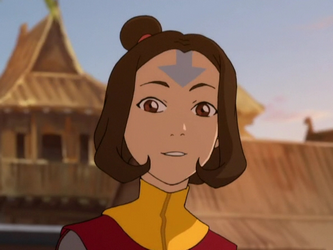 Jinora is Tenzin and Pema's oldest daughter. More reserved than her siblings, shown to be a polite little bookworm. However, under her sweet exterior she is still playful and hides a witty tongue. 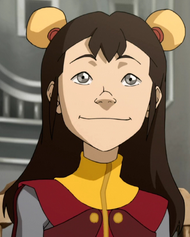 Ikki is Tenzin and Pema's younger daughter. She's incredibly hyperactive and playful, and can be quite annoying, both on purpose and by accident.

"Be the leaf!"
Click here for his Book 4 appearance. 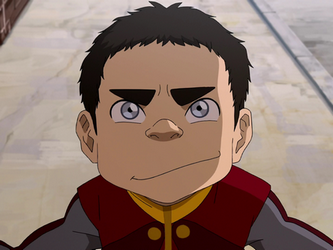 Meelo is Tenzin and Pema's older son and third child. At five, he's hyperactive and more than a bit silly. He shows great skill at airbending despite his youth. 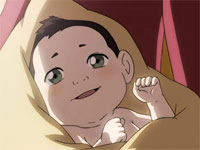 Tenzin and Pema's fourth child (and second son), who was born in "Turning the Tides" near the end of Book One. 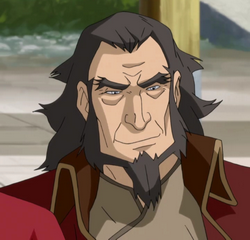 "The paperwork's gone through little brother. From now on it's 24/7 Bumi time!"

The eldest child of Aang and Katara, Tenzin's older brother, and a commander in the United Forces. After the Harmonic Convergence, he —along with many others— became a bender. An airbender, to be exact. 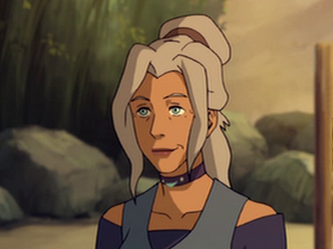 The middle child of Aang and Katara, Tenzin's older sister, and a waterbender. 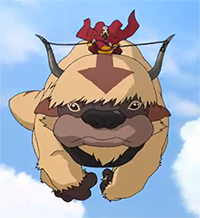 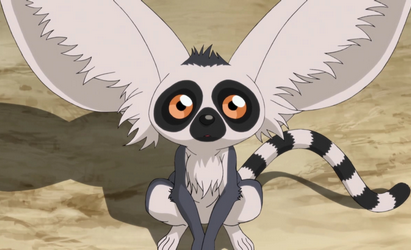 The pet flying lemur Meelo befriends in Book 2 and officially keeps as a pet. 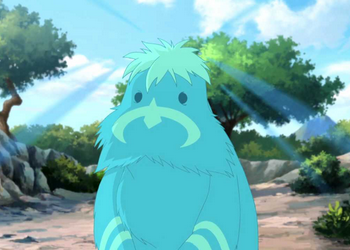 The pet dragonfly-rabbit spirit that Bumi befriends in Book 2 and keeps him as a pet. 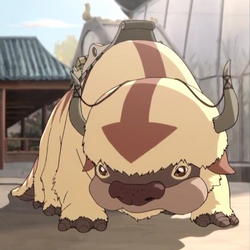 Jinora's pet Sky Bison that helped her and her siblings look for Korra in Book 4.